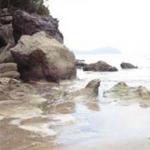 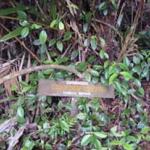 The British colonial administration turned the wild place into a protected conservation area in 1957. In the early 1960s Barbara Harrisson wife of the then long-serving Sarawak Museum curator Tom Harrisson pioneered the release of rehabilitated orang-utan into the wilds of Bako. The experiment was not successful as Bako National Park was too small for sustenance and the rehabilitation program continued successfully in Sepilok near Sandakan.

Although Bako is the smallest of Sarawak's national park (2,727 hectares or 6,738 acres) it has an extraordinary diversity of vegetation types and wildlife. Bako is popular because it is so close to Kuching and easily accessible. Located within the Muara Tebas Peninsular, a sandstone plateau and between the mouths of Sarawak and Bako rivers it can be reached by regular public buses and taxis.

The three quarter hour stage bus journey will take one to Kampong Bako, a riverside village at the mouth of Bako River. From the village it takes 30 minutes by noisy outboard powered-engine sampans to reach the Park headquarters, weather and tides permitting. However on my journey one fine morning my boat was stranded 10 minutes after I clambered on board as the prow continued to hit the sandbanks. Several times the engine sputtered for a while before coming to a stop and the boatman gave up despite such valiant attempts to push forward. While waiting for the tides to come in, the morning sun beat down mercilessly on the boatman and myself. Within the confines of the open sampan and surrounded by sea water there was really no where to run for cover. Despite what seemed to be eternity while waiting for an hour for the tides to rise my boat ride was an adventure itself as the skilful boatman could safely ride the waves at high speed.

On my way we saw several bamboo pole structures 5 meters high laid out perpendicular to the shoreline. These structures are to lay fish and prawn traps and for nets to be strung below the water level. On reaching the Park headquarters at about 10:45am the boatman left me some 80 meters from the shoreline as the jetty was too shallow for the sampan to land. Pulling up my pants I gingerly waded through the muddy waters holding dearly onto my pair of shoes.

Three factors interact to endow upon Bako the remarkable diversity of habitats, plant-species and animals and other living beings and creatures from the sea. They are the action of waves and the effects of salt, the excessive precipitation and the presence of sandstone substrates. Within such a small area it is possible to see within Bako every type of vegetation found in the island of Borneo. There are seven distinct eco-systems: beach vegetation, cliff vegetation, kerangas (in Dayak language meaning 'poor soils') or heath forest, mangroves, dipterocarps (tropical rainforest), grasslands and peat swamps. The mangroves are often interspersed with nibong palms with spiny prickles on their trunks.

One can explore these eco-systems via the jungle trails. There are 17 well-marked jungle trails (some criss-crossing one another) running more than 30 kilometers within Bako. Along each of the exotic-named trails paint of a certain color are splashed on rocks and tree trunks to distinguish a particular trail. At every junction there is a map depicting the entire park and marking the 'you are here' position. The trails ranged from the 0.5-kilometer long Tanjung Sapi trail to the 5.75-kilometer Telok Limau trail which takes 14 hours return journey.

As a result of the sandstone plateau the top-soils are mainly thin, sandy soils and poor in nutrients. This explains the presence of cliff vegetation, kerangas and grasslands. Typically trees and plants within such types of vegetation are stunted, sparse and exposed sandy patches are found here and there. Consequently plants which thrive on such infertile sandy soils are commonly found such as the pitcher plant, sundew and ant plant.

The pitcher plant with a slender lid has a slippery rim along the mouth of the pitcher. Insects perching on the rim can slip and fall into the pitcher and drowned in the soupy water and eventually digested by the carnivorous plant.

Insects provide the nutrients to the sundew when they rest on the leaf which bears sticky-tipped hairs. The leaf curls back thus trapping the poor victim.

Ubiquitous within the kerangas is a fascinating flowerless seed plant known as the cycad which looks like but it is not a fern or a palm. The cycad evolved from a primitive plant which flourished when dinosaurs ruled the world at the time when there were only non-flowering plants. The male cycad has a cone while the female has egg-like seeds borne on the leaves.

The erosive powers of the waves working on the sandstone substrates result in the formation of many sea stacks which are colorful grotesque-shaped natural monuments by the shoreline. Many of the escarpments inland have fossils of sea shells embedded on the cliff face. This indicates that in a different geological era the sea had covered a greater part of Bako. The sandy nature of the structure yielded a number of sandy beaches along the coast-line.

It is usual to encounter long-tailed macaques, silver-leaf monkeys, palm squirrels and if one is lucky to spot a family of proboscis monkeys which are found in the swampy areas near to the coast. Bako is home to about 150 rare proboscis monkeys found only in Borneo and even then in a few isolated areas.

The male is an odd-looking creature with a huge pendulous nose and a large pot-belly while the female has a snub-nose. They are arboreal (tree-dwelling) moving about the forest and mangroves in small groups and feeding on leaves, shoots and sour fruits and seeds. Proboscis monkeys are not found in zoos because their digestive system only allow them to feed on the leaves, shoots, fruits and nuts of a few types of swamp-land plants found only in the wilds. It is not unusual to hear them fall with a loud thump on the spiny-riddled trunks of the nibong palms but they remained unscathed and are swiftly up and about oblivious to the formidable thorns.

The small skink or sun lizard is often seen basking on rocks or scurrying away as one approaches them. One can frequently meet the water monitor lizard along the beaches as the shore provides rich pickings to this scavenger which feeds on both carrion and live prey.

Bako's nocturnal creatures include the flying lemur or colugo, mouse-deer, bearded pigs, bats, tarsier, slow loris and palm civet. The flying lemur is a fantastic glider as its webbed membrane connecting its feet to its tail enables it to glide up to 100 meters from one tree to another. The long-tailed macaques can be found almost everywhere. They are fond of rummaging through rubbish bins, snatching food, drinks and valuables including cameras, wallets and sunglasses when unattended. Visitors must always keep their doors and windows closed as they are a nuisance. They are often found in groups of large numbers. The silver-leaf monkeys are however timid creatures and keep a distance from humans. The best times to watch nocturnal wildlife are at the break of dawn and around dusk.

Bako is a great place for bird watching as over 150 species inclusive of migrants, vagrants and residents and ranging from waders, seabirds and forest types have been sighted and recorded. The best time of the year for bird watching is during the northern winter when many birds from Siberia, North China, Mongolia, Korea and Japan fly to Borneo and Australia to escape from the cold. Like in many parts of Sarawak whose sobriquet is 'The Land of the Hornbills' sightings of these large birds distinguished by their long and curved yellow beaks are common. They make their presence felt from afar by their loud and gurgling cackles.

Accommodation facilities consist of chalets, jungle lodges, hostel-style rooms and camp sites. They are close by the park headquarters. Video and slide presentations on proboscis monkeys and Bako wildlife are available on request. There are informative brochures and posters on mammals and birds of Borneo for visitors to take back. Next to the park headquarters is a cafeteria which provides drinks and food at reasonable rates. Because there is so much to see and experience and due to its isolation from the hustle and bustle of city life it is small wonder that Bako is very popular destination for travelers and tourists.