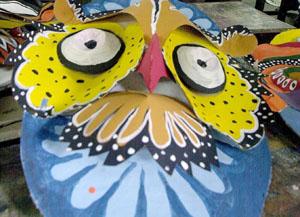 Color mask made by students at Bangladesh's Art Institute. 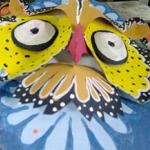 Bangladesh's only scroll artist Shambhu Acharya learnt his skills from his father in a remote village in the south of the country, but is now putting on exhibitions in the capital to revive the dying art. "I am not only trying to continue the work my forefathers did, but also bring scroll art back into mainstream as this form of art is part of our rich heritage," he said. Acharya, who is in his 40s -- many villagers in Bangladesh do not know their exact date of birth -- is the ninth generation of his family to paint scrolls which has been an art form in Bangladesh since the 16th century.

Every scroll painting tells a story and in the countryside people used to gather to listen to songs based on the paintings to the tune of an ek tara (one string) guitar and a local drum called a dhol. But in recent years scroll painting virtually died out as the artists found more lucrative work.

Acharya is the only one left and wants to pass on his skills to his son and three daughters to ensure the art form lives on. He uses natural colours, glue made from plants and crushed bricks to paint on cloth and paper scrolls.

"I will return to using brushes made of goat and cow hair like my forefathers did for nine generations as they give different effect to painting," Acharya said. "I sometimes work for 14 to 16 hours straight and it is an addiction as much as my profession ... I am never tired," he told AFP as he showed with pride his 45 works on display this month at Gallery Chitrak in Dhaka.

"The artists are trying to find their roots and it is very important to know ones root," said Ramendu Majumder, a celebrated actor and art connoisseur who organised the show. "Mr. Majumder found me in my village and told me I must work hard and should not worry about my stomach ... this exhibition is the outcome of his support," Acharya said.

The artist worked relentlessly for more than a year to finally present his first solo exhibition which has been successful in attracting huge numbers of art lovers as well as sales. The most expensive scroll "Gazi Pat" was sold for 15,000 taka (260 dollars). It tells the story of the Bengali Muslim saint Ismail Gazi who, accompanied by his tiger, acquired heroic virtues.

Acharya's work was highlighted in 1999 when he was part of the Arts Worldwide Bangladesh Festival at the Spitz Gallery in London. But despite international acclaim, the scrolls were still forgotten in Bangladesh -- until now.

Art experts said it was the first time such scrolls had been on show in Dhaka in many years. Acharya is not alone in the struggle to revive Bangladesh's dying artforms. Azharul Islam Chanchal uses terracotta to make masks, statues of fish and other animals and decorated mirrors. "I travel across Bangladesh to encourage villagers working with clay to pick up terracotta as this popular form of art is slowly vanishing," he said.

At Dhaka's Institute of Fine Arts gallery, Chanchal and two of his friends last month had an exhibition of terracotta which were popular in this part of the world even 2,000 years ago. "Our clay work, which is inspired by terracotta work of the Hindu Pal dynasty, Mughal rulers and Australian aboriginal art, was an instant success," Chanchal told AFP. "Now I think our mission will be a success as people too want the revival of this dying art."

"The patience of waiting while the clay is in the fire is the real love of this art as you really don't know the outcome," said Chanchal, whose work sells for between 100 and 6,000 taka (1.7 to 103 dollars). Celebrated painters Ranjit Das and Shishir Bhattachajee told AFP the urge for revival was encouraging. "For any country its heritage is an asset and we simply cannot afford to lose it," said Bhattacharjee.