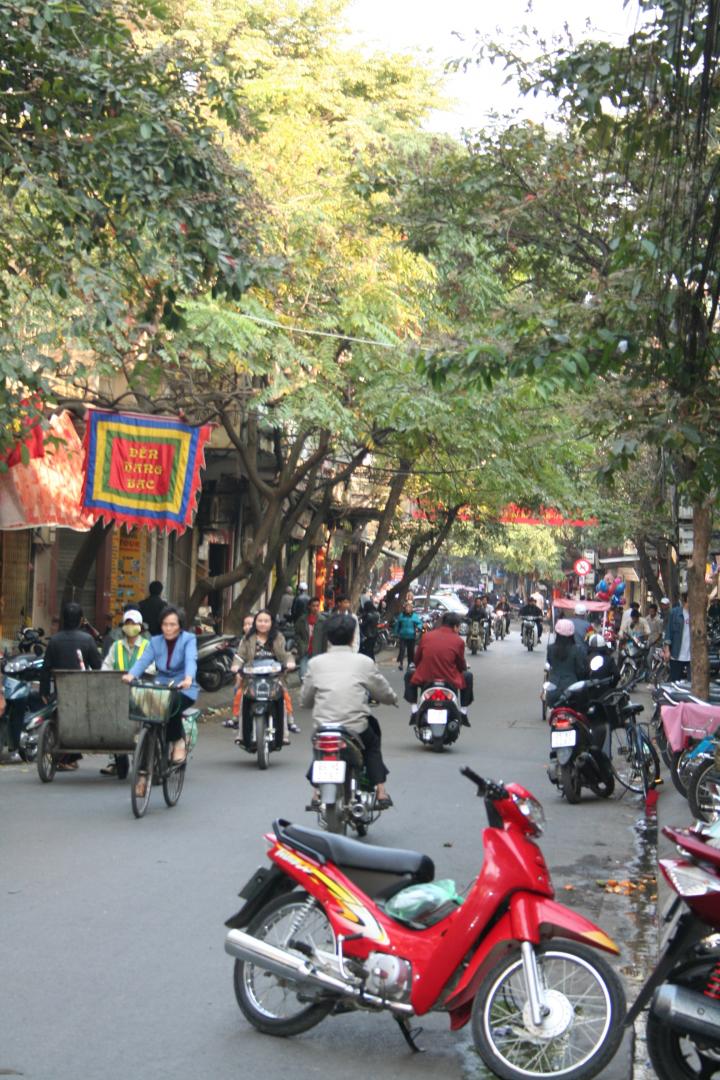 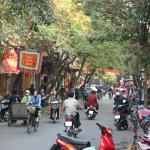 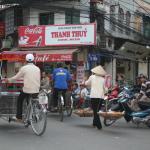 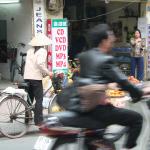 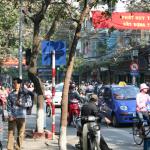 Beep-Beep Beep-Beep! I let off these four short bursts of the horn as I approach the blind corner of the narrow Hanoian alley I must drive down as I exit my house. It is Tuesday morning and I am about to head down to “Saigon”. Well, not literally, but the 40 minute motorbike ride south, out of Hanoi itself, means it may as well be as far away that I have to drive. The trip will take even longer today as it is cold, and rainy, so the usual peak-hour madness will take on a whole new element. It’s early, 7:15am, but already I can hear the sounds that lurk on the main road, which indicate the roads are packed with motorbikes, bicycles, cyclos, taxis, and buses, all vying for their share of the limited space. It worries me how many more cars are filling the Hanoi roads with every day- whilst the wide boulevards manage to fit about 6 lanes of motorbikes across, they certainly were not made for cars to have to share as well.

I continue weaving down the alley, skirting around puddles and pot holes- which are numerous, and like the cars, are growing in number every day- and avoid other possible obstructions such as baskets of fruit in a store front and a small child running, arms a-flailing as he leaps across the narrow alley to fetch a ball that is now also in my path. Beep-Beep! Two sounds to warn the kid I’m coming through. Beep-Beep! Another two sounds, to tell the bicycle rider in front of me that I am coming past, squeezing between him and the wall that forms the alley.

The alley now ends and I have to turn left onto Doi Can, a busy road at all times of day. The moment this peak hour rush subsides, the school down the road will break for lunch, and the commuters will be replaced by laughing school kids walking and cycling home for their mum’s home-cooked lunch. Teenagers will double their friends on their bicycles, their handle bars wobbling as they attempt to steady their bike and negotiate the traffic with their mate sitting uncomfortably on the back. Most of the school kids are too young to get on a motorbike just yet, but of course there is always a few who are either of-age or riding illegally, with at least 3, but usually 4 or 5 teens squeezed on the motorbike seat.  There will be a small Vietnamese girl driving the bike, her long, shiny black hair blowing in the wind behind her and into her friends’ faces as they drive. The really small children will wait to be picked up by mum, deftly climbing up on the seat behind her when they spot her, and holding on tight as she whizzes her child home.

But for now, my biggest concern is not the lunchtime traffic but that of the morning peak, and getting out of alley 209 and onto the road. The more I ride, the easier it gets to just drive out into the traffic in the lane to my left as it flows towards me, so I can get out into the right lane. When it is this busy, it is useless waiting for a break in the traffic, it will never come, so I take a deep breath, and pull out into the traffic. It magically just moves around me and I smile wryly to myself as I safely make it into the right lane and continue my drive.

Today, the sky is not raining, but the air is wet. It is not wet enough to don my poncho…I consider it, but see none of the locals are wearing theirs, so perhaps the morning mist will clear. Already my glasses are speckled with teeny, tiny droplets of water that make a frosty cover over my lenses and make it difficult for me to see. My hands are icy cold from the brisk wintry-like air and I nestle my chin in my scarf for extra warmth for the ride ahead. The road glistens from the wet sheath that covers it, making it slightly slippery to drive across.

I weave down Doi Can- around basket ladies carrying their heavy wares over their shoulders who cross the road as nimbly as they can while carrying 20 kg of fruit in baskets on either side, balanced deftly on the bamboo pole across their neck; around people walking ever-so-slowly, letting the traffic flow around them as they try to carefully cross the road to the other side; around kids cycling slowly along on their way to school, bag slung over their blue and white uniformed shoulder; around other motorbikes with heavy loads on the back; I slow down as the big truck behind me hoots insistently, warning us all to move-it or be moved;  I take an extra wide berth as I pass the big Number 9 bus that could pull out carelessly into the traffic at any time; I swerve slightly when I hear the booming air horn of a car trying to get past us smaller motorists; avoid being clipped by teenage hoons who are weaving ridiculously quick between the smallest space in traffic; and move around a motorbike that is driving towards me, but in my lane, he’s driving the wrong way down the right lane, but nobody cares.

I make it to the first hairy intersection, Doi Can and Ngoc Ha, a four-way crossroads without any lights. Beep-Beep Beep-Beep Beep-Beep! This intersection warrants repeated honks as I make my warning that I am coming through, that I deserve right of way over the motorbikes that might try and cut in front of me as I continue driving straight ahead. I move around some bikes that are also trying to drive straight ahead, but at my right angle, and somehow manage to keep moving without even using my brakes once and get through the lane of traffic moving in the opposite direction. God knows how there are not more collisions.

The one road rule here which is actually enforced, and is therefore followed, is stopping at red lights. I’m approaching my first set of lights. They are already red, so I join the mass of motorbikes waiting to go. There is a red counter, counting backwards from 60, indicating how long the lights will be before they go green. I can see the smoke fumes from the motorbikes spewing into the dank, cold air. A little kid with chubby cheeks, all wrapped up with beanie and scarf and sitting in a motorbike kiddy chair attached to the front of his dad’s bike, stares at me with big eyes and I stare back. The counter reads 15, and the Vietnamese are getting impatient. People start to rev their motorbike engines, creating a dull rumble sound which is actually quite awesome to hear when among the throng.

10, 9, 8…the revving continues, louder and more persistently. 7, 6, 5…some people at the front of the pack get sick of waiting and take off before the green light says go. 4, 3, 2, 1…Beep! Beep! Beep! Roar!! The moment the green counter hits 60 people rev their engines in earnest and start to go. The motorbikes in front are honked, as though they need reminding that it is time to go at last! The seething pack of traffic inches forward and  in unison people’s left legs lift off the ground and rest on the bike’s foot rest as they get into a forward motion and gain enough speed to have balance.

The swerving, the weaving, the stopping, the starting, it continues like this the whole way to the highway. A constant state of full awareness is required. People will annoyingly pull out in front without even looking behind, expecting (perhaps through some unspoken law) the traffic to see them and move out of the way in time. Once on the highway the speed increases, but only marginally. The trucks are bigger, but they can be useful to use as a barrier against side-coming traffic when driving through a four-way intersection without lights or orange lights that are flashing. I see some funny things that make me chuckle. There is a motorbike with baskets strapped to the back, and inside the baskets are about 10 pigs, all squashed in together, and one of the pig’s snouts is sticking out through a hole in the basket’s weave. Most distressing is seeing some fully-skinned and very stiff looking dogs tied to the back of another motorbike as it whizzes past me….most certainly on their way to a Thit Cho restaurant to be consumed by the carnivorous Vietnamese. I carefully drive around a motorbike which is transporting a huge 2 metre by 2 metre mirror, carefully being held as it is wedged between the driver and passenger, it looks so precarious, but so common-place here at the same time.

Beep Beep! Goes my horn as I drive around a friendship fleet- three bikes riding side by side so the group of friends can talk together as they ride- laughing and chatting, carefree, oblivious to the noise and frenetic movements which surround them…and the people trying to move around their line of traffic which consumes the whole lane.

I have an internal chuckle as I wait at one set of red lights, and notice some locals driving onto the footpath rather than wait for the heavy jam of motorbikes to possibly ease. After all, why use the packed, non-moving road when there is perfectly good space on the footpath to use? Once one person decides to take the footpath road, a few others follow suit, so there is now a new lane of traffic driving around a green tea stand with an old man in a beret smoking through a bamboo pipe, and through a pho stall where a lady is sweeping with a straw broom. Two ladies in conical hats standing on the footpath look at the bikes in their path with a momentary glance and continue their gossiping, their faces hidden beneath their pointed hats. A couple are sitting next to me, the woman snuggled cozily into her partner’s back, hands in his pockets and her chin resting on his shoulder as they chat.  This is the closest I see of public displays of affection in this inwardly affectionate country.

Beep Beep! I warn the traffic at my final intersection on this 40 minute journey that I am coming through, I bump over the Giap Bap railway tracks, glide down a small decline, swerve around a huge hole in the road, overtake a man pushing a cart with goods and come to a halt at my destination. Beep Beep! Just one more sound of the horn for good measure, a congratulatory one to myself for making it so far…the security man marks my seat with a chalk number, hands me my numbered ticket that coincides, and I find a space to park the Mio. I kick-down the foot pedal, lock the handlebars, unclasp my helmet and wipe the sprinkles of wet off my coat. I hop off the bike, and hear a “Hello!” then a Beep Beep! I look out to see one of my students also arriving to class for his first journey of the day. I smile at him, and step into class, pocketing my keys, and prepare for the next journey ahead- teaching English class for another day.

A Photo Essay: An Afternoon in the Alley