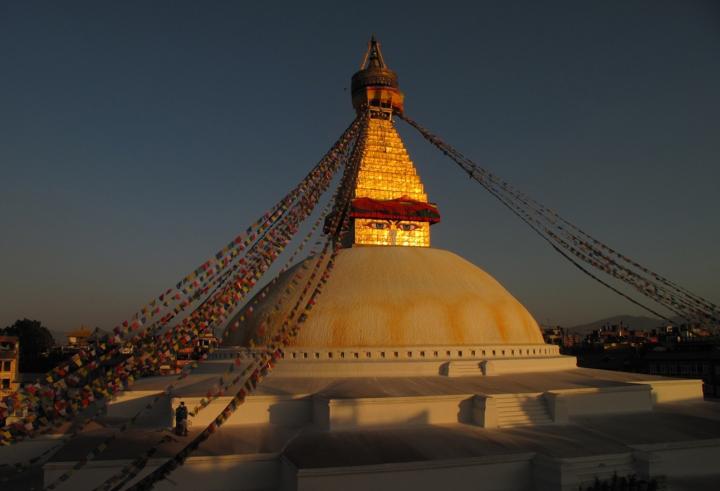 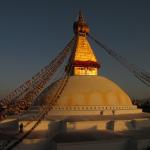 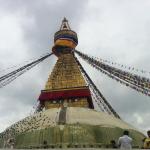 Boudhanath Stupa (or Bodnath Stupa) is the largest stupa in Nepal and the holiest Tibetan Buddhist temple outside Tibet. It is the center of Tibetan culture in Kathmandu and rich in Buddhist symbolism. The stupa is located in the town of Boudha, on the eastern outskirts of Kathmandu.
History
Bodnath was probably built in the 14th century after the Mughal invasions; various interesting legends are told regarding the reasons for its construction. After the arrival of thousands of Tibetans following the 1959 Chinese invasion, the temple has become one of the most important centers of Tibetan Buddhism. Today it remains an important place of pilgrimage and meditation for Tibetan Buddhists and local Nepalis, as well as a popular tourist site.
What to See
From above, Bodnath Stupa looks like a giant mandala, or diagram of the Buddhist cosmos. And as in all Tibetan mandalas, four of the Dhyani Buddhas mark the cardinal points, with the fifth, Vairocana, enshrined in the center (in the white hemisphere of the stupa). The five Buddhas also personify the five elements (earth, water, fire, air and ether), which are represented in the stupa's architecture.
There are other symbolic numbers here as well: the nine levels of Boudhanath Stupa represent the mythical Mt. Meru, center of the cosmos; and the 13 rings from the base to the pinnacle symbolize the path to enlightenment, or "Bodhi" — hence the stupa's name.
At the bottom, the stupa is surrounded by an irregular 16-sided wall, with frescoes in the niches. In addition to the Five Dhyani Buddhas, Boudhanath Stupa is closely associated with the Bodhisattva Avalokiteshvara (Padmapani), whose 108 forms are depicted in sculptures around the base. The mantra of Avalokiteshvara - Om Mani Padme Hum - is carved on the prayer wheels beside the images of Avalokiteshvara around the base of the stupa.
The base of the stupa consists of three large platforms, decreasing in size. These platforms symbolize Earth, and here you can look out at the mountains while listening to the chants of the devout doing kora, walking around the stupa praying.
Next come two circular plinths supporting the hemisphere of the stupa, symbolizing water. As at Swayabunath, Bodnath is topped with a square tower bearing the omnipresent Buddha eyes on all four sides.
Instead of a nose is a question-mark-type symbol that is actually the Nepali character for the number 1, symbolizing unity and the one way to reach enlightenment—through the Buddha's teachings. Above this is the third eye, symbolizing the wisdom of the Buddha.
The square tower is topped by a pyramid with 13 steps, representing the ladder to enlightenment. The triangular shape is the abstract form for the element of fire. At the top of the tower is a gilded canopy, the embodiment of air, with above it a gilded spire, symbolic of ether and the Buddha Vairocana. Prayer flags tied to the stupa flutter in the wind, carrying mantras and prayers heavenward.
The main entrance to the upper platform of Bodnath Stupa is on the north side. Here Amoghasiddhi, progenitor of the future Buddha, presides. Below Amoghasiddhi is the Buddha Maitreya, the future Buddha.
Surrounding Boudhanath Stupa are streets and narrow alleys lined with colorful homes, Tibetan Buddhist monasteries, and street vendors.
Festivals and Events
During the festival of Losar (Tibetan New Year) in February or March, Boudhanath hosts the largest celebration in Nepal.