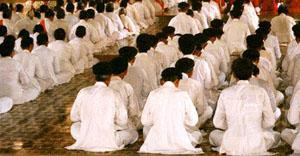 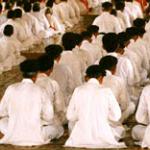 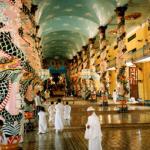 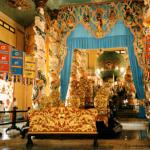 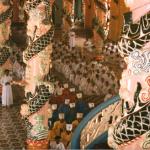 Saigon may well be an alluring city. But if you need a break - physically, mentally and spiritually - from this city's frenetic pace during your stay, there are plenty of day trip options out of the city to choose from. Saigon in fact doubles up as great stepping-stone in the south of Vietnam.

Many of the traveller's cafes and tour operators in the centre of town can organize these for you, as you're probably smart enough to pass on the public transport. One such excursion and a real highlight for many travellers, is the Cao Dai Cathedral, or Great Temple of the Holy See. As its only 96kms out from Saigon - in Tay Ninh District - you can easily make the trip in one day.

The journey out to the cathedral, heading northwest out of Saigon on Highway One, is lined with pancake flat paddy fields and farmland. Its' present day tranquillity belies the ferocious fighting experienced here during wars of previous decades. Tay Ninh District is virtually encompassed by the foreboding lands of Cambodia, and the imposing Nui Ba Den - Black Lady Mountain -holds its lofty head high above. But it is the Cao Dai Cathedral, which surely merits first prize for the most prolific feature here.

Cao Dai actually means "palace or high tower", which is suitably apt. Built in 1927, the massive nine-story Cao Dai Temple is part cathedral and part pagoda. It is also a rude assault on your eyeballs. No signposts are required for this one, just a massive gateway signaling your arrival. Sunglasses may be obligatory not only for the brilliant mid-day light but also the outrageous mixtures of colours, icons and detail that greet you - and that's before you have even stepped inside the temple. Fluorescent shades of pinks and yellows scream out from its exteriors and rococo walls and mosaic-mirrored tiles glint in the sun. A giant Divine Eye beams down sandwiched between two grand square towers. It appears like a Disneyland debacle constructed of sugary candyfloss. The buildings' weird mixture of styles, colours and icons found both in the interior and exterior mirror the hot-potch of religious ideals. Indigenous to Vietnam, Cao Dai, is in fact a fusion of the best from Taoism, Buddhism and Confucianism, with Christianity and Islam thrown in for good measure. Their hierarchy closely resembles the Roman Catholic Church and their colour scheme seems lifted straight from a Hindu Temple. Cao Daoism was founded in Vietnam only as recently as the 1920's as the answer to the ultimate ideal religion and insists that its' earth-based intermediaries or messengers include such luminaries as William Shakespeare, Joan of Arc and Napoleon Bonaparte!

Within what is in fact the sects' main headquarters, males must enter on the right and females to the left and shoes have to be removed before entering the massive main hall. From the bustle, heat and dust of the outside world comes inside the Cathedral immediately a sense of calm, peace and light.

Ever-increasing numbers of international tourists silently pad around in sticky feet, politely inquiring whether they can take photos. Serene white-robed persons waft through as if on another planet. Mingling with the visitors and attending to offerings, they surprisingly do not seem to feel invaded and happily answer inane questions. The Divine Eye encased in a triangle is a recurring motif on both walls and ceilings. Gaudy pink pillars guarding the sacred inner nave are intertwined with snarling green dragons complete with elongated red tongues. Fluffy clouds, stars, bright pink lotus blooms and a huge glittery blue sphere above make this temple appear like a far-out hallucination seen through illegal substances. After extensively checking out the extraordinary murals and central altar - which is heavenly adorned with fruit, flowers - and curiously statues of storks - it's time to observe the ceremonies. The sects' services are held four times a day - the most convenient one and appropriately the most heavily attended is the midday service. Many tour buses schedule this into their day trips. Before the ceremony is about to commence, you are led up a narrow stairwell. Just behind the main balcony, a small string band accompanies the dozens of upwardly moving feet with weird and wonderful music. Once upstairs, you are then led onto the balcony, which runs the entire length of the cathedral. This holds a frightening amount of inquisitive on-lookers, who all peer down on the proceedings. There is hushed silence up in the gods and an air of growing anticipation The Cao Dai worshippers spill out from annexes below, adorned in either white, red, blue or yellow flowing robes, signifying the Buddhist, Taoist and Confucian elements. Those with peculiar white pointy hats, emblazoned with that Omni-present eye, are in fact the priests of the sect. The sound of gongs now accompanies them as they take their positions on the vast floorspace below. Rows and rows of gracefully attired worshippers kneel down before the elevated altar. Gongs now beat time with the string instruments and harmonious voices chant like in some surreal dream. It almost seems sacrilegious to take photographs but amazingly, it's allowed and is an awesome photographic opportunity not to be missed. Friends' back home won't believe the descriptions of this cosmic temple, so you may find it to be a necessity.

The increasingly bolder music, uplifted off-tone singing and swirling incense is almost hypnotic. But after a while, the excitement of the proceedings dies off a little. The stuffy air, crowds and repetitive hymns make the eyes glaze over the dozens of souls below and loose a sense of reality. The service can last about forty-five minutes so many voyeurs at this point politely take their leave. They may wonder outside or to go to side annexes to look at fascinating murals involving such disciples as French poet Victor Hugo (apparently highly praised as a busy intermediary spirit) and Chinese Nationalist Leader Sun Yat Sen.

Graham Greene, the acclaimed British author who wrote the classic The Quiet American had himself toyed with the idea of converting to Caodism. But back home in London, he wrote "What on my first two visits has seemed gay and bizarre (was) now like a game that had gone on too long". Still, three million Cao Dai followers across Vietnam can't be wrong.