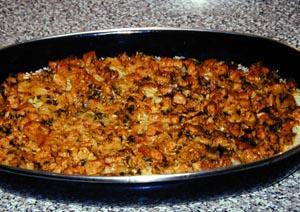 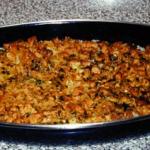 The city of Hyderabad, famous for its minarets and pearl-bazaars, is the capital city of the state of Andhra Pradesh, a bustling 400-year-old metropolis of some 6 million. Long renowned as the seat of the fabulously wealthy Nizams (rulers) who patronized expert artisans, famous for piercing and stringing pearls, it is a historic urban center that brings to mind romance and fabulous wealth. Like most of India's cities, it is a blend of fairytale and reality, a hodge-podge of old and new, forming an exotic background for its much sought after delightful cuisine.

Asaf Jahi, one of the viceroys of the Mughal Empire in the 16th century, broke away to establish his own independent state. Thereafter his descendents gave themselves the title Nizam. In 1798, a military and political alliance was signed between the Nizam and the British, which continued until India became independent. During these centuries, the city developed an unique cultural and culinary heritage, which remains well preserved.

Today, the people of Hyderabad are noted for their culture, artistic abilities and certain sophistication in manners. The fifth largest cosmopolitan city in India, it is a city of oriental glory, reminiscent of the great days of Indo-Muslim culture. It is well known for its hospitality and visitors to the city have always found a pleasant welcome and fine foods on which to dine.

India=s finest cuisine was developed, from the 15th to the 19th centuries, in the courts of the Mughal Emperors, who raised cooking to an art form. Today, in all parts of India and beyond, it is offered as that country's royal food.

The rich kitchen of these refined aristocrats included a fusion of the indigenous culinary traditions, which had been nurtured for almost 3,000 years by the Vedic and Aryan people, with the foods of Arabia, Persia, Afghanistan and the Turkish nations - later enhanced by including European touches.

Being an offshoot of the Mughals, the Nizams of Hyderabad were a party to this development of a fine distillation of taste. The Mughal court food and India=s predominant Hindu culture formed the basis of the kitchen of the Nizams. This cuisine, combining the Muslim Mughal cooking court with the historic foods of the country, produced a kitchen that was to become the definition of fine dining.

Even though vegetables are the king of foods in India, Mughal cuisine often includes goat and lamb, served in a variety of ways, as melt-in- the-mouth kababs, roasted, barbecued, or in curries. Even though India has a whole series of cow-protection movements, Hyderabad boasts of its delicious dishes of beef. Nevertheless, as a whole, other than lamb and chicken, Mughal food is mostly vegetarian, containing lentils, peas, and beans, heavily spiced.

From the centuries of Mughal food evolvement, Hyderabad, in our times, is famous for the distinctive aroma and taste f its Biryani, a dish of rice and mutton or chicken. Travellers have written that in the past a typical Hyderabadi feast would have no less than 26 different varieties of Biryani a dish which has the reputation of being an aphrodisiac.

Perhaps, equal to this rice dish, for Hyderabadis, is Haleem, a much sought after dish during the holy month of Ramadan. A succulent dish of meat, wheat, ghee, cooked to a porridge-like consistency, its name Haleem literally means patience, because it takes long hours to prepare.

From the hundreds of other Hyderabadi delicacies are: kulcha, with a legend that adds romance to its flavor, Baghare Baigan, a tasty eggplant dish; and sherwanis, Pattar ka Gosh, Korma, Pakodas, and Salans, all with special enticing aroma and mouthwatering flavors. Other favorites are Vadas, delicious doughnuts dunked in steaming hot sambar, deep-fried rice flour Murku, and steamed rice dumplings, called Idli.

As a fitting end to the meal, one can savor Payasam, a pudding made with rice and milk, Kubani ke Meetha, an apricot dessert served with whipped cream, almond flavored Badam Kajali, Sheer Khurma- a delicacy of dry fruits and dates, an exotic range of Halwas and the elaborately prepared paan.

Hyderabad's dedication to fine dining has been unwavering for many centuries, especially among the upper classes. Throughout the centuries, the Nizams of Hyderabad were famed for their sumptuous feasts and their love for fine dining. One of these rulers, Nizam Mir Osman Ali, called the >patron saint of Hyderabadi cuisine=, even created his own dishes - still cooked today.

Under the patronage of the Nizams, the cooks of Hyderabad devoted themselves to sharpening their culinary talents with the subtle blending of spices and emphasizing the fiery chilli. In the process, they created an amazing range of superb dishes. Much to the delight of food lovers, today, one can enjoy succulent historic Hyderabadi creations thanks to these clever chefs.

In these samples of Hyderabad recipes, I have simplified the recipes and substituted some of the hard to find ingrediets on many North American and European shelves. However, I have tried to retain the same taste for all the recipes.