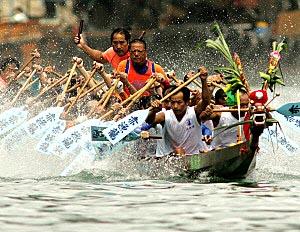 Hong Kong Dragon Boat races at Aberdeen harbour on the south side of Hong Kong island. 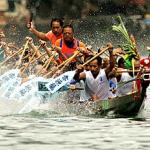 Scores of teams will battle each other on the seas and lakes of the former British colony on Saturday to mark the annual Tuen Ng Festival, one of the biggest holidays in the Chinese calendar.

The ancient pastime of dragonboat racing goes back to the third century BC, and is an annual memorial to the suicide by drowning of China's father of poetry, Qu Yuan.

Qu took his own life after a spat with a local resident in the modern-day Yangtse valley by throwing himself into the Mi-Lo River.

Villagers and fishermen rowed out in an unsuccessful attempt to save the drowning poet. To stop fish eating his corpse, an act that would have prevented him going to heaven, they threw rice dumplings into the water to satiate the creatures.

Since then, the scramble for Qu's body has been celebrated in the races. The throwing of the dumplings is marked by the eating of "zong zi", glutinous rice and minced pork wrapped in bamboo leaves.

Hong Kong's marine-based economy lent itself to huge celebrations of the festival and it soon became the spiritual basis of the Tuen Ng holiday.

Dragonboating grew to become an international sport with an estimated 50 million participants worldwide.

Ritual preparations for the event begin days before the races with the blessing of the boats by Taoist priests.

According to a tradition that dates back more than 2,000 years, the vessels must be given "life" in a ceremony that invites the spirits to enter them.

Before racing begins, the boat must be rowed out to sea in a direction perpendicular to the temple that blessed it.

According to the Stanley Dragon Boating Association, which oversees the races, "this ritual serves to ward off evil and to sanctify and bless the boats".

In addition, it is supposed to make the dragon boats strong and fierce and therefore fit to compete in the exciting races. The boats' dragon figureheads at the bow, and tail at the stern, must be blessed separately.

On race day, the dragon's eyes are dotted, which means a local dignitary paints the dragon's pupils into its eyes. After competition they are then placed in a temple to "rest" and allow the spirts home.

There are two types of dragon boat. The smaller Hong Kong boats are the international standard, while the longer Taiwanese boats are less popular.

Teams consist of 22 paddlers, a steerer who guides from the stern and the cox who beats time on a huge drum at the bow. Race courses are 270 metres (891 feet) long.

Dragon boat racing is now a summer-long sport with competition between leagues. The Tuen Ng Festival is the showpiece event of the competition.