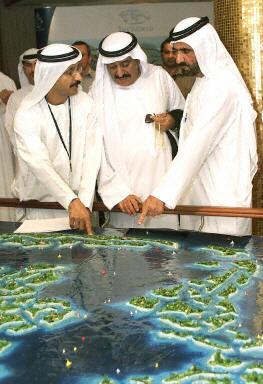 Crown Prince Sheikh Mohammed bin Rashed al-Maktum (R) looks at a display showing the Atlantis man-made island project during a launching ceremony of the luxurious 2,000-room resort and water theme park off the coast of Dubai, 21 September 2003 at a hotel in the Gulf emirate. The 650-million dollar first phase of the Atlantis' project, which is inspired by Kerzner International's Paradise Island in the Bahamas, adds to a boom in tourist infrastructure investment in Dubai, including the construction of dozens more five-star hotels. The project is a joint venture between Kerzner and Dubai's property developer Nakheel LLC. 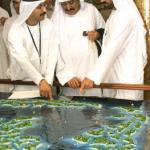 There are only so many islands in the world but the dream of owning one, for the super rich anyway, is becoming very much a reality -- in Dubai.

A cluster of 300 islands, shaped like a world map, is gradually surfacing on Gulf waters, making the dream of procuring a private water retreat within an ultra-luxurious setting very real indeed.

In this affluent emirate, construction is being taken to such extremes that there are no boundaries set by any lack of suitable real estate.

So, you can buy the island paradise of Iran, France, Texas, Lebanon, Sudan, Hong Kong, Saudi Arabia, New Delhi, New York or even Iraq, provided you're one of the world's wealthiest and accredited to own them.

Israel and Palestine won't exist. But neither will various other countries for merely design and practicality purposes, according to Wahid Attalla, Executive Director for Commercial and Operations at Nakheel, the property developer that has embarked on this most immoderate project.

About 10 percent of "The World" has been sold, Attalla told AFP, while around 12 islands are already above water, marking the beginnings of yet another extravagant Dubai landmark.

All of Australia, comprising 14 separate islands, has been snapped up by a Kuwaiti consortium planning a multi-purpose development. All that can be revealed of the other buyers is that they involve "some impressive names", among them celebrities.

"I think it's the most exclusive development in the world," said Attalla. "You're talking about buying an island for millions. You will need to spend twice as much to develop it.

"So it's a mega investment. That's part of the exclusivity, over and above, of course, that the project is unique.

"With the level of investment, we have been requested by the investors to give them the opportunity that when they are ready with their designs and everything, they will make the announcement."

The three-billion-dollar development, forecast for completion at the end of 2007, will be located four kilometres (2.5 miles) off Dubai's shores halfway between the landmark Burj Al-Arab hotel and Port Rashid. Access will be by sea or air.

The project is along the coast from the world's largest two man-made islands in the shape of palm trees, The Palm Jumeirah and The Palm Jebel Ali, rapidly taking shape and also developed by Nakheel.

The grandiose developments are only some of a raft of pioneering schemes launched by Dubai, one of seven city states that make up the UAE federation.

Though buyers of property on both palm islands have to meet certain criteria, they are not under the strict guidelines for owning part of The World.

"We don't just sell to anyone who has the money, you have to pre-qualify," said Attalla. So unless purchasing an island for private use, prospective investors have to submit a company profile, bank references and a track record of hospitality or tourism developments undertaken.

Nakheel, which three and a half years ago didn't even exist, is targeting "the big investors, sea lovers and yacht owners," and heavily promoting its developments and Dubai in general at international shows attended by the like.

Given the extent of investment opportunity in Dubai and its booming real estate market, Attalla sees the islands being used more for commercial projects than private homes.

And "with the exception of one or two cases where buyers have an attachment to a certain country, some of the rest are planning to change the (island) name once it's developed," he said.

Affluent Dubai, which has launched a bid to establish itself as the Gulf's business and leisure hub, has ambitious plans to attract 15 million visitors by 2010 and 40 million by 2015.