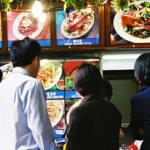 I'm sure you would have heard a million times about the twin evils of Singapore - eating and shopping. The local retail industry is facing a slump right now, but no matter how bad the economy is doing, we will still need to eat, right? And as long as the shop continues to serve steaming cooked foods or ice-cold desserts, the crowd will keep flocking in. In fact, I think eating is psychologically comforting to most of us.

Not that we need to fret about what to eat. Putting international cuisines aside, the by-product of our multi-racial culture is the blossoming of foods from Chinese, Malays, Indians and Peranakans (a local cultural hybrid influenced by both Malay and Chinese traditions), amongst others. The following are but a few of the local dishes that Singaporeans are immensely proud of.

Most can be found under one roof in big "coffee shops". Coffee shops are a different concept here. They are eateries occupied by numerous stalls serving breakfasts, lunches and dinners, and are therefore not your Starbucks and Spinelli's joints. Locals call them "ko-pi-tiam" (pronounced co-pee-tee-alm). Read on, and you will not be hungry for breakfasts, main meals, drinks or desserts in your stay here.

A tip: if you are not eating in "touristy" areas, try to play up the part of the wide-eye foreigner. Although you may stand a risk of being ripped off, there is a higher probability that you will be treated like a distinguished guest. Though you may get curious stares as people wonder how in the world you manage to find your way to that remote eatery, Singapore's hospitality usually translates to bigger helpings. Imagine the boss boasting to his neighbours that his customers included blond-haired ladies from Sweden or darker folks from South Africa! You will be a subject of conversations for many moons to come.

What it is: Enjoy Singapore's favourite breakfast in coffee shops all over the island. Slices of bread are toasted to golden brown, and the magic lies in the spreads over the hot bread. Ask for "kaya" (pronounced car-yah) and "cold-storage butter". Kaya is a sweet paste made from coconut, and it tastes heavenly with melted "cold-storage butter". You will have struck the jackpot if you managed to locate a shop that continues to toast its bread over charcoal stoves, as this is a rapidly disappearing old method.

A tip: This breakfast fills best when washed down with coffee or tea. Amuse the counter staff by asking for "coffee-gow", which means very thick coffee.

What it is: Quite simply, this is a dish of fleshy duck meat and rice. Pick among the different methods of preparing the choice fowl. You can crunch on roasted duck with delicious and crispy dark-red skin. Or, you can bite into succulent small cuts patiently simmered in a broth of soya sauce and herbs. Always ask for yam rice instead of plain white rice - boiled with generous chunks of yam, cabbage and soya sauce, it is good enough to be eaten on its on! A tip: A perfect accompaniment would be fully boiled eggs simmered in, yes, soya sauce again! It is mildly fragrant as the natural sweetness of soya sauce seeps into every bite.

What it is: A heap of ice packed tightly like an ice mountain. Fillings like jelly cubes, red beans and corn kernels lie at the bottom of the heap. Thick syrup is poured evenly on the ice, giving the Ice Kachang a colourful coat of red, green, yellow and brown. The best part is the condensed milk - ask for lots of it to give a kind of vanilla flavour to the ice. This is a great solution for the formidable Singapore sun.

What it is: Meats like mutton, beef and chicken poked through short wooden skewers are patiently grilled over burning charcoal. Dip into the satay sauce comprising chilli and peanuts for additional "oomph". Accompaniments include thin slices of cucumber and onion, and special rice cubes called kutuput (pronounced koo-too-putt). They are great as appetizers, or for calming your taste buds after the strong fragrance of satay.

A tip: This dish originated from the Malay culture. If you are buying satay from a Malay stall, never ask for pork because pigs are considered unclean in the Muslim faith and consumption is disallowed.

What it is: A thick tea sweetened with condensed milk. Sounds ordinary, but a friend from New York was so hooked to this unique kind of tea that he found his way to the coffee shops nightly to satisfy his cravings.

A tip: This drink is not available in your Starbucks or other "westernised" joints. You'll have to find your way to a local "coffee shop" for a Tea-C.

What it is: Arguably Singapore's favourite noodles. There are various kinds of noodles for picking - the flat ones (mee-pok), the thin ones (mee-gia), or the fat, yellow ones. The dish can be prepared dried, or you can have the noodles soaked in a tasty broth (usually with lots of MSG). Fishballs, pieces of pork, mushrooms and plenty of beansprouts are the usual accompaniments. The highlight of the dish is the chilli, as die-hard fans adore the specially made chilli sauce. Warn the hawker beforehand if your tongue cannot take fiery treatments.

What it is: "Char" literally means "fried", while "kway tiao" is a special kind of flat noodles made from white flour. The kway tiao is fried in generous amounts of oil, with traditional cooks continuing their usage of lard despite the availability of healthier oils. The kway tiao is coated with dark soya sauce to make a sweet and fragrant dish. Ask for clams (best eaten half-cooked), fish cakes and Chinese sausages as the essential accompaniments.

A tip: Do remember that consumption of partially cooked seafood like clams place you under the risk of ailments like Hepatitis.

What it is: The most famous Indian pancakes in Singapore, and especially popular as breakfasts and suppers. The preparation of these traditional pastries is as exciting to watch as the dish is delicious. Witness how the experts pour an even layer of thick mixture onto a huge hotplate. Then he commences to use his hand to continuously flip the ever-widening dough, until he looks like an acrobat tossing round towels in the air. When served, tear the piping hot Roti Prata into manageable pieces and dip them into specially prepared curry. Kids and the less adventurous can sprinkle sugar on the pancakes instead, which tastes surprisingly good too.

A is for Asia, A is for adventure

In the mood for moon