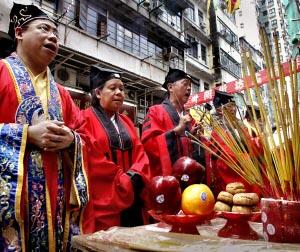 People chant during a ceremony of the Hungry Ghost festival in Hong Kong. 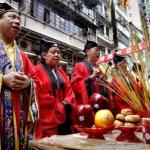 The Hungry Ghost festival is celebrated in China, Taiwan, Hong Kong, Malaysia and Singapore. Chinese who maintain traditional beliefs hold that ghosts are allowed out from heaven for the lunar month to roam the earth, and the living are required to satisfy the ghosts in order to attract good fortune.

HONG KONG, Aug 17, 2005 - Lau Yan-on puts the finishing touches to an elaborate paper and bamboo model of a house, complete with windows and doors, an outdoor swimming pool and a water fountain.

His workshop in the busy working-class Kowloon district of Hong Kong is brimming with similarly intricate models of sports cars, luxury goods like plasma TVs and mundane everyday items including computers and mobile phones.

By Friday, however, all these works of art will be gone.

Although crafted often by hand and worth up to 1,300 US dollars, they will be burnt to a cinder in ritual pyres that have been a part of Chinese culture for almost 2,000 years.

Lau, 50, has made a career of crafting models that believers in Chinese Taoist-Buddhist teachings burn as offerings to ward off evil "ghosts".

According to Chinese custom, incinerating facsimiles of luxuries will pass the real things to spirits in the afterlife and distract them from causing havoc during Yue Laan -- a month-long period when the gates of hell are said to be opened and the spirits freed to stalk the Earth.

Yue Laan occurs during the seventh month of the Chinese Lunar calendar and is known as the Hungry Ghosts Festival. This year its feast days fall on Thursday and Friday.

Lau compares the practice to mailing gifts to the afterlife.

"We Chinese people think, everyone works for a lifetime so that they can buy a house," he told AFP. "Even though we can't afford one during our lifetime, people will 'post' one to their ancestors. They might also send them a pair of servants to care for them," Lau said.

According to believers, the evil spirits are the ghosts of people who died with no descendants.

Only the dead that are prayed for by surviving family go to heaven, and so by offering gifts to evil spirits it is also believed they can be released from purgatory.

The festival is celebrated primarily in Hong Kong, Malaysia and Singapore but celebrants can also be found wherever there is a sizeable Chinese community.

China's communist government all but banned observance during the Cultural Revolution of the late 1960s. As a result, Yue Laan is hardly marked in mainland China.

The origins of the festival can be traced back to the introduction of Buddhism to China in the first century.

The faith clashed with the beliefs of the Chinese, who predominantly followed the teachings of the sixth-century BC philosopher Confucius.

However, the Buddhists adapted their practices to include the Confucian custom of ancestor worship. This proved to be more acceptable to the Chinese.

Different stories exist to explain the origins of Yue Laan, but one of the most popular centres on Mu-lien, a Buddhist monk blessed with "divine sight" who saw his mother suffering as a diseased hungry ghost in hell.

He tried to feed his mother but was unable to because the food crumbled into charcoal.

Buddha instructed Mu-lien to offer his fellow monks gifts of a variety of foods and delicacies on behalf of his mother and his ancestors.

By the monks' acceptance of these offerings Mu-lien's mother and ancestors were released from hell and ascended to heaven, according to the story.

Even today, food is still offered and at this time of the year it is common to see the burnt remains of fruit, sweets or meat in small communal shrines found in older apartment blocks.

Wealthy observers like to give offerings in keeping with their status. Model-maker Lau was asked, for instance, to create an entire pop band, including instruments and stage, for relatives of Hong Kong singer Anita Mui, who died of cervical cancer in 2003.

"I was asked to make a whole band for her with several singers, microphones and all the musical instruments. It took me a week to make," Lau said.

Observers have asked Lau to make refrigerators, radios and washing machines -- anything that can make the life of a ghost more bearable.

The most popular requests are for mobile phones, plasma televisions and personal computers.

Most of the small items are machine-made and shipped from factories in Dongguan city in southern China. But big items like houses, cars and servants are made by hand in Hong Kong.

Many superstitions surround the festival, especially the idea that people should not wander alone late at night during this month, for fear of being possessed. They are warned away from swimming in case ghosts trying to drown them.

As a result, roadside traditional Chinese operas are often held to entertain and distract the spirits from their pursuit of havoc.

In more superstitious times, seats at these operas remained empty as they were believed to be occupied by ghostly guests. Today, believers are increasingly ready to fill them, after politely inquiring whether the seats are taken.