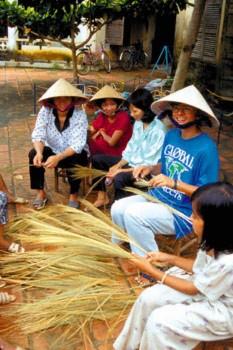 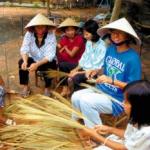 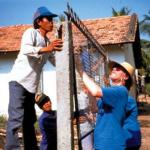 Linda Schlapp's idea of a holiday used to be a trip to Europe and a couple of weeks at a nice hotel. "I did the standard tourist thing," says the thirty-six-year old New Yorker. At least she did until she found Global Volunteers. Now her idea of a great vacation is working in a remote village in Vietnam or Indonesia or China where the conditions are Spartan at best and the closest luxury hotel may be in another country.

Global Volunteers is a non-profit organization based in St. Paul, Minnesota that sends teams of American volunteers to work in developing countries throughout the world. Volunteers can pick from destinations as far away as Russia, Poland and Ukraine or as close as the Mississippi Delta, the Ozark Mountains and the Rio Grand Valley. The trips last either one, two or three weeks, cost anywhere from $300 to $2,000 plus airfare and are tax-deductible. The organization, founded in 1984, now sends out some ninety teams a year with each team made up of about ten members. The groups are known for being sensitive to the needs of the communities they enter. Volunteers work hand-in-hand with members of the community on projects chosen by the local people such as building schools, planting community gardens and painting street signs. Depending on an individual volunteer's background, they may help in public health clinics or teach courses in free-enterprise.

The people who sign up for Global Volunteers have had enough of beach combing, sun-worshipping and fruity drinks. They are ready to trade in their golf clubs and tennis rackets (at least temporarily) for paint brushes and more primitive surroundings. Participants range from college students to octogenarians. While there are no special qualifications or requirements, they share a sense of adventure and a desire to experience and learn from other cultures.

Schlapp took her first trip with Global Volunteers in March 1995. She was looking to do some volunteer work abroad and decided on the program in Vietnam "because of our history there." She feels the experience changed her life. "Seeing how happy the people in Vietnam are when they have very little in the way of material wealth and then walking in the streets of New York and seeing people in suits and ties with their faces all tense and stressed-out made me re-evaluate what success really means and what happiness is." Since then she has become a self-confessed "Global groupie" and is now about to embark on her fifth trip while preparing to become a team leader. "You really get to meet the people. There's a definite cultural exchange. You're having a great time and you're helping people. The people really appreciate it and the volunteers really appreciate it."

Global Volunteers has been sending teams to Vietnam since 1994. The volunteers work in the town of Tan Hiep in Tien Giang Province, about two hours from Saigon. The people of Tien Giang have asked for help repairing an elementary school, establishing wells for a clean water supply, cleaning up a polluted stream and teaching English.

Jan Eder has spent most of his holidays in Petoskey, Michigan but has always had an interest in Asia and says that "as an American, I especially felt some type of emotional bond with the people and country of Vietnam." For him, Global Volunteers was the right way for him to experience the country because "you get to see the country as no other tourist could." Eder, a forty-three-year-old attorney from Wisconsin, still stays in contact with the Vietnamese friends he made and is even considering moving to Vietnam.

Warren Williams had already been to Vietnam, as a U.S. Army Colonel in 1964 and then again in 1968-69. When he retired, Williams wanted to do some volunteer work and also wanted to go back to Vietnam: Global Volunteers was the perfect solution. His 1995 trip with Global Volunteers was his first back to Vietnam since the war and he says "going back was a real pleasure." He especially liked the fact that Global Volunteers allows people to have close contact with the local people whom he found particularly warm and hospitable. Williams is currently planning more trips with Global volunteers, including a stint in Vietnam in July. Kate Pickup, a twenty-one-year-old senior at Princeton University, also had very personal reasons for going to Vietnam. Pickup was born in Saigon and had not been back since an American family adopted her in 1974. She describes the trip with Global Volunteers as "awesome" and plans to return to Vietnam after she graduates.

A trip with Global Volunteers can be an exciting alternative to a conventional vacation. It offers people the chance to gain first-hand understanding of other cultures and how they live and work. According to Linda Schlapp there is only one bad thing about the program: "You're constantly having to say goodbye."

Shopping for Silk in Hanoi

The Story of Nom