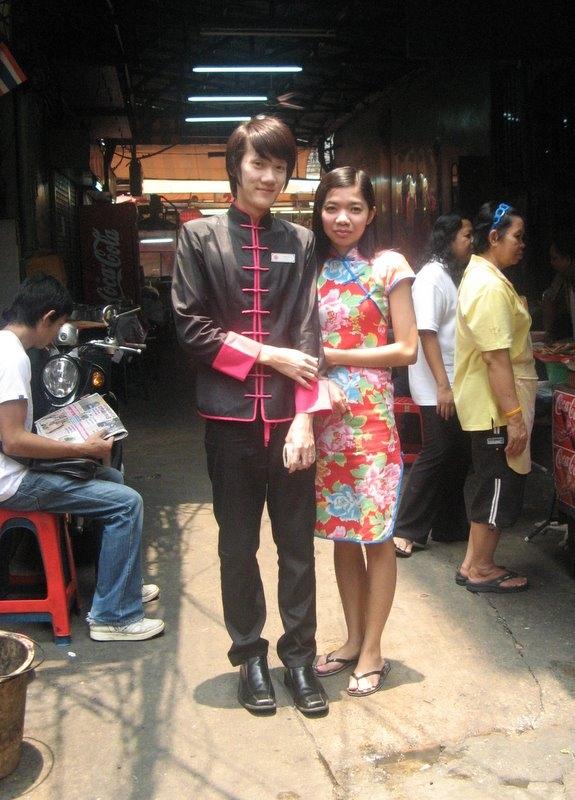 A couple in Chinatown, dressed in the height of fashion 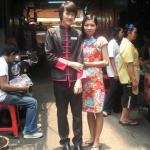 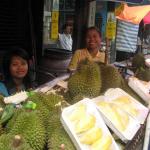 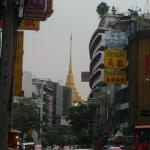 Even in Southeast Asia's most famous city of inequity the Middle Kingdom's pull on me is inescapable.  I'd come to Bangkok for three days of meetings, luncheons and dinners with a group comprised of Asia-based travel writers, photographers, artists and various other nomads. The get-togethers were good, but by the second day I was burnt out on the tourist and skin trade vibe of Sukhimvit and Nana Plaza, where all the events I'd come for were taking place. So on the morning of the third day, with nothing scheduled but high tea at the fantastic Mandarin Oriental for late afternoon, I decided to escape the sleaze and tourism and head to Chinatown.

Strange irony indeed that the first thing I saw upon stepping out of the taxi in Chinatown was a brothel named after my adopted-by-marriage Lone Star State. Unable to resist being able to tell people about a the existence of a place in Bangkok called Texas Massage, I walked down the alley towards an unlit neon sign.

The heavily made-up duo lounging by the entrance confirmed what I already suspected. Inside the darkened parlor, the business at hand was clear as day; a lobby sitting area contained a few couches facing a ceiling-to-floor window that stretching from wall to wall.  On the other side of this window a long and narrow room was set up with two tiers of felt-covered benches, long enough for twenty or so prostitutes to lounge away the hours until being called for duty.

Absent, however, were the prostitutes themselves.  An older woman – the madame, I presumed - sat behind the front counter smoking a cigarette.  She shrugged, and, pointing to the clock and the wall, held up two fingers. Heartened to learn that in this little corner of Bangkok at least the world's oldest profession sleeps in, I headed out to explore the rest of the neighborhood. The hookers by the door smiled and waved me over, but theirs wasn't the sort of exploration I was after.   “Forget it,” I said to them as I passed. “It's Chinatown.”

One of the oldest areas of in Bangkok, Chinatown dates its history back to the late eighteenth century. Back in those days, the country was known to outsiders as Siam, and the neighborhood was home to thousands of Chinese merchant families. Many of the Chinese who now live in the area are descended from these merchants, or are part of a later historical Diaspora. Though some can speak some dialect of Chinese (Cantonese, Mandarin, and even Chaozhou can all be heard,) most folks who live here consider themselves Thai.

After winding through a few alleys featuring small stalls selling cooked food, I found myself on Bangkok Chinatown's main artery.  At night Yaowarat road is famous as a food street, but during the day shops selling gold (as well as other goods, wholesale and retail) are the main business of the long avenue.  I stepped into a brightly lit apothecary that seemed Chinese inside and out.  When I asked the young lady sorting through herbal remedies behind the counter if she had anything that might forestall the cold I was coming down with, she just looked at me quizzically.  Fooled by the decor, I'd spoken Mandarin, which the young lady clearly didn't.  She quickly called over a colleague, and after a brief conversation in our mutual second language,  I was soon holding my nose and gulping down a warm glass of the foulest liquid I'd tasted in years.

One part of me invigorated and another embittered, I left the shop and went looking for something to wash the medicine's aftertaste from my mouth. Though most of the street's famous nighttime food stalls had yet to open, I found a wooden stand selling whole pineapple, durian, jackfruit and other delicious, unwieldy tropical fruits. The saleslady sold me some cut pineapple, which I chomped down greedily while making my way over to the enigmatically named thieves market. Offering wares ranging from clothing to bolts of cloth to bulk nuts and candy, the covered street market seemed to have earned it's sobriquet in more colorful times, and was neither larcenous nor particularly exciting.

I left the thieves market and headed north through the alleys until I came upon an odd avenue, one I'd previously not known existed. There, on the outskirts of Chinatown, I came across row after row of stores whose stock in trade was firearms. Impressive indeed were the dizzying array of handguns, rifles and automatic weaponry on display in the windows of the dozen-plus mom and pop gun shops lining the street.  For a moment I thought I might be back in Texas, until I walked into one to take a picture and the owner told me with a smile "sorry, I only sell to Thais."  With the idea that second amendment rights might have somehow traveled with me out of America forever quashed, I hailed a taxi.

As I rode from gritty Chinatown into the posh neighborhood surrounding the Mandarin Oriental,  I found myself meditating on the idea that both the beginning and ending points of my tour might have been somehow appropriate to the story at hand.  There are "Chinatowns" all over the world, ranging in tone and tenor from glorified theme parks with cartoonish Asian overtones to utilitarian neighborhoods, organically formed and clearly serving purposes other than tourism.  Though there's plenty of culture around for those who know where to look, nobody would mistake this neighborhood for a Sino-flavored Disneyland. Offering sex on tap and guns for sale, Bangkok Chinatown clearly fits squarely in the utilitarian column.

Bangkok Chinatown is due east from Hua Lamphong, the city's central train station. Among the busses passing through Chinatown are numbers 1, 7, 8, 37, 49 & 53. If you choose to go by boat, Tha Ratchawong pier is on the southern border of Chinatown.  For now, the nearest MRT station is Hua Lamphong on the blue line, though another line going directly to Yaowarat Road is in the works.