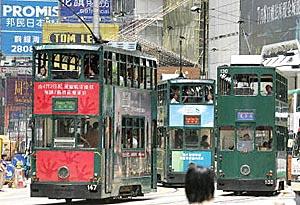 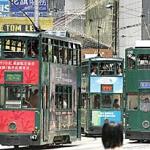 Amid the frenetic pace and futuristic architecture of Hong Kong's financial district, the trams seem slightly out of place as they gently weave their way through the streets. But 100 years after they first entered service, the clattering double-deckers remain one of best-loved modes of transportation in a city not always known for preserving its history. Together with the Star Ferry and the Peak Tram, the trams are one of the most endearing icons of Hong Kong's heritage, and many events are lined up to mark their centenary.

In terms of speed, efficiency and routes, the trams by no means match up to the sophistication of Hong Kong's buses or subway system. There are only six routes, serving the north of Hong Kong Island and covering a distance of 30 kilometers (18 miles). No doubt its economical fares -- only two HK dollars (25 US cents) -- have helped to continue attracting passengers, but there are other more sentimental reasons which have kept it going.

Frankie Yick, director of the Hong Kong Tramways, which operates the trams, defends the misconception that they are slow, arguing that "statistics show that buses and cars usually only travel at about 10 to 12 kilometers per hour in the busy districts, but trams travel up to 40 kilometers per hour because they use a fixed route." The routes take passengers along one of the most historically rich areas of the city, making trams a joy to ride for both locals and tourists alike, Yick said.

"Trams are part of the routine for people who take them every day as they become so familiar with its route... it is a pleasure to travel on trams. Some like the fact that they are not air-conditioned and they can feel the breeze on the top deck, while others simply like to take in the views," Yick said. "Passengers almost develop feelings for them, there is something sentimental and nostalgic about them," he added.

Hong Kong Tramways began in 1904 as a fleet of 26 single-decked tramcars. In old colonial Hong Kong, the trams were divided into first class or third class. Class distinction was not abolished until 1972. The familiar double-deckered trams were first introduced in 1912. Today the fleet boasts 163 trams, and is the world's largest fleet of double-deckered tramcars still in operation. It serves a hefty 240,000 passengers on average every day. As testament to their resilience, the trams survived the opening of the underground trains in Hong Kong in 1980, which many thought would render them redundant.

Despite an initial drop in passengers, numbers quickly rose again after people discovered that the underground trains were not always quicker or more convenient than their older, hop-on hop-off counterparts. The transport also pulled through the Severe Acute Respiratory Syndrome (SARS) crisis of 2003, which saw business fall by as much as 20 percent amid a widespread fear of crowded spaces in which the disease might spread.

Yick does not see the trams' popularity waning any time soon. "I only see trams becoming more popular. In the 1970s and 1980s, many countries abandoned the street trams for cars and buses. Today, as the world is increasingly environmentally aware, they are making a comeback," said Yick. "Manchester (in England) and some cities in Japan have just installed new tramway systems. The environmentally friendliness of trams will only allow them more room for survival," Yick added.