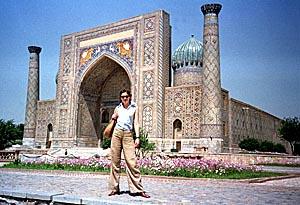 A tourist poses in front of Ragestan palace, in the ancient Uzbek city of Samarkand. This large city of Islamic art was founded in V century B.C. 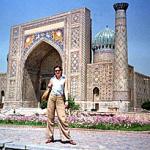 In Samarkand's ancient central square, Uzbek craftsmen sit in front of their shops under a blazing sun waiting for visitors who never come. Hotels open their huge dining halls to a handful of passers-by. A dramatic slump in tourism has hit hard at the legendary capital of Tamerlane's empire, built in the fifth century B.C. and considered one of the jewels of Islamic art.

For centuries the city lay in splended isolation at the periphery of explored world, and in this respect at least little has changed. Soviet tourism is a thing of the past, and the flow of European and Japanese tourists that was gradually replacing it was brutally cut off by September 11 and the wars in Afghanistan and Iraq.

Last year only 30,000 tourists visited Samarkand, just half the figure for 2000 and 2001, local officials said. During the 1980s, according to tourist professionals, the city enjoyed as many as 200,000 tourists per year. "We no longer get visitors from the former Soviet Union, and Westerners are put off by the presence of Afghanistan over the border," Saad Al-Haire, who heads a travel agency, noted bitterly.

Russians and Ukrainians looking for exotic destinations now prefer the more commercially oriented tourist markets of Turkey or Egypt. "The kind of people who would appreciate Uzbekistan's cultural riches live below the poverty threshold. And people with money are the kind who regard former Soviet republics as something to forget," another travel chief, Murat Saidaminov said.

Specialists believe it will take a decade or more before Russians and residents of the other former Soviet republics resume an interest in the places they once thronged to. Tourism from other Muslim states, on the other hand, is not encouraged. Nationals from countries such as Saudi Arabia, Turkey, Pakistan or Iran suspected of offering financial support to Uzbek Islamists have found it increasingly difficult to obtain visas since a bomb attack in Tashkent in February 1999 left 16 people dead.

Local hopes for a revival lie with Western and Japanese tourists, and visitors to hotels will be hard put to find a brochure in Russian while the staff answer the telephone in English. Every effort has been made to entice foreign visitors to a city whose name echoes with historic resonances from Alexander to Genghis Khan.

Tour operators have devised new entertainments, bright new private hotels have opened and stand ready, traditional restaurants offer exotic dishes as Samarkand bids to marry Oriental hospitality with "European comfort". Hotels such as the Malika, Zarina and Furkat -- named after their owners -- in the historic city centre or the picturesque side-streets have radically upgraded their amenities, offering air-conditioning, Internet and round-the-clock room service.

Samarkand indeed has a lot to offer the jaded traveller. In addition to its religious sites, it has in the Ragestan what Britain's Lord Curzon once described as "the noblest public square in the world". As large as a football pitch, the square is bounded on three sides by mosques and religious schools, in a setting of soaring arches, towering minarets and turquoise domes.

Spring and autumn are the temperate seasons, with the additional attraction of the Nawroz (New Year) festivities in March. Among the attractions on the tourism programme are matches of buzgashi, a sort of anarchic polo employing a dead goat. Entirely landlocked, Uzbekistan is unlikely to attract popular tourism on anything like the scale of a country like Turkey, Al-Haire noted, "but the immense cultural riches mean that a tourist in Samarkand is never just a casual visitor".

Uzbekistan on the Web

Uzbekistan on the Web