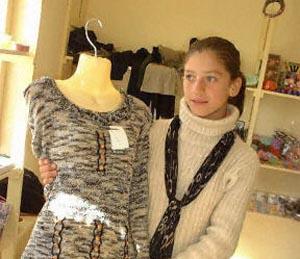 Salesgirl Salma Salat shows one of the outfits for sale at her shop in the Women's Bazaar or Bazaar-e-Zanana in Kabul. 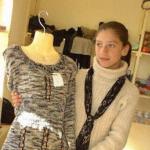 KABUL, Feb 17, 2004 - With their all-enveloping blue burqas thrown back from their faces, the three women shoppers laugh as they examine the sexy lingerie on sale at a west Kabul boutique, enjoying their first chance to buy such garments from a female sales assistant. Until two weeks ago, the only stores selling these items would have been run by men, leaving the women open to embarrassment and even rude comments while buying underwear, cosmetics or sanitary items. Inside the small store, one of 20 in the newly-opened Bazaar-e-Zanana or Women's Market, they have the luxury of chatting and laughing with the saleswoman as they weigh up the purchase of a mint green, made-in-China brassiere against a lacy beige one.

"We enjoy shopping here because it is relaxed. When we buy it's easier for us," says one of the women who asked not to be named. "When we buy bras and underwear for ourselves at the bazaar, we can only look at it from the outside but here we can even take measurements, we can look at ourselves in the mirror."

In conservative Afghanistan, the Women's Market has had a steady stream of customers coming to buy the dresses, shoes, underwear, jewellery, toiletries, children's clothes and foodstuffs on sale since it opened on February 1. Enclosed within a large, women-only public park which opened last spring, the shopping centre is a protected space away from bustling, male-dominated Kabul where women are rarely seen unless covered by head-to-toe burqas.

Until the market opened, women who were banned by their husbands from shopping or were too embarrassed to deal with male storekeepers, would have had to ask their spouses, brothers or sons to make purchases for them, says the director of the market Neelab Sadat. "They can buy here freely, without any problem," she says. "Women here can also shop for themselves and buy clothing and jewellery. In the bazaar it's a little bit difficult."

Under the repressive Taliban regime which ended in 2001, women were forced to wear the burqa and banned from schools and employment, their banishment from public life near total. The administration of President Hamid Karzai wants to change that, and bring women back into the public eye. "The women's market is important because women should be visible in every part of the society," and that includes being a shopkeeper as much as being a shopper, says Afghan Minister for Women's Affairs Habiba Surabi.

Inside the high walls of the Bazaar-e-Zanana, as the burqas are slipped back or taken off, women have the twin luxuries of window shopping and of having their fashionable clothes noticed.

On Fridays, the traditional Muslim day of rest, the garden and boutiques are an opportunity for Kabuli women to dress as they want. "They don't want men to come here," Sadat says. "On Friday, everybody was fashionable, everybody was wearing pants (trousers) not chadar (headscarf), they were wearing beautiful clothes."

In keeping with its desire to be as accessible as possible, prices at the women's market are cheaper than in the normal bazaars. A bra costs about 40 Afghani (less than one US dollar).

Men are strictly banned from the complex -- built with assistance from the French non-government organisation, Action and Development in Solidarity, International, and the Afghan Women's Affairs Ministry -- which also houses a hairdressing salon and small teahouse. In this strictly segregated country, where even the issue of women singing on television has created a furore, with officials declaring the broadcast of video clips featuring women singing "un-Islamic", the women-only garden and market provides a rare place outside the home where girls and women can feel comfortable. "Yes, the women are coming here but the bazaar is new," says shopkeeper Harzou Ghafouri.