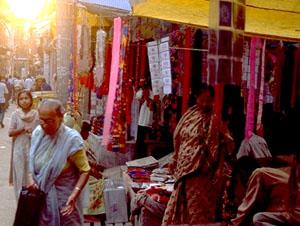 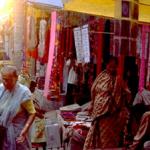 If this is to be a journey beyond preferences, I am sorry. For I would truly prefer to be elsewhere. I would prefer to be somewhere northwest of Simikot, trekking through the lush green river valley of the Karnali, than to be stuck here a second full day in the radiator heat of Nepalganj, the late morning already hot enough to melt polypropylene socks, to turn chocolate bars to liquid, to spoil my rolls of film like so many cups of warm milk. The Germans, who got close enough to Simikot to see the peaks of the surrounding mountains before turning back, order cases of beer amongst them; it's their third missed flight. For us, the wait is becoming equally surreal. Every day in Nepalganj is a day missed on the trek; I cannot reasonably delay my return to Kathmandu beyond the 5th of June, and even that seems like a dangerous push. So if by chance we do manage to get to Simikot tomorrow -- and there is never a clue in Nepalganj's tin silver sky -- we will have to give up a day at the sacred lake Manasarovar in order to stay with our plan to attend the Sagadawa festival.

Lunch may be momentous; Norbu and Ingeborge will arrive to discuss alternate plans. One decision I made yesterday, that I hope I have the willpower to stick with: I will not drive to Mt. Kailash. It is not the way I wish to approach the sacred mountain. If I have to come back here in the fall, for Yoga Journal and Albert Wen, I will -- but I don't want to go in by car.

Waiting for lunch, and reading the India Times dating notices in the Times of India. On page 19 there's a wonderful ad: a B&W photo of Albert Einstein with his usually riotous hair and mustache neatly trimmed to a stylish crew cut. Below, in small type, the pitch: "The Times of India Group of Newspapers are now available in the new international format. Slimmer. Slicker. Sexier. Relatively speaking, that is."

My relations with Inge and Norbu, uncomfortable since she announced the reason for this trek was their love affair, have come to a new turn. I joined them during lunch, hoping to discuss our potential changes in itinerary if we are unable to fly to Simikot tomorrow. But I was greeted with icy silence from Norbu, who would give me no information, and said almost nothing. His replies to my questions -- about rumors I'd heard that another airplane would be called for tomorrow's flight -- were confusing and perfunctory.

I didn't even bother to ask him about the report I'd heard from the Nepalese liaison officer, who told me that the Maoists are now asking a bounty of $100 per person, and demanding huge sums of money from the local staff as well... over 7,000 rupees from a recent group. I find it increasingly amazing that the Nepalese governemt is making absolutely no effort to protect trekkers in the Humla region; they know that many groups are being stopped and robbed of increasingly large amounts of money, and that the Maoists, in disarray and badly in need of cash, have been directed to make fund raising an absolute priority. One can't help but think of the Old West, or Medieval Europe, when bands of robbers, brigands and pirates harassed traders. The pioneers and traders did not just resign themselves to robbery; but that's exactly what we're expected to do. And though the Nepalese government is happy to take our money for the permits to trek into these beleaguered areas, they are willing to afford us not one whit of security. Maybe they believe that armed resistance would simply result in the deaths of more of their own; that the simplest thing is to allow the rebels to take money and leave it at that. But how does the equation change when innocent Nepalese laborers are being looted?

The (com)Promised Land Dispatch 5: Kingdoms of Sand and Stone