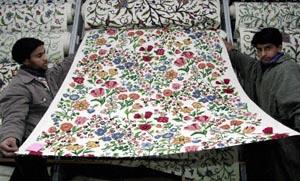 Indian Kashmiri salesmen unroll fabric adorned with traditional Kashmiri embroidery to show to a customer at a shop in Srinagar. 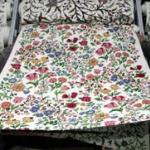 SRINAGAR, India, Feb 17, 2004 - Tourists hesitate to come to embattled Kashmir, but when Zafar Mir painstakingly needle-embroiders a pashima shawl, he knows it will still sell.

Mir has been working for decades on Kashmiri shawls, which have a worldwide market keeping exports flowing -- and even growing -- even as the scenic Himalayan province is ravaged by a 15-year insurgency against Indian rule. "Frankly speaking the unrest has had little impact on our trade. We continue to sell our products to leading shawl dealers," Mir said.

He voiced hope exports would touch 15 billion rupees (332.4 million dollars) within five years. "The sector contributes largely to foreign exchange earnings and has sustained the state's economy during the militancy," he said.

Kashmiri carpets, a variation of the Iranian craft, are renowned for being knotted by hand -- never tufted or made by machine. "A carpet is valued as per the knots it has. The more knots per square inch, the more value the carpet has," said Manzoor Wangnoo, a leading handicraft exporter with showrooms in the Kashmir summer capital Srinagar and New Delhi. He proudly displays a photograph of then US president Bill Clinton counting the knots of a Kashmiri carpet as he visited one of Wangnoo's stores in the Indian capital during a 2000 state visit.

Such handicraft shops in New Delhi, Bombay and in tourist hotspots across India mushroomed after 1989 when Kashmiris took up arms against Indian rule and tourism in the lush mountain province slowed to a trickle. The number of visitors has been rebounding since India and Pakistan, which also controls part of Kashmir, began a normalisation drive in April. Close to 184,000 tourists arrived in 2003, although it still pales against the 700,000-plus visitors in Kashmir in 1989.

But provincial authorities are still banking on exports to drive handicraft sales. In the next three months exhibitions of Kashmiri works will be held in Britain, Dubai and Germany. One item seeing increasing international sales is the namda, a floor covering made of pressed wool or cotton stitched with colourful embroidery, which is much less expensive than the traditional Kashmiri rug.

"We design namdas as per the order from the customer or dealer," said Abdul Kabir, 60, who has been embroidering namdas for 35 years. Kabir, though illiterate, stitches English lettering reading "Sweet Home" or "Welcome" on namdas, which can also be used as wall hangings.

Another lucrative line is embroidered shawls particularly those made of pashmina, which is spun from the hair of the bearded ibex goat which lives at 4,300 meters (14,000 feet) above sea-level in the Ladakh region.

Also drawing export orders is papier mache, made by soaking paper in water, shaping it over moulds and intricately painting the surface, usually highlighting motifs with gold colour.

Kashmir is the only part of India where walnut grows and the wood is used for everything from dining tables to ornamental carvings. As Kashmiri artisans look to tourists inside and exports outside, one source of sales remains constant: Indian troops battling the insurgency. "Whenever they go home on leave they buy handicrafts for their families," said Mohammed Yusuf, a shopkeeper.