A little taste of sunshine 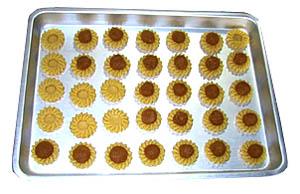 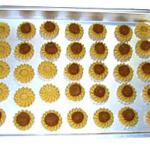 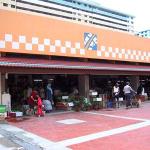 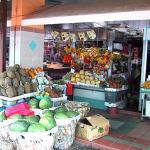 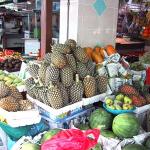 Ask any true-blooded Singaporean what comes to mind when he or she thinks of Chinese New Year, and chances are that, included in the list of festive favorites, right up there with the auspicious red/gold home decorations, red packets containing cash for good luck, lion dances, meter-high pussy willows in tall Chinese vases, raw fish salad, Mandarin songs over the radio and department store PA systems cheerfully announcing a fresh start in spring and the new lunar year, will be the mouth-watering selection of delicacies which are offered to guests at every home.

The advent of Chinese New Year used to be a time for housewives to try and outdo each other in coming up with the most delicious and the widest range of cookies to offer to family and friends dropping by to pay their respects during the first fortnight of the new lunar year. More pragmatic women settle on specialization, making large quantities of those cookies that they are best at, and swapping with relatives and friends, so that each ends up with a wide variety.

While a number of delicacies consumed during this festive season can also be found in other countries such as China, Taiwan and Hong Kong, there are a number of cookies that are found only in Singapore and Malaysia. These are unique to this area, and make use of ingredients that are readily available here, such as coconut, pandan (screwpine) leaves and pineapple.

Connoisseurs swear that the best pineapple tarts are those made by hand. Which explains why this cottage industry shows no signs of flagging year after year, even against the formidable resources of big factories that churn out these tarts with their gleaming machinery and automated production lines.

What makes a pineapple tart different? Let us join a Singaporean lady as she prepares a batch of pineapple tarts to be shared with family and friends.

She starts by visiting her neighborhood wet market, a common sight in Singapore's many housing estates. The wet market is the focal point of the neighborhood, usually a large open hall housing a number of stalls selling fresh produce. Walking down the fan-ventilated aisles of the hall whose floors are wet (hence the term "wet market") from stallholders rinsing coconuts or fish under running water, and the melting of ice chips piled high over the seafood to keep them fresh in the heat, she passes the many stalls selling fish, beef, chicken, pork, vegetables, flowers and spices, and heads straight for the stalls selling fruits.

Greeting her usual pineapple-supplier, she notes with pleasure that he has just received a fresh shipment, as the large rattan basket is piled high with about 50 pineapples freshly trucked from Malaysia that very morning.

Back home, she washes the whole pineapples, and removes any remaining "eyes" by making wedge cuts into the flesh of the fruit around the "eyes". Then she cuts each pineapple length-wise into 4 wedges and trims off the edge of each wedge which is the fibrous heart of the fruit that has little flavor. She tastes a small piece of the pineapple to find out how sweet it is. Some pineapples are sweeter, others more sour, and she needs to ascertain this in order to adjust the amount of sugar to add into the jam later.

In her mother's day, the pineapple had to be grated by hand using a coconut grater. Nowadays, she can just toss the pineapple wedges into her efficient German food processor that does the job quicker and just as well.

The grated pulp is then poured into a plastic colander to drain off most of the juice. She collects the juice into bottles and places them in the fridge for a refreshing drink on a hot afternoon.

The drained pineapple pulp is placed into a large pot over a medium flame. Enough of the juice remains for the pulp to bubble and boil, and gradually the pineapple pulp is softened by the boiling, and reduces in volume. Two sticks of cinnamon go into the pot, to add a rounded flavor. When the pineapple mixture starts to become dry, sugar is added in batches. As the sugar melts, the mixture turns liquid, and has to be constantly stirred to ensure the pineapple is mixed well with the sugar, and to avoid burning at the bottom of the pot. Some yellow rock sugar is added to add a thicker consistency. The sugar is added gradually, until the right level of sweetness is reached.

And all the while, the mixture has to be stirred. She takes care not to get hit by hot bits of the pulp splattering out of the pot, like larva from a little seething volcano, but has yet to chalk up one occasion of cooking the pineapple jam when she did not get hit. When she gets the first sting of hot pineapple pulp on her arms (or sometimes even her feet!), she steps out to snap a leaf from her aloe vera plant growing in a pot outside her apartment and smears the gel over the affected parts of skin, and knows that this will soothe the burn and prevent blisters from developing. The thickening mass is hot and heavy and she knows she will feel the ache in her arm muscles the next day from all that stirring. It is a case of literally toiling over a hot stove.

But for now, she breathes in the sweet smell of the pineapple cooking, and knows that her neighbors staying in the same block of flats will be getting the smell too. So will people walking by the block. And it will conjure in each person's mind their favorite pineapple tarts. She also knows the puzzlement that will cross some minds if they get that aroma at any other time of year than the Chinese New Year or Muslim New Year, for pineapple tarts are enjoyed just as much by the ethnic Malay community.

She uses a gas stove for this task, a compromise between the old method of boiling the pineapple over a charcoal stove, and the factories that use huge metal vats with attached stirrers powered by electricity, over multi-ring gas stoves. By the time the pineapple jam has reached the right consistency and golden hue, 3 - 4 hours have elapsed. Once the jam has cooled down sufficiently, she scoops the precious golden paste into containers and stores them in the fridge, ready for use whenever she decides to bake.

The making of pineapple tarts at home is a social activity. This is an opportunity to rope in (usually female) friends, colleagues, cousins and sisters to join in the fun. Many hands make light work of the many little tasks involved, removing the tedium of tackling this task alone, and the womenfolk maintain a continuous chatter as deft hands work, pretty much as their mothers had done before them, albeit chatting about different subject matter. Successful businesswomen, secretaries, teachers, administrators, students, housewives, they all enjoy this annual ritual of gathering with friends and relatives, to catch up with one another, gossip, or bitch about work problems.

They enjoy the simple pleasure of making something tasty with their own hands, never mind that the rationalists who insist on doing a cost calculation of the time spent on the tasks against the various women's salaries, will wonder why they don't just go out and buy a bottle of the tarts from a shop and save themselves the bother. And in their own way, they are defying the dying out of this skill, as it would not occur to many people nowadays to actually attempt to make pineapple tarts themselves. Pretty much as little children nowadays have never seen a chicken except those cling-wrapped in Styrofoam trays at the supermarket, many people have not tried their hands at making pineapple tarts. In the fast-paced life we live, there is the familiar refrain, "I just don't have the time."

Meanwhile, our bunch of ladies proceed with the task at hand. To prepare the pastry, the flour is sifted into a large bowl. Chilled blocks of butter are cut into small cubes and mixed into the flour with the aid of a pastry cutter, yielding a mixture resembling dry breadcrumbs. The butter has to be firm to yield this texture, as butter which has melted in the tropical heat will just bind with the flour in a sticky mass, and will not be light and crumbly after baking. A few egg yolks, one egg white, a dash of vanilla essence. And more kneading using only the finger-tips, so that the butter is not melted by the warmth of the palms, until a smooth dough is obtained.

Now the fun can begin.

One person rolls out the dough to the right thickness. Then she cuts the pastry with a metal mold that has a plastic or wooden insert which creates a depression in the middle of the shape. These molds used to be made of brass, and the inserts which create the depression for the pineapple filling, made of wood. These have given way over the years to stainless steel and plastic, which do not tarnish or grow mouldy in the tropical humidity.

These pieces of pastry are passed to someone else who shapes the piece of dough by hand if it is not of a nice, regular shape. Then, using a pair of brass or stainless steel clippers with serrated edges, she pinches the edge of the pastry, forming patterns which frame the depression in the center. Each piece of pastry is then placed in rows on a baking tray, ready for the next person.

In the meantime, someone else has been scooping teaspoons full of pineapple jam and forming them into little balls by rolling them between both palms. Perhaps therein lies a big difference between home-made pineapple tarts and those produced by factories. The homemade variety has been cooked to retain enough moisture so that the tangy pineapple taste comes through. The factory-made variety are often made with more sugar for a longer shelf-life, and drier so that they are easier to handle. These ladies take their time shaping the soft jam, which will dry out slightly during baking, to just the right level of moistness.

The little balls of pineapple jam are placed into the depressions at the center of each piece of pastry, and gently pressed down so that a nicely-shaped mound of pineapple gleams happily out, looking so much like the smiling face of a sunflower. After baking, the pineapple in the middle turns a bright sunshine-yellow.

When they are in a whimsical mood, the ladies roll out more bits of dough into thin strips, and form patterns and figures to decorate the top of the tart. One year, her niece decided to create smiley faces with two little dots for the eyes, and an upturned strip of dough to form a happy mouth. After the tarts were baked and arranged in layers in transparent plastic bottles, row upon row of smiley faces beamed out, bringing a smile to everyone who saw them. The young girl said that everyone who ate them would feel happy, and looking at the smiles that just the sight of them brought, it was easy to believe that.

The demand for pineapple tarts is at its peaks during the Chinese New Year and Hari Raya seasons, but never really disappears. Shops can be found that sell pineapple tarts all year round, but somehow the feeling of eating pineapple tarts at other times in the year is different. And the taste of tarts purchased at a shop can never beat the taste of that first tray of tarts that comes out hot from the oven, that first bite into tangy pineapple and melt-in-your-mouth fresh pastry, with the fragrance of baking still lingering in the air.

A Palace on Stilts