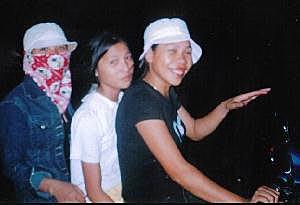 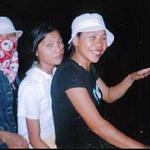 Cam Duc is a Catholic village a little north of Nha Trang and a little south of Cam Ranh on Highway One, the old Rue Sans Joie of the French war. I sojourned there for three weeks in August in 2003, not the worst time of year to visit the Central Coast. I had some misgivings because I remember the temperatures of up to 110 degrees in Sai Gon in 1968 but mostly it stayed in the 80s for me in Cam Duc.

There is a cafe a kilometer or so from the house I stayed in, an outdoor coffee bar where one can drink tea or French coffee and discuss whatever with old men in the morning and high school students in the evening and with the owner's family during the day. No food was served by Ong Ba Thuy or their daughters but vendors of coconut soup or fruits or rice delights would come in from time to time and it is all delicious at Cafe Ben Duong.

Trinh, the younger daughter of Ong Ba Thuy tends to the cafe in the summer between school terms. This year she had finished her formal academic schooling in the spring and meant to start at a school for training tour guides in the fall. I met her my first morning there when I went out walking to see the village. As I returned to the house she confronted me on the sidewalk and by gesture, invited me to come into her cafe which was directly across the street. I thanked her in my halting and rusty Vietnamese and she was thrilled. Not only was I the first American in the village since 1973 but I spoke some Vietnamese, too. Trinh really wants to be a tour guide and needs to learn English and here, right in front of her was an American to help. Alas, Trinh is not linguistically talented. Some of us were simply not meant to learn more than our native tongue.

In my first visits to the cafe Trinh and her sisters spoke warily and maintained a distance even as they tried to get close to the American. Finally Trinh asked me if I wanted a woman. I said no. I had come to Viet Nam on pilgrimage to La Vang for the Mass of the Assumption at the site of the Marian apparition in 1798, and was not looking for a woman. I wanted to learn about Viet Nam now and this people that had fascinated me back in the war. The atmosphere cleared then and the ladies did not worry about my intentions as I had ceased to worry about everyone trying to con me as the expatriates back home had assured me would happen. No one wanted my money. No one let me spend money for much of anything.

One morning as I sat in the miniature molded plastic chair sipping my coffee Trinh asked me if I had been to Bai Dai (say bye-eye)- Long Beach. I said that I had not yet seen the shore. She directed me to come back at three o'clock and we would go to the beach. At three I returned and Trinh was not there. Her older sister Hong was there on her Honda 70. Ong Thuy told me to go get on behind Hong. I felt a little dubious because watching the traffic on the streets in Viet Nam, in the city or in a small town, can be intimidating to a foreigner, but I got behind Hong and we went several kilometers north then off on a well travelled sand path that led through a vast area of great white sand dunes and great trucks and digging machines that were loading up the sand to take somewhere else. There were many motorbikes going the same way dodging the trucks whose drivers were yelling unkind things at us all.

The lane led to a rockpile that some of the riders could surmount on their bikes but most got off to push. As we reached it two tiny women were unsuccessfully trying to push their machine up the rocks. I got off ours and took the ladies' two wheeler from them and pushed it to the top and held it until they came up and remounted. One of them asked Trinh, "Who is he?"

It seems the Vietnamese do not stop to render aid except to family and I got an inkling of how the people feel about Americans that was to be reinforced before I left Viet Nam.

We came to a large covered area, a tin roof on poles where we left the Honda. The parking entrepreneur gave Hong a scrap of paper with a number on it. We walked to the beach proper and I was surprised to see brown sand, not white like the dunes behind the beach. There was another tin roof there on the beach with a large round table under it and a dozen men seated and several women and a couple of children. Hong led me over to introduce me to the group as the American her sister had found on the street.

There was a makeshift sheetmetal stove in the middle of the table and fish broiling upon it and there was 333 beer, and homebrew rice wine. At first all wanted to know did I really speak Vietnamese and why I was staying in a small highway village instead of in SaiGon or Da Lat. The conversation turned to politics and philosophy and no one looked over his shoulder, no one whispered or shushed. I asked How can you talk of such things and Thuan told me that a year ago such talk was not heard but it is changing.

A woman came to the table with her balance pans full of qua luu- pomegranates and sold a dozen of them to the folks at the table. I tried to pay for them but the lady refused my money and several of the other men handed her the cash.

There I was sitting at a table on the sand feeling pretty mellow fresh breeze blowing away the day's heat, drinking beer and rice wine among friends, eating pomegranates and fish, talking politics and philosophy with interesting and interested men and women, young and old. It doesn't get better than that.