Long-delayed metro all the rage in New Delhi 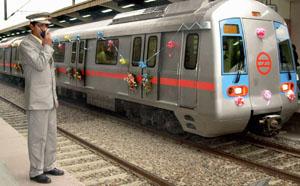 A uniformed platform attendant speaks on his walkie-talkie as a decorated train carrying guests and VIPs prepares to leave the Seelampur station of the Delhi Metro. 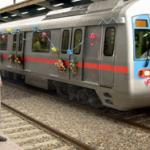 More than two weeks after it was launched, the New Delhi metro is by far the most popular attraction in the Indian capital. Residents of Delhi are dressing up for the occasion and taking their families to the metro, piling into the coach with a haste bordering on panic.

After a journey of ten minutes, the crowd flows out onto the platform, throws a last glance at the metro and moves towards the exit flanked by security forces.

"It's not really a joy ride," said K.L. Tandon, a retiree who had travelled 20 kilometres (12 miles) for his first journey on the system which opened on Christmas Day, 2002. Despite the crowds he said he liked the metro, particularly the small red handles hanging from the middle of the coach.

Fazila Begam and Naseem Ahmed, a traditionally dressed Muslim couple, were also doing the journey for pleasure. "It is really clean," said Ahmed. No dustbins have yet been provided at the stations but more than 300 people work day and night to clean the network, said J. Sanjay, assistant general manager of the company in charge of the metro. Usually Ahmed does not let his wife travel alone but may make an exception on the metro. "I think she would be safe here," he said.

More than 500 men are in charge of safety at the stations day and night, although they have only two sniffer dogs to detect explosives.

The metro closes at 10pm daily and access to the tracks are protected by large walls topped with barbed wires, "worthy of the Indo-Pakistan borders," according to railway expert Ranjit Mathur.

Mohammed Junaid, an embroiderer, is one of the rare travellers using the metro to get to work. "It takes me half an hour by bus and five minutes on the metro. It is slightly more expensive but it is more fun."

The New Delhi metro is the height of modernity in India today: roomy coaches with automatic doors, air conditioning, escalators and toilets for the handicapped. "Finally the metro gives us a little independence," said Anjlee Agarwal, coordinator of an organisation for handicapped people.

The metro operates with a mixed-sex team -- a first in Indian transport. Out of a team of 30 drivers, three are women, including 25-year-old Meenakshi Sharma. "My husband and my family are the ones who encouraged me even when others said it was a man's job," she says. "I am very tired at night and I feel like my bed is moving, like in the metro, but it doesn't matter, it's fantastic."

The first section of the metro extends 8.3 kilometres (5.1 miles) between the Shahdara and Tis Hazari districts. Other sections are due to be opened later this year and in the future. The current section is elevated, overhanging the city about ten metres (33 feet) above the daily chaos of auto rickshaws, cars, buses and cows.

Those in charge of the project said nothing could prevent the metro working properly. "The risk of earthquakes were taken into account in the design of the elevated parts of the metro," said Sanjay. "Engineers have given priority to security matters at the expense of any aesthetic consideration," added Mathur.

New Delhi lives with the daily rhythm of uncertain weather, especially during the monsoon, and frequent power cuts. "If there is a flood, pumps and gates are provided to drain the water," explained E. Sreedharan, head of the project. "In case of a power cut, three different power stations will provide the metro with electricity. So if one fails, the others will be able to supply power."

After the excitement of the new system has died down, it remains to be seen if the Delhi's denizens will retain interest. But Sreedharan is hopeful. "We want the people of Delhi to be proud of the metro" and take to heart our slogan 'Delhi metro, meri metro' (Delhi metro, my metro)."