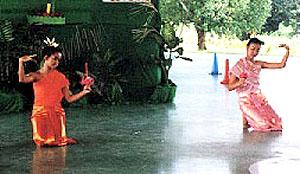 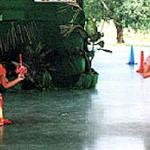 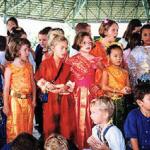 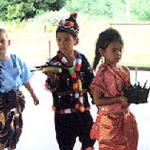 As with many traditional festivals, the Thai festival of Loy Krathong, known as Yi Peng in the north, has many conflicting explanations of its purposes. Is it a Brahmanic rite honoring the dead? A plea for an end to the rainy season? A celebration of the end of rice planting? An act of repentance for dirtying the river, an act of homage to the River Goddess Mae Khong Kha, or worship of the heavens generally? Is it a way of ridding oneself of bad luck, or the accumulated sins of the year past? Or is it merely another excuse for fun-loving Thais to whoop it up?

According to one version of popular history, the festival was established under the reign of Sukhothai King Rama Kamhaeng in the 13th century. His wife, Nang Nobamas, daughter to a Brahmin court priest, was the reign's most esteemed poetess. She introduced to the King the practice of constructing floats of lotus flowers to send down the river. Suitably impressed, the King made Loy Krathong into an official state ceremony. (Loy means, "to float", a krathong is a "receptacle made of banana leaves.") The Nang Nobamas Beauty Contest, taking place in Chiang Mai during the festival, commemorates this - supposedly very beautiful - woman's contribution to Thai culture.

But this story may be mere legend. Some scholars have recently assailed the commonly accepted idea that Rama Kamhaeng devised the Thai system of writing in 1283. Instead, it is possible that the polyglot 19th-century King Rama IV fabricated this first formulation of Thai script in order to demonstrate to the colonizing Europeans that Thai culture and learning was on par with Europe's. Or he might have intended to create a false, but expedient sense of Thai national identity to help deflect colonial encroachment. Possibly the Loy Krathong legend was created for similar reasons.

In any case, Loy Krathong has become perhaps Thailand's most anticipated festival, and is certainly its most beautiful, colorful, brilliant, and - at least until this year, with Bangkok's government cracking down on the use of firecrackers in public places - noisy. Still, the fireworks begin well before the festival's actual commencement, occurring on the day before the full moon of the 12th lunar month, which usually falls in late October or November.

Building krathongs is an integral part of the festival and a social event in itself, although it is possible to buy pre-made krathongs at roadside stalls. A krathong's base is a squat, cylindrical cross-section of a tree's spongy stem. In Bangkok, experiments have been made with using Styrofoam instead, because the decomposition of umpteen organic krathongs consumes oxygen needed by marine wildlife. Of course, for all intents and purposes, Styrofoam doesn't decompose at all, which makes the notion of the festival as "an act of repentance for dirtying the river" quite absurd.

In general, krathongs are made using only natural materials. Thus, artfully folded banana leaves are attached to the krathong base using toothpicks instead of staples, and then the krathong is loaded up with all manner of biodegradables: candles, flowers, joss-sticks, incense, a lock of hair, or a fingernail clipping. Coins tend to be the only more durable objects included.

Finally, the candles and incense of the krathongs are lit, and the throngs descend upon the shores. They make a wish and set the krathongs afloat. Any body of water will do, but in Chiang Mai activity centers upon the Ping River, and in Bangkok on the Chao Phraya. In the coastal communities, krathongs are launched into the ocean, even though they are likely to wash up later. I wonder: If the intention of floating kratongs is to cast away one's sins, is their return some confirmation of the irrevocability of karma? Mai bpen rai. Just light up a sparkler and head for the river.