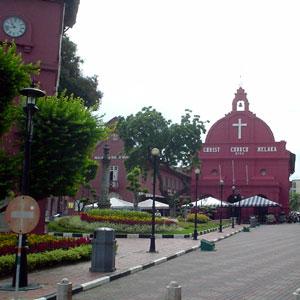 Christ Church Building with the Town Square's Clock Tower in the foreground. 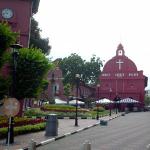 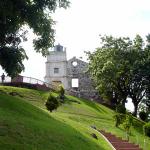 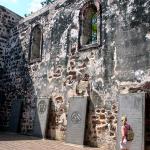 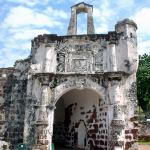 Malacca is a place where you can liken it to "a museum within a museum". Your surroundings changes the moment you cross the border and enter into this tiny state. Because it is known as the historical city, Malacca has ample tourist facilities and well-placed signboards to guide you to your specific places of interest. There are strategically and beautifully landscaped gardens/parks greeting you on the outskirt of town as well as easy road directions pointing you towards your next stop!

Malacca is a place that is so rich in history that I feel it is a huge museum on its own. When you enter the town and start your exploration, you will again find many mini "museums" depicting a series of historical events that will bound to stir the curiosity in you.

One of the most obvious pieces of historical remnants from the colonial days stood in the form of buildings. Everywhere you look, you will see quaint old buildings, in which some are as old as the history of Malacca itself. Be it large old church buildings, colonial homes, or even old-time shop houses, the buildings of Malacca offers a huge thrill for those who are interested in history. It is also the perfect place for "trigger-happy shutterbugs"!

What's best about Malacca is that most of the historical buildings are a short walk away only. With well-placed directional boards in both English and Malay languages, it would not be difficult planning your little walkthrough. However, if you wish for more information, then do drop by at the tourism office to grab some maps or brochures.

Most people would start their journey at the town square. Here, the trishaws will be the most striking thing to catch your eye. Some of the trishaws are old and worn-looking whilst some are impressively gaudy. There are bright tinsels and trinkets in hues of bright orange, red, and yellow hanging from the umbrella covering over these trishaws. These trishaws are a traditional form of transportation in Malacca and the journey will bring you around to some of the common historical spots around the city. Perhaps business is slow these days, for the trishaw-man is most willing to lower his prices from RM10 to RM5 after some slight haggling. However, I did not splurge on these rides as I had my own transportation. But be warned, tourists, for you will be offered propositions at least half a dozen times just by hanging around the town square area.

Although many would swear that the town square is the most photographed area in Malacca, I wish to add that the nearby striking red Christ Church building is more attractive to me than most. Built entirely of red bricks that were brought in from Holland, the building was erected by the Dutch and was later converted by the British for Anglican usage. Built since 1753, the church is a fine example of the Dutch's architectural skills. Some interesting points to note are the handmade church pews, the Brass Bible, the "Last Supper" in glazed tiles, the tombstone in Armenian, and of course, the skillfully-made ceiling beams done without any joints. To date, this fiery red building is still very much in use.

Next to the Christ Church building are various stalls selling a variety of souvenirs, trinkets and other handmade handicraft items. For those who would like a little something to bring home to, this would be one of the places to buy them. Of course, do not commit too soon as the city holds many more places for souvenir-hunting and such!

Of course, the town square itself is a beautiful place. There is a fountain and a clock tower in front of the impressive town hall. There is also a very European feel to the overall landscape. It is no doubt, a great place for snapping pictures. The town hall is known as the Stadthuys. Now having been converted into the Historical and Ethnography Museum, the Stadthuys was once used as the official residence of Dutch Governors and their officers. Built in 1650, the building has been maintained and preserved in its original form. Visitors to the Stadthuys will now get to admire artifacts from the glory days of Malacca as well as rich traditional bridal costumes.

Although the building was originally white in color, it has in later years, been repainted to red, which matches the Christ Church building and in turn, gives the surrounding area a theme. Many claimed that the Stadthuys is the largest Dutch-built edifice in Asia.

When you are done admiring the nearby buildings at the town square, now is time for a little climb. Head over to the steps at the foot of St. Paul's Hill (Bukit St. Paul). These steps lead to the remnants of St. Paul's Church. Not a very difficult climb, although some parts are steeper than the rest, do take a break during your climb to admire the view of the coastline. From up high, you will be able to catch a breathtaking view of the straits and have a suitable spot with many good photo-taking opportunities. This is also a good place to snap a picture of the statue of St. Francis Xavier along with the church in its background. St. Francis Xavier was a missionary who died in the year 1553. Before his body was taken back to Goa, India, he was enshrined in the open grave for a short period of time.

St. Paul's Church was built by a Portuguese named Duarte Coelho in 1521 with various renovations added to the place throughout the 1500s. Although it is now known as St. Paul's Church, it was not always so. Its original name was "Our Lady of the Hill". However when the Dutch took over Malacca and turned the church premise into a burial ground, it was renamed. There are still various tombs of Dutch noblemen found at the grounds for that historical sentimentalism. One tomb was particularly heart wrenching. Written on the tombstone were the names and dates of family members who had past away within days from each other. Their names and ages were etched on the tombstone. Some were as young as a few months to a few years old only. The tombstone was set up by their grandfather in their memory. While this was a sad tombstone to look at, there were others that are rather interesting. Bearing skull and crossbones motifs, it will send a shiver down anyone's spine.

Therefore, for a period of time, the Dutch were occupying St. Paul's Hill while the construction of Christ Church was taking place. When it was completed, St. Paul's Hill was abandoned. After the Portuguese and the Dutch takeover, the third group of people to colonize the hill was the British. Unfortunately, part of the tower was damaged during these times and some additions were included. A lighthouse was built at the front and the church was even converted into an armory during those times!

Now, the grounds and the church are peaceful places - interrupted only by the sounds of voices and laughter from the many tourists who flock to the area each day.

When you are done exploring St. Paul's Hill, descend to the other side of the hill and you will be greeted with one of the most famous landmarks in Malacca - the A'Famosa. The A'Famosa was a large structure in its heydays, but all you now see is the remains of the original Portuguese fort. Built in the year 1512, the fort was known as Porta de Santiago. For the past five centuries, the fort has survived much hardship. It is now old but imposing, nonetheless. The fort was built by Alfonso de Albuquerque and his fleet of Portuguese men. In order to safeguard their territory after having defeated the locals, he built the fortress near the sea. A mighty fortress of four main towers and bulwarks, each tower had a purpose of its own. Two were used as residences for the captain and their officers while the last two is for ammunition and a keep respectively.

After the Portuguese lost their stronghold to the Dutch, the fort was slightly modified with the inclusion of a logo "ANNO 1670" over the arch of a gate. The destruction of this grand fortress came about during the British colonial times, which took place in the year 1806. Almost the entire fortress was demolished except for the part that you now see, which luckily, was saved by Sir Stamford Raffles who is passionate about history.

Apart from major historical landmarks or buildings, there are many more around Malacca town. The old shop houses, which are still very much in use, tell a story too. Its quaint façade and architectural style is great for photo-taking. This is also the perfect spot to shop for souvenirs or try out some of the delicious Malaccan food. Because of the melting pot culture in Malacca, the fusion of food available is simply mouth-watering and can only be found in this state itself. Be it spicy Nyonya food or wonderful sweets/desserts, Malacca is the place for it!