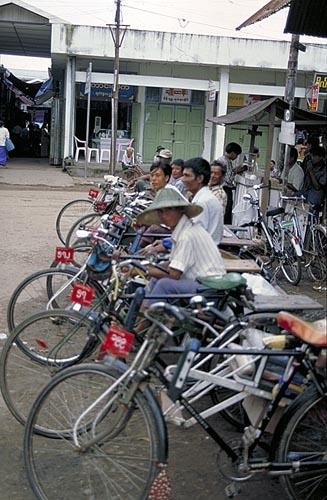 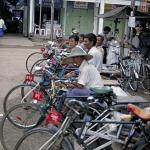 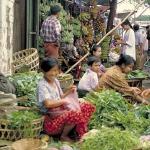 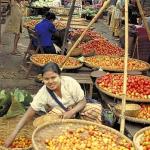 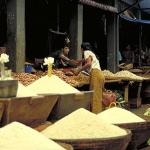 The road to Mandalay moves forward with a rhythm that is far from poetic. Pot-marked and scarred the thin grey line was drawn across the page when the words spoke of buffalo, oxen and the creak of wooden wheels. Retraced in recent years it has not fared well against tyre tread and traction. Draft animals that once set the pace now find themselves sidetracked and in the slipstream, by-passed in a moment by a hundred years of automotive history.

As the road distances itself from Yangon and exhaust pipes trumpet throaty bass-notes, bilious clouds of diesel fumes record the change of gear and continued advancement. Displaying all the persistence and impatience of petulant metronomes drivers sound their horns, break the steady stride of pedestrians and cause the nervous flutter of bicycle wheels.

With self-importance, imbued by wordsmiths past, the road elbows its way forward and on to the parched purlieus of present-day Mandalay. Pyinmana marks the halfway point - the cursory left-hand turnoff an inadequate acknowledgment to the existence of this little town. The terse response is revealed in translation, Py-in-ma-na - ‘do not take rest here'. To heed such words however would be a mistake.

Walking down the broad streets of this central Burmese backwater I was unsure if I was witness to decay or rejuvenation. Islands of creased and crumbling asphalt pushed their way up through the tender, salmon-pink earth as if the healing of a wound had begun and that within a few weeks the process would be complete. Old teakwood shop-houses leaned against their concrete counterparts seemingly propping up the bruised egos of these featureless modern creations. Languid avenues stretched forward as horse-drawn carts rolled over them, the sound of gently falling hooves keeping the beat of a different time occasionally obscured by the wasp-like drone of a passing motorcycle.

Stepping onto the home turf of redundant rickshaw drivers I deflected their relentless calls for business with a nod, a smile, and a backhand wave. Leaving them with no opportunity of a return I slipped down a darkened alleyway and out of earshot. Emerging on the edge of the morning market, the contrast was immediate.

Since daybreak the area had become a canvas stretched across narrow dirt roads brushed with strokes of violent colour reminiscent of Gauguin's palette. Squatting among nests of verdant green produce traders drew crowds as eager for gossip as they were for a good deal. Amid all the bustle and banter images of order and abstraction sat comfortably side by side. Down one street, shallow bamboo baskets lay stippled with startling red and orange tomatoes, each one calling out for attention. Down the next, a miniature landscape of rice mountains brought to mind images of cooler climes while the pure white lilies placed at their summit expressed sublime attention to detail. With every glance or tentative inquiry I was greeted with a capacious smile and a handful of playful words shared with neighbours. Each woman's face, cheeks washed with pale yellow powder extracted from the bark of the Tanakah tree, exerted a mesmerising glow - circles of pure light illuminating sun blessed skin. Fresh flowers tucked into coils of woven hair revealed yet more sketches of Gauguin. Everywhere tripods of bamboo, from which hung the trader's scales, cleanly dissected space.

Dividing the town is the Ngalaik River, its seasonal swellings giving rise to the rich deposits of alluvial soil from which this fertile market town originally grew. In the surrounding villages, with the promise of a pinprick and a prayer, golden chedi spires offer welcome relief to a heavily distended sky. Paddy fields sown with strands of neon, gently sway, energized by the threat of rain. A little further from the environs of Pyinmana, as the land begins to roll and rise, strings of bamboo houses tie themselves loosely to lush green hillsides. The rice bowl of the central plains looks all the more appetizing when served with a crisp side-salad.

On a daily basis the inhabitants of those outlying villages sit in the market and dole out a little sales patter, weigh up the competition and throw in a little extra something for good measure. Stopped in my tracks by a powerful aroma I stood and watched as a street vendor went through the ritual process of selecting a durian for a customer. Reaching out for this most unlikely of fruits his fingertips, defying the armoured exterior, pulled it dangerously close to his face. Eyes closed and inhaling deeply he responded to its pungency with a knowing smile, found the weak spot, carefully inserted a slender blade and broke the seal. With its defenses breached the durian yielded to further pressure eventually cracking to reveal its treasure - two golden pillows of succulent flesh.

The atmosphere of the market is intoxicating. The lips of young girls offer thick smoky smiles whilst holding slender green cheroots and old ladies dispense ‘cure all' herbal remedies. A raucous laugh reveals a flash of silver teeth proving that in Pyinmana it really does pay to put your money where your mouth is. As barrow boys raise a sweat wheeling around wooden barrels of cool drinking water others seek the welcome shade cast by groves of oversized umbrellas. It's all a sight for sore eyes. Crowded but never claustrophobic the townsfolk go about their business in the market with a captivating grace and an intriguing economy of movement. With the notable exception of the durian almost everything is carried on the head. Standing tall against the downward pressure of anything from baskets of bananas to bundles of beans diminutive Burmese women walk with an easy stride and a beautifully upright posture. Thinking nothing of this extraordinary balancing act the women squat down to inspect the produce on offer, make a purchase, reach up, place it in the basket and rise again.

Away from the market lines nuns exchanged Buddha's blessings for a few grains of dry rice. Wrapped in pale pink robes, the shaven headed girls walked in single file collecting daily contributions from the faithful. Pausing for a moment to watch I was greeted with a sweet rhythmic roll of words, barely above a whisper, ‘Please give a donation to the Lord Buddha.' Obliging, I was rewarded with a heavenly smile.

The whole of Pyinmana seems to move with that same sweet rhythmic roll. Here, a stones throw from the road to Mandalay among the pockets of colour and calm, a small market town is poetry in motion. Should the words on the page ever be re-written they would surely advise a rest in Pyinmana.