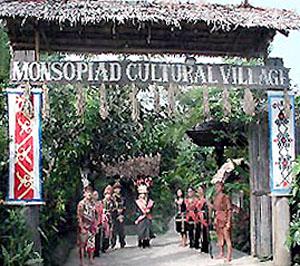 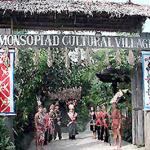 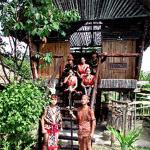 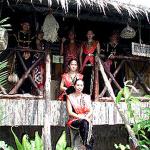 Opened in 1996, the Monsopiad Cultural Village is a must-see for visitors who are into culture, traditions and history. This cultural village was set up in tribute and memory to the great Kadazan Warrior and headhunter, Monsopiad. Located in East Malaysia, the historical Village is the only one in Sabah and is fringed by the scenic Moyog River banks. Monsopiad lived here some 300 years ago.

The Village is a living museum as well as an interesting sightseeing spot. Here, you get firsthand insight into the daily lives of Sabah's largest ethnic group, the people of Kadazan-Dusun descent. Everyday, you can view traditional dances and musical performances.

Once you step into Village, you are transported back in time where headhunters and spirit worshippers roamed the land; a place and time when the village was controlled by the Bobohizans (female high priestesses of the Kadazan). The Village keeps the culture, beliefs and traditions alive. The Village is run by Monsopiad's direct descendants and their stories will leave a chill down your spine... so vivid they are that it felt as if the warrior is still living amongst them.

Many who have visited feel that one of the true essences of Sabah is the Monsopiad Cultural Village. You cannot say that you have been to Sabah if you did not pay a visit to this historical site.

Sabah has over 30 different ethnic groups, speaking in as many languages, in over 80 different dialects. The largest ethnic group is the Kadazan people, which make up of 20% of the population in that state.

The Kadazans are part of the Kadazandusun community. They were termed "Kadazandusun" only in modern times when the phrase was coined to unite various ethnic entities of the Dusunic language community. Although part of a single community, the Kadazan people and the Dusuns are generally different in living habits. The Kadazans live on plains and valleys whilst the Dusun people dwell on hilly grounds. Within the Kadazan group itself, there are also various tribes and some language variations. Monsopiad's people belong to the Tangaa sub-ethnic group.

The Bobohizans, female priestesses and guardians/teachers of the people, are shrouded with legends and mystical tales. Their exact origins are not known and their languages do not cover the written language. Although they lack in that arena, yet the Kadazans have more folklores and legends than any other tribes. Their stories are always magical, mysterious and of courageous tales and wonderful deeds. Amongst so many, their all-time favorite hero is Monsopiad. His headhunting trophies and sword are still kept by his family to this very day.

Legend told that many centuries ago, a lady named Kizabon was pregnant. She lived in a house with her husband, Dunggou. On the roof of their house, a sacred Bugang bird made its nest and stayed there throughout Kizabon's pregnancy.

When the child was due to be born, the Bugang birds hatched as well. The father of the child took the sign as a good omen and that this was a sign that his newborn son would have special powers. He named his son, Monsopiad. The father paid special care to the birds as well, and whenever his son took a bath, Dunggou would take the young birds down from their nest to have a bath with his son. When done, he later returned them to the safety of their nest. This was done diligently until the birds were strong enough to leave the nest.

The young boy grew up in the village Kuai (which is the grounds of the Village). His maternal grandfather was the headman of the village.

However, their village was often plundered and attacked by robbers and due to the lack of warriors in the village, the villagers had to retreat and hide while the robbers ransacked their homes.

But for Monsopiad, things were different. He was given special training and he turned out to be an excellent fighter and grew up to become a warrior. Well-equipped, he vowed to hunt down and fight off the warriors that had terrorized his village for so long. He will bring back their heads as trophies, he claimed, and hang them from the roof of his house!

All he wanted in return was a warrior's welcome, where his success will be heralded by the blowing of bamboo trumpet. In order to prove that he really did as promised, three boys went with him as witnesses.

Just as he had promised, Monsopiad's journey to rid his village of the robbers was a huge success and upon coming home, he was given a hero's welcome. He was so honored by the welcome that he proclaimed he will destroy all enemies to his village.

Over the years, Monsopiad soon attained a reputation and there were no robbers or evil warriors who dared to challenge him. However, the urge to kill had gotten into Monsopiad's head and he simply could not stop himself from beheading more people. Very soon, he started provoking other men into fighting him so that he would have an excuse to kill and behead them.

With his changed attitude, all the villagers and his friends became afraid of him. Left with no choice, the village got a group of brave warriors together and they plan to eliminate Monsopiad. Much as they respected Monospiad for his heroic deeds, yet they had no choice for he had slowly turned into a threat.

One night as planned, the warriors moved in for the kill as Monsopiad was resting in his house. As they attacked him, he fought back fiercely but realized that he had lost his special powers that were bestowed upon him by the Bugang bird. By abusing his gift, he was left powerless and it was that very night that Monsopiad's life ended.

Despite his downfall, the villagers still loved Monsopiad for all that he had done for them. All in all, he collected 42 heads and a great feat that was! In honor and memory of a once great warrior, a monument was erected and the village was renamed after him.

Note: Special thanks to www.monsopiad.org for their permission to use the photos and other resources.