My visit to the Yasukuni Shrine 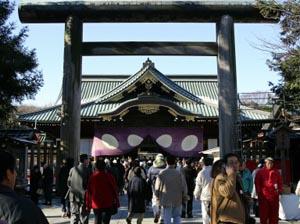 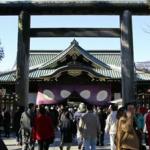 His private visits to the Yasukuni shrine provokes the ire of many Asian countries. Why does Prime Minister Koizumi visit the Yasukuni shrine? I didn't know. As it so happened, I had moved to Shinjuki and was living within walking distance of the shrine. So, one April morning, I made my way there to find out.

In my mind's eye, I had thought the shrine itself would be larger and more imposing than it was. I was struck by its simplicity. I had double checked with one of the security guards on duty. "Sumimasen" I asked. "Yasukuni koko?" I said and gently pointed to its direction with my hand. He nodded his head and uttered a "Hai." He then instructs me on Shinto protocol in Japanese and reminds me to clap twice. I reply with an "Arigato gozaimasu."

The complex is bustling with activity. There are many visitors present. There's a live performance taking place on a makeshift stage. I notice that there are many Japanese seniors in attendance.

I walk towards the shrine. I instinctively sense the reverence of the place. Many are offering their respects. It is a special place. I can see that. I can feel it. It is a place of worship.

The fallen become guardian divinities and protect Japan from evil.

I spend many hours working my way through the exhibits on the two floors. Many of the exhibits have been translated into English. There are exhibits on loan from the Imperial Family. I begin to realize that there is a connection between the Imperial Family and the Yasukuni shrine. There is a moving images presentation on Japan's military past which I watch. I take a seat in the back. I notice that many Japanese are weeping silently. The atmosphere is charged with emotion.

I take a break and sit in the lounge area on the second floor to collect my thoughts. I feel weary. I am feeling tired. I feel slightly overwhelmed by it all but I continue on with my visit.

The Kamikaze exhibit leaves me feeling terribly sad. The photo portraits of the Kamikaze overwhelm me. There is a volume of their correspondence that has been translated into English which I read. Their words leave me feeling numb.

I explore the grounds of the enclosure. There's a sumo pit on the premises and a lovely Japanese garden. My visit to the shrine leaves me with a deeper understanding of Japanese people and Japanese modern history. I come away with the understanding that the Yasukuni shrine, the Imperial Family, and the Sakura (cherry blossoms) shape the identity of the Japanese people. Yes, the shrine houses the names of Japan's convicted war criminals but also those who fought for a modern Japan.

Travels along the JR Iida line - Part One