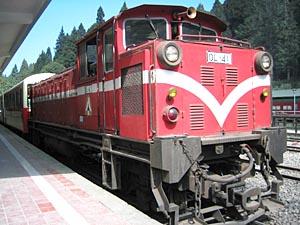 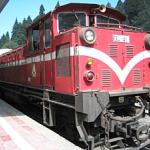 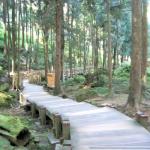 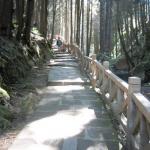 While a sunrise comes and goes in a moment, you can spend all afternoon (or a few afternoons, actually), hiking in the Alishan National Forest Recreation Area. The 80,805-acre area has several well-marked and well-maintained walking trails leading through the cypress groves.

Alishan still bears the scars of the Japanese exploitation of its natural resources during the period Japan occupied the island (1895-1945). The Japanese harvested much of the Alishan forest to export the wood to Japan. At least one cypress tree bears an inscription dedicated to the kami of the forest: an ironic attempt to placate spirits that live in trees, which the Japanese respected and revered in their own country, all the while plundering the homes of kami in foreign forests. After the resources were nearly depleted, the occupation forces turned to tourism to get income from Alishan. Much of the area has been reforested, and tourism has been the region's focus ever since. A highway built in 1982 made the region more accessible for tourism.

After returning from our early morning sunrise sightseeing, I explored the "Travel Trail" hiking trail, which lead past landmarks such as Three Generation Tree, the Elephant Trunk (tree stump shaped like, you guessed it, an elephant's head and trunk), and to the Alishan Thousand Year Cypress. Finding the Shou Cheng Temple further along the trail, in the midst of a national forest, came as a great surprise. Near the temple, I found a vendor selling fresh wasabi, cultivated from wasabi root grown there in the national scenic area. There are even primary and junior high schools here in the forest area.

I've heard springtime is a nice time to visit Alishan, and tour brochures list March to mid-April as the best season to view flowers in full bloom. During this time of year, the area is known for its varieties of cherry blossom, lily magnolias, Mori's rhododendron, and witches gloves. Of course the cypresses stand as homage to the great forest year-round, and some say November-February is the best time of year to see the sunrise from Alishan (for more details on sunrise, see Part I). When I was there in late October, the hike through the forest was cool and quiet, a relaxing experience taken at one's own pace. (Peak season may be much busier than what I experienced.) We passed very few other tourists on the trails.

A train ride down Alishan to the Chiayi Station is a memorable way to end such a trip. Built between 1906 and 1915 for logging purposes, the railway down to Chiayi has four switchbacks on its way through the forest. The train moves slowly on the narrow-gauge track and the odor of diesel permeates some of the cars, so try to sit where the smell isn't so strong, or you'll be stuck inhaling fumes for a 3+ hour trip. Despite its shortcomings (noisy, diesel engine), the Alishan railway is part of the mountain's history.

The train makes stops at small stations between Alishan and Chiayi, and at some stops, vendors will get on the train and offer snacks for sale. Otherwise, neither food nor beverages are available on the train.

The Chiayi-Alishan ticket costs NT$399 one way or NT$680 roundtrip. You can find the train schedule and complete train information at the Alishan National Scenic Area Web site. The Alishan Forest Railway site hosted by Chih-Wen Hung offers interesting details of the Shay steam engines used on the Alishan railway.