Nighthawks at the Night Market 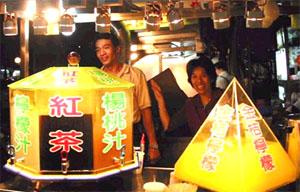 A purveyor of fine beverages at the Shi-Lin Night market. 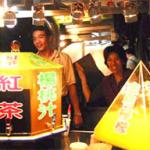 It was 11:30 PM, a cold front had just blown into Taipei, and I was in bad need of a second quilt. My cell phone was shot -dropped it one time too many. In this town, a freelancer without a cell phone might as well be a deaf mute. And I was hungry too, with a powerful craving for some marinated squid served on a stick, maybe some fresh soymilk to wash it down.

No problem, I thought. The answer to those needs, and a thousand others even more obscure, were waiting for me at the night market. The only question now was "which one". The Taipei Rapid Transit system was closed, and as I live in Mu-tza, on the rim side of the basin inside of which sits greater Taipei City, I decided to take a cab to the Keelung road night market. At this time of night, my neighborhood is nearly dark, living up to its reputation as a sleepy bedroom community. But at the night market, night and day are reversed, and the lights from the stalls are bright enough to block out the moon. In this part of town, commerce is king, and every night is like Christmas Eve day.

The cab lets me off on Keelung road, on the edge of the market edge, and dozens of smells compete for my attention. Sausages broiling on an open flame, yams cooking in gigantic stone kiln mounted on the back of a three wheeled scooter, exhaust fumes from the scooters being revved aggressively by their teenaged owners at the crosswalk, tofu being cooked in three different styles; barb-e-qued, stewed, and the strongest smell of all, fermented and deep fried, or "stinky tofu," a local delicacy. I don't spot a squid vendor; so I opt to assuage my hunger with a stick of gi pi, which is, to put it politely, chicken buttocks. A strange texture, fleshy yet crunchy with softened cartilage, gi pi hits the spot, washed down with a cup of freshly extracted sugar cane juice.

Hunger sated, thirst slaked, even if only temporarily, I work my way down the market, looking into the stalls on the sides for what I want, ignoring the invitations of the freelance vendors, those with no fixed location who hawk their wares in middle lane.

I guess I do need socks. The ones I have are wearing mighty thin in the heel.

"Five pairs, 100 NT!" I shout at the vendor, a middle aged woman standing on a ladder.

I start to walk away.

A good deal; I really do need new socks.

I walk further into the market's belly, the sights, sound and smell of its entrance a distant memory now. What did I come here for anyway? Oh yes, I was cold, though it's hard to believe that now. The night market has a climate of its own. I come towards a stall from which emits an electronic cacophony. The old man is selling alarm clocks, and they're all set to go off constantly, to advertise their effectiveness. They must be working, because nobody around seems to be sleeping.

"O-HIO! (good morning)" Screams one shaped like a Japanese cartoon character famed for prowess in flatulence. "Time to wake up, time to wake up, time to get out of bed" sings a plastic dog in a 45 RPM falsetto. A few plastic chickens screech "Cock A Doodle Doo," cows moo, bells ring and birds twitter, all way to loud for anyplace but a night market, where their endless chiming seems to fit right nicely into the overall din. I hasten my pace. I don't need a clock, and don't appreciate the reminder that I need to wake up in just over seven hours.

There are several shops selling cell phones, and I pick one at random. The proprietor, a teenager with earrings and dyed blonde hair, seems uncomfortable at first, as if seeing a white face reminds him of the hundreds of hours he's wasted in forced & futile English study, but loosens up considerably when I start talking to him in Mandarin.

"I broke my old phone, and need a new one. Can I put my old IC card into any of these?"

"Yeah, no problem. I'll just switch chips, you'll have the same number and everything"

I shop around, find one I like, and inquire price.

"How much for this one?"

"Nah, too much trouble" he says, but then, he seems to have an epiphany. "What did you say was the problem with your old phone?"

"Dropped it on the stairs," I tell him "it still dials out, but it doesn't ring."

He smiles, for he is a young man with a plan to make some personal money on company time.

Of course I say yes. He tells me to leave the phone and come back in a half an hour.

I'm out again in the sea of people, looking for something to keep me warm on this cold, cold night.

Not that, however. I barely look at the thuggish looking teenager hawking puppies in the middle of the lane, and he barely looks back at me. He knows I'm not a likely customer. As I walk past, he yells "A friend for life," and I'm contemplating who's life he means, when a KA-BOOM from three stalls up nearly sends me ducking for cover. A second later, the smell of bong li pang, or "exploding fragrant rice" wafts through the market. It says a lot about Taiwan's overall sense of security that its people aren't freaked out by a local snack that explodes in preparation. The Buddhist nun chanting with her alms bowl ten feet away doesn't even seem to notice. I buy a warm brick of the stuff, which resembles a gigantic Rice Crispy treat held together with honey instead of marshmallow. Served with soymilk, bang li pang makes its own sauce.

Somewhere mid market I spot a stall selling miem bei, the thick Taiwanese quilts that, in a pinch, can double as mattress. While the young typically work the cell phone racket, miem beis are strictly an older person's game. With a minimum of haggling, I score myself a thick one, light pumpkin with no cutesy cartoon characters for 500 NT. Figuring that thirty minutes has passed, I head back to the phone shop.

"Here you are, no problem" Says the proprietor, now my hero, having just saved me thousands. He hands me the phone and uses his own to dial my number. Seconds later, my formerly silent phone begins chiming to the tune of "Flight of the Valkyries."

"Works great, but why did you change my ring?"

"Your old one was boring! I fixed it for you"

I pay him, thank him, and head out the door with my working cell phone, miem bei, brick of bang li pang, back of socks, and stomach full of chicken ass. It's well past midnight, but the market is in full swing. I'm not, however, and push my way through the crowd back to the market's edge, where I hail a cab back home, mission accomplished.

Halfway back to Mu-tza, it occurs to me that I never got my squid, but that's OK. There'll be other nights for squid.