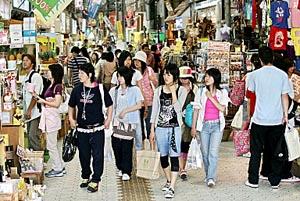 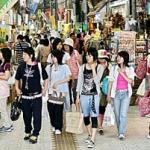 NAHA, Japan, July 1, 2005 - Reminders of World War II bloodshed are everywhere on Japan's southern Okinawa islands, but with its subtropical climate, laid-back inhabitants and natural beauty it has emerged 60 years on as a haven for those seeking respite from the pressures of modern life.

Ever-increasing numbers of settlers and tourists are coming to this chain of islands which, besides the clutter of US military bases and ubiquitous war memorials, has an old-world charm, boasting beautiful beaches, turquoise seas, coral reefs, forested hills and traditional fishing villages.

"Half of them have come with dreams such as engaging themselves in the arts or making a living out of the sea. The others are here just to relax," Mantaro Shiragane says of fellow migrants from Japan's main islands further north, which uphold the country's hectic economic recovery. "But there is a gap between what they have imagined and the reality," stresses the 36-year-old former music producer who has run an arts-and-crafts shop for five years since settling here with his wife.

"About a third go back after a year or so," he adds, citing people who had come without clear knowledge of Okinawa's brutal past and limited job opportunities.

Shiragane's shop in the Heiwa-Dori (Street of Peace) shopping mall was teeming with tourists last week while Japan marked the end of the bloody Battle of Okinawa, which resulted in 200,000 deaths. Of the dead, an estimated 94,000 were Okinawan civilians, a fourth of the island chain's population at that time.

Okinawa, a former independent kingdom annexed by Japan in the late 19th century, still bears the scars of the sacrifices it made for mainland Japan.

Numerous monuments to the war, when all-out US bombardments called the "Typhoon of Steel" wrecked much of the island, distort its scenic landscape. Closure is also difficult when the remains of 4,400 war victims and an estimated 2,400 tonnes of unexploded bombs remain missing.

For some visitors, the war is a reason they come here: one tourist attraction is a cave in which dozens of female students who served as war nurses killed themselves.

But nowadays more are seeking a break from the stresses and strains of living in urban Japan. Last year, the number of tourists coming to Okinawa reached a record 5.1 million, compared with its population of 1.4 million.

Only 440,000 came in 1972 when the island chain reverted to Japanese rule after 27-year US occupation. The visitors spent 360 billion yen (3.3 billion dollars) in 2004, or about 10 percent of Okinawa's revenue. A further 26,400 people also registered as new residents in Okinawa last year.

The lure is obvious. "Healing by the sea", reads a housing advert in the bi-monthly magazine "Okinawa Style" which was launched 17 months ago to focus on dos and don'ts for new settlers and has a circulation of around 100,000 copies nationwide.

"All types of people come here," says Kiyomi Gon, 34, the magazine's editor, who has moved in from Tokyo, though many drawn by Okinawa's familiar charms such as "the pristine nature of people and the slow passage of time".

Newcomers run cafes, souvenir shops and outlets for diving and other marine sports. Some of them are ordinary pensioners, fishermen, nature photographers or students of Okinawan crafts such as the primitive local pottery of Tsuboya and the colourfully stenciled fabrics of Bingata.

They also practice syncopated folk music with three-string lutes, which permeates the islands which have strong cultural and commercial links with China and Southest Asia.

"But without vocational skills, the hurdles are high for people who just drift in," warns Gon, noting Okinawa's jobless rate of 7.3 percent, the highest in Japan and well above the national average of 4.7 percent.

Gon says the influx of people has not been blocked by the spectre of past war and the heavy US military presence here, though some residents are upset about some newcomers' lack of sensitivity.

"Some provoke natives by lacking respect for their history of independece and war," shopowener Shiragane says.

Okinawa hosts 65 percent of the 40,500 US troops in Japan while other areas of Japan have resisted accommodating US bases. It has been used as a staging, logistic and training base for US wars in Korea, Vietnam and the Gulf.

Two years ago, the town of Kadena built a highway rest area with an observatory for tourists to watch US warplanes take off and land at Kadena Air Base, the largest military installation in the Asia-Pacific region.

Seiken Tokuzato, 63, a former electric utility worker, spends his daytime hours with other pensioners, keeping vigil on two giant runways there from a mound outside the base.

"I know the United States will never give up this base. They are strengthening it," he asserts.

Despite a global plan to reduce its 230,000 troops abroad, the US military has been slow in consolidating its facilities in Okinawa as it pledged to do after the 1995 rape of an Okinawan girl by three US Marines.

For a year, islanders have been staging a dawn-to-dusk sit-in on the beach and in offshore rigs to protest against a plan to build a runway on a coral sea as a substitute for the Futenma Marine Corps air station in the crowded city of Ginowan.

With money from visitors and settlers a vital part of the local economy, tensions are running high.

"They had better build the runway at Kadena rather than destroying the nature," Tokuzato laments. "Tourism is what Okinawa thrives on."