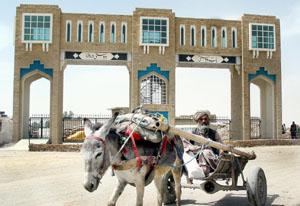 The Gate of Friendship at the Pakistan-Afghanistan border. 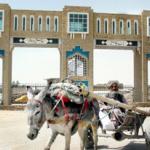 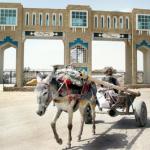 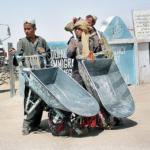 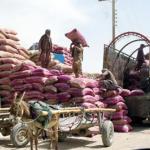 CHAMAN, Pakistan, May 13, 2003 - It was supposed to unite, instead it divides: the "Gate of Friendship", a new border post linking south-west Pakistan with south-east Afghanistan today symbolises the ambiguity of links between the neighbours.

The gate -- two large ochre arches covered in blue tiles, overlooking scores of ramshackle Afghan and Pakistani traders' stalls in a one-kilometer no-man's land between the dusty border towns of Chaman in Pakistan and Spin Boldak in Afghanistan -- is supposed to formalise what has always been an informal border. However, murky territorial disputes borne of long-held tribal and political rivalries are likely to keep pouring chaos on any attempts to impose order.

"This is Afghanistan," asserts Hadayetullah, 40, an Afghan vegetable trader standing at the foot of the Gate of Friendship arches. Like many of his fellow countrymen, he uses just one name. "They (the Pakistanis) have taken advantage of the absence of security forces by building their gate here, but the border was always over there", he says, pointing to a Pakistani checkpoint, 300 metres further east.

His claim is contested by Captain Iqbal Shah of Pakistan's Pishin Scouts, who guard the porous frontier on this stretch of Baluchistan province. "Pakistan has only returned to the official border as it existed before the Soviet invasion of 1979," Shah said. "To keep our distance from the Soviets, we withdrew our first defence back. (Now) we have simply returned to the Durand Line."

Agreed on in 1893 by Sir Mortimer Durand, the British colonial administration's foreign secretary, and the then Emir of Afghanistan, the line defined the westernmost stretch of the vast British Indian empire. It runs 3,000 kilometres (1,860 miles) from the heights of the Hindu Kush ranges in the north to the southern shores of the Arabian sea, demarcating Pakistan's borders with both Afghanistan and, further south, Iran. However, on a 1,000 kilometre stretch between the Pakistani cities of Peshawar in the northwest, and Quetta in the south, the Durand Line cleaves territories inhabited by fiercely independent Pashtun tribes.

"We are all Ashakzais," said Chaman-based professor of English Abdulwaris, referring to one of the Pashtun tribes. "My brothers and cousins live in Chaman and work in Spin Boldak, and vice versa," he explains. In his eyes, building the Gate of Friendship was an act of "treason". "We don't need to be declared friends as we are all the same family," Abdulwaris said.

Residents of Spin Boldak still cross freely between the border cities, aiding the rampant smuggling of products between Gulf countries, Iran and Afghanistan. Some 300 to 400 trucks traverse the frontier each day, often using minor roads which avoid checkpoints, according to Pakistani customs officials in Quetta.

At the Chaman border post, the traffic is relentless. Young men ride Chinese bicycles still wrapped in plastic into Pakistan, while children buckle under the weight of hi-fi equipment or cans of gasoline. In the other direction, flour, dried fruits, wood and marble are carried into Afghanistan, under the nose of the indifferent Pishin Scouts.

The Gate of the Friendship was completed in September, but its official inauguration has been postponed back several times. Shah blames the Kabul administration. "The local Afghan authorities want this," he said, "but it's the people in Kabul who are making problems."

The Afghan government, dominated by ethnic Tajiks who led the US-backed Northern Alliance which ousted the former Taliban regime 18 months ago, is wary of Pashtuns, who made up most of the Taliban. "The problem of our border with Pakistan is a subject we study with great diligence," Afghan foreign ministry spokesman Omar Samad told AFP.

"We have been informed about the displacement of border posts. The Afghan government is following these developments with interest and is investigateing what has transpired, not just in recent months, but over the past few years."