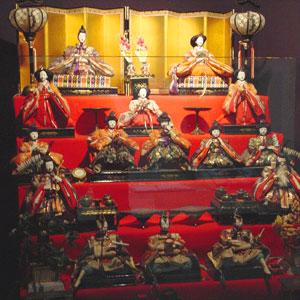 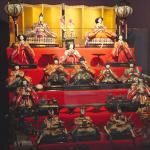 Since ancient times and in all parts of the world, dolls have been created for many reasons. To different people, dolls bring about different meanings. For some, dolls are the embodiment of spirits, or an object with magical powers, and to some, a mere plaything. Over in time, dolls have grown to be appreciated and displayed; such work of fine art is no longer confine to just a child's playmate.

While dolls are found in all parts of the world, yet no place has a greater variety than Japan. Its unique doll-making traditions are very much a part of the country's culture. The history of dolls dates all the way back to nearly 24,000 years, while the origin of Japanese dolls begins at the start of the Jomon period, which was about 3,000 years BC. However, it was only from the Edo period onwards that dolls have taken on a wider meaning and purpose, and with that, many different types of dolls have been produced ever since!

The Japanese Gosho dolls represent happy looking baby boys with chubby milky-white skin and small facial features. Generally, they are portrayed in nude or semi-nude. There are also many that wear costumes depicting their culture aspects. They are most often found in Kabuki or Noh dramas. These dolls came from Kyoto during the 17th century. During that time, they were gifts from the Imperial household to their special guests, hence the name "Gosho", which means "from the Imperial Palace". Before the Meiji period (1868-1912), these dolls were known as white chrysanthemum (shira-kiku), white skin (shirajishi-ningyo) or large head (zudai). A Gosho is not used as a toy. Instead they were given as a token of luck, a wish for a safe journey home or a strong healthy son. The Gosho are often crafted from either clay, carved paulownia wood or composition materials, and is covered with a heavy coat of gofun (crushed oyster-shell paste). It is then burnished and painted to give it a brilliant white glossy finish. Characterizations include hai-hai or crawling dolls, gift dolls, good-luck dolls, and costumed or hinged dolls. These dolls are found riding the backs of turtles or dogs, carrying treasure, cranes and fish, or playing with a toy or on a drum. Best of all, the tiny facial features of the Gosho with its minimal design captures the essence of a child in full purity, innocence, vitality and enchantment.

Then there are the Hina dolls, which are traditionally displayed at Hina-matsuri (Doll's Festival) on March 3rd every year, which incidentally is Girls' Day. On this day, Japanese families celebrate this occasion to wish their daughters health and happiness. Simultaneously, they will display Hina dolls in their homes. Ceremonial by nature, these Hina dolls are not playthings; instead they are priceless heirlooms that are handed down from generations after generations. It is then carefully boxed and stored throughout the year until the festival where it will be brought out for display again. Made of wood, straw, glass insets for eyes, human or cotton-fiber hair, and gofun, the Hina dolls are often completed by their magnificent court costumes of silk and brocade. The costumes are often embroidered with gold couching and feature an assortment of accessories, which could include a sword, bow and arrows, lacquered hat, folding fan or a elaborate headdress. Usually, a set of Hina dolls comprises of 15 characters with all of them wearing ancient costumes of the Imperial court during the Heian period (794-1192). Based upon family traditions and the number/type of dolls in the collection, the dolls are arranged in descending order on a platform of steps that is covered with red fabric.

They are placed in a manner where the Imperial couple graces the top step, the Emperor at the left of the Empress. On the following step are the right and left ministers, depicted by an old and young man. Then the three court ladies-in-waiting, five musicians and, finally, the footmen or guards. Accompanying this amazing set of dolls are miniature household items, furniture and musical instruments. There are miniature serving trays and banquet dishes, kimono racks, tatami mats, chests, mirror or sewing tansu, stools, hibachi, even dogs. The Hina dolls are one of the more popular Japanese dolls that are being sought after and passionately collected throughout the world. The charming variations of clothing, expression and characters make this doll a piece of exquisite craftsmanship. They are not only irresistible, but priceless as well.

As there is Girls' Day, there is Boys' Day too. Held annually in Japan on May 5th, the occasion is graced by the display of Japanese warrior dolls or Musha ningyo in homes. The warrior dolls depict strength, bravery and success. These heroic figures are elaborately costumed and are often seen with suits of armors bearing weapons or riding a horse. Among some of the famous characters include the first emperor Jimmu Tenno, famous warrior Yoshitsune, or Benkei his legendary loyal retainer. There is also the empress Jingu Kogo. Other popular characters are from folklore, Kintaro (Little Hercules) and Momotaro (Peach Boy). As with most Japanese dolls, the musha warrior doll is made out of wood, straw, glass insets for eyes, human or cotton-fiber hair, and of course gofun. As most doll enthusiast would notice, the clothing and accessories of a warrior doll is possibly its most valuable feature. With costumes made out of silk, silk brocade, linen or paper, the doll also come dressed in lacquered hats, plates of armor and metal helmets. With a vast assortment of accessories including banners, bows and arrows, spears, swords and war drums, the musha warrior doll is highly intricate and awesome. Accompanied by their kazari-uma (battle horses), these horses are also elaborately adorned with saddle, plaited mane and fur hide. Avidly sought after by collectors throughout the world, the musha warrior dolls are prized examples of Japanese traditions and excellent craftsmanship.

Another interesting doll from Japan is the Kimekomi doll, whch originated in the early 18th century Japan by a priest at Kamigamo Shrine in Kyoto named Tadashige Takahashi. Using willow tree wood and scraps of fabric, he regularly creates doll for shrine festivals. It was also this man that made the doll famous by using a particular feature done by pressing the edges of the cloth into the wood grain. Because of this famous technique, it is no surprise that the name of the doll is Kimekomi, which literally means woodgrain (kime) and tuck-in/insertion (komi). In today's time, the bodies of these dolls are crafted out of compacted paulownia or kiri wood sawdust. Then it is mixed with jute fiber and glued to form the clay-like substance. When the mixture is ready, it is poured into a mold to be dried and heat-treated. Now, for the part that matters most, grooves are cut into the body of the doll, so that pretty pieces of silk or brocade cloth can be tucked and glued into it. Using polished gofun (crushed oyster shell) to complete the doll's childlike head, the head is then painted with great skills and care. For many years, talented artisans are the ones who make these dolls, but their numbers are diminishing by the day. With the decrease, it is slowly becoming harder to find good quality Kimekomi dolls. A true doll collector must have one of these in their collection, for the Kimekomi dolls is the epitome of the Japanese culture, dancers, musicians, theaters and historical characters. Their charm and history makes this a much sought after piece.

For those who love dynamic toys with eccentric theatrical poses, the Japanese Takeda doll is for you. Named after a puppet theater Takeda-za (Osaka, 1662), the Takeda doll was first used as advertisements and souvenirs for the shows produced in the theater. Takeda literally means bamboo (take) and field (da). The bamboo field was said to be the quarters where the plays were performed. Extremely dramatic with exaggerated and humorous facial expressions and poses, the Takeda dolls are commonly shown in a fighting stance with some leaping into the air. A Takeda doll that radiates movement is one that is highly prized among collectors. Fluidity is what a collector must look for and this fluidness flows through right down to the elaborate flowing, fluttering costumes that they wear. Made out of wood, straw and paper, the Takeda dolls are often clothed in rich embroidered silk brocade. These dolls are not standalone as they are normally come complete with scenery and props and are mounted on lacquered stands. This has got to be one of Japan's most exciting dolls as collectors all over the world are clamoring over them. The drama and excitement that comes with the doll makes it truly priceless.

The Japanese Hakata dolls that believed to be originated in the 17th century came about when roof-tile maker, Soshichi Masaki, presented his feudal lord with an unglazed clay figure. The dolls are often characterized by their leisurely, sensuous grace that is almost life-like. Created out of clay, dried and fire unglazed, the dolls are given the breath of life by gifted artists who brilliantly apply colors to it using fine hairbrushes. Some of the popular characters include Kabuki and Noh theater figures, Buddhist and Taoist images, folk characters and customs, beautiful women and children.

It was only in the year 1924 that the Hakata dolls suddenly burst into fame when the three dancing-girl Hakata dolls won the silver prize in the Paris World's Fair. Created by the late Yoichi Kojima, the Hakata dolls gained worldwide fame and is now internationally renowned and loved. It is so popular that the Japanese government made this craft a traditional national art in the year 1976.

Another beautiful doll is the Ichimatsu that originated in the Edo period. Having derived the name from famous Kabuki actor, Ichimatsu Sanokawa, it was said that the dolls even resembled the actor. Fashioned out of carved and powdered paulownia wood and then covered with gofun, the dolls come in two forms - little boys or girls of around six years old. Their expressions are artistically painted on and they feature glass eyes and human hair or cotton fiber. Their clothing items are often luxurious and elaborate; hand-painted and embroidered traditional silk costumes with underpants and accessories such as parasols, hair ornaments, tabi socks and Japanese sandals. Many even come with seasonal clothing and accessories. Majority of these dolls come as standing figures whilst some are able to bend their knees and arms. A representation of international peace and friendship, the Ichimatsu dolls are a highly sought after collector's item. For over two centuries, the dolls are widely cherished as their enchanting faces of remarkable detail made them a must-have amongst doll enthusiasts around the globe.

Another rare doll that most doll collectors would want to add to their collection is the Bunraku puppet. One of the world's most distinguished art forms, the Bunraku began some 400 years ago when puppetry was one of Japan's favorite form of entertainment. At its prime, it was even more popular than the Kabuki. The Bunraku puppets are traditionally three to four feet in height, almost half life-size and are really flexible. They have body parts that can move. Because of this, their emotions can be clearly expressed. Painstakingly crafted from wood and coated with gofun, the characters are then skillfully painted to give that life-like expression. The puppet show has, over many years, thrilled audiences with their wits, ingenuity and storyline. In today's time, these puppets are becoming quite rare and harder to obtain. It is a must in most collection as it is a slice of Japan's history and oral tradition, and amazingly, this art form is still thriving to this very day...