Princess of Mount Ledang. Soon at a theatre near you? 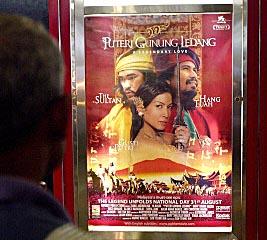 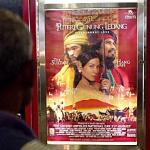 "Princess of Mount Ledang," a Malay-language period epic adapted from a centuries-old legend of a beautiful princess who scorns the affections of a powerful sultan and falls in love with his general, debuts internationally next week at the Venice Film Festival. Producers hope the 20-million-ringgit (5.3-million-dollar) drama which has had unprecedented hype domestically will become Malaysia's version of the Chinese-language Oscar-winning hit "Crouching Tiger, Hidden Dragon."

The maiden production by entertainment company Enfiniti, which runs local private television station NTV7, is directed by newcomer Saw Teong Hin. The 155-minute film, which opened the day the former British colony feted 47 years of independence, is the first Malaysian entry in a major film festival and the only Southeast Asian movie to make it to the prestigious Venice festival this year.

Since its independence, Malaysia has become known for its fast-industrialising economy and its progressive version of Islam. "This is the first time a Malaysian movie is sharing the same stage with world-class films. We see ourselves as a benchmark for other local producers to make it big overseas," said Enfiniti's executive director Shazally Ramli. "This movie may not get us a gold medal yet -- we may have to wait -- but the point is that Malaysians can do it."

The 20-million-ringgit budget, including ads and marketing costs, is paltry by Hollywood standards but a record in Malaysia where most movies cost below two million ringgit. And the sum is staggering compared to total box office takings of only 18.5 million ringgit for all 10 Malay movies screened in 2002. Director Saw, a music video veteran who will compete in the new director category in Venice, said the movie took three years to complete and aimed to "illustrate the beauty of our language, our culture and our scenery."

Set in the thriving 15th-century Malay sultanate of Malacca and the grand Javanese kingdom of Majapahit, the plot blends historical facts, myth and fiction to tell the fateful tale of forbidden love at a time when loyalty and national honour overrode personal desires. Malaysian actress Tiara Jacquelina, who is co-producer, plays the princess and singer M. Nasir is her love interest, the Malay warrior Hang Tuah. Indonesian actor Alex Komang takes on the role of the Javanese prince.

Filming began January in 18 locations including Mount Ledang in southern Johor state, now a popular hiking trail. Featuring panoramic scenery, a haunting theme song that tops local radio charts and elaborate costumes, the movie is steeped in the supernatural. Lead characters often converse through telepathy along with dramatic fighting scenes with flying warriors and huge explosions similar to Hong Kong period movies. Stunt expertise from Hong Kong was used but Saw stressed the fighting was choreographed strictly according to the Malay self-defence art of silat.

Enfiniti believes it can recoup its investment in six months with talks underway for distribution deals in the region, Europe and the United States.