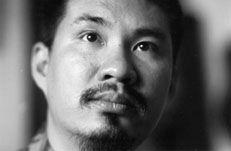 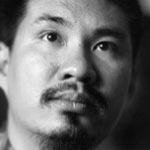 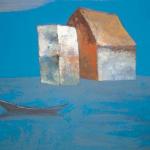 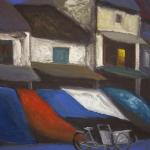 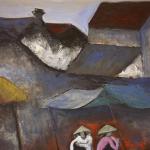 "When Fine Art descends onto the streets with appeals, it presents a love of beauty, voiced sufferings, expanding the limits of experimentation and discovery of furtive sexual desire and eroticism, as well as modernistic tradition.

Dao Hai Phong's paintings give us space for serene, peaceful and sincere contemplation. He is a prolific painter but his work is measured and controlled. A deep meditation lurks behind romantic flashes of trees, cloud, sky, a street in the rain, walls, windows and dark rooms. He adapts influences with a genuine, unorthodox learning spirit, in a way that avoids an oppressive personal perspective. Objects and subjects in the paintings, as well as method and style of expression do not seem distinctive, yet they actually have their own novel character. They are graceful to life and meaningful to art. " ...Nguyen Quan, art critic

Dao Hai Phong was born in 1965, the son of the well known artist Dao Duc. He studied at the Hanoi College of Film and Theater from 1982-1987 and won a medal as designer at the Vietnam Film Festival for his outstanding contribution to this medium. Although he had painted as a hobby from the age of six, it was only after graduation that Phong started to focus on developing his individual style.

Phong likes to use blue and other luminous, radiating colors. Most of his paintings are landscapes inspired by his travels when working on films. Although he was born and grew up in the city of Hanoi, he has recently been drawn more and more to the beauty of the countryside.

In 1992-1993 he changed his idea about color and began incorporating the use of softer colors such as gray with the vivid blue. Phong admires other artists such as Le Thiet Cuong and Truong Tan, however he believes that each artist is like a tree in a forest - each tree must have its own style.

Since 1992 he has held the position of Chief Designer of the Vietnam Film Studio, but in the meantime has continued to paint and exhibit his work.

1996 Independent in Hanoi, exhibiting with "The Gang of Five"

Van Mieu: The Temple of Literature

Resolve and Other Adoption Groups