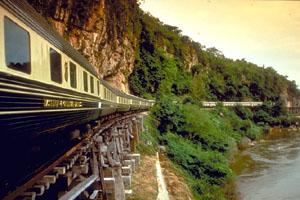 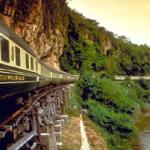 September 1993 found my partner Lisa Spivey and I in Singapore, after a long business trip in Vietnam. We were scheduled to go to Thailand and catch a flight from Bangkok to Tokyo where we would get the United flight back to San Francisco. We also had a few extra days. And the Eastern & Oriental Express had two extra spaces left on their pre-inaugural run. We couldn't have planned it better.

A quick cab ride to the E&O ticket agent in Singapore, and we had two tickets for the trip which would take us from Singapore north to Bangkok, passing through three of Southeast Asia's most fascinating countries: Singapore, Malaysia and Thailand. It would be two nights, one full day, and 1,943 kilometers (1,200 miles) of total luxury.

The E&O departs Singapore's Keppel Road Station every Sunday afternoon at 3:00 pm. One hour before departure, passengers start arriving at the station to complete passport and immigration checks for leaving Singapore and entering Malaysia. (The railway in Singapore is actually part of Keretapi Tanah Melayu - KTM - the Malaysian railway company).

A uniformed cabin steward is assigned to each sleeping carriage. When we got to our car, we were met by our steward, who showed us to our compartment and demonstrated how everything worked. Before leaving us, he made sure we knew he was on call for 24-hour room service throughout the trip. We settled in, unpacked for the journey ahead, and were served tea in our compartment.

The railway line out of Singapore follows Bukit Timah Road and then Woodlands Road north across the island. The track is lined with palm trees, neat apartment complexes and manicured lawns. As the train leaves central Singapore the housing gets less dense and gives way to small farms and gardens. After about half an hour, we crossed over the smooth waters of the Straits of Johor on the causeway which links Singapore with the State of Johor Baru on the Malaysian mainland.

Soon, we had left behind the super-modern skyscrapers and multi-lane highways of Singapore and entering a more traditional country. The landscape is flat and small villages are clustered alongside the railway line amid tall grasses and flowering trees. Village life goes at a slow pace. Women wash clothes, old men sit outside their houses smoking, and children wave at passing trains.

Two hours out of Singapore, the scenery changes to regimented rows of rubber trees with their silvery bark and feathery leaves. From the train one can just make out the diagonal gashes in the trees' bark and the small bowls used to catch the drops of latex oozing from the trunks. In the distance rolling hills show bare red earth where the vegetation has been cleared, often for mining tin, one of Malaysia's staple exports since the last century.

Farther on, nearer Tampin, the hills come closer to the railway line. Water buffalo laze in the fields. There are banana trees, oil and coconut palms, and creepers that spread out of control to engulf bushes and trees.

Dinner is served in two seatings, and the attire is dressy. We chose the first seating, and were served a sumptuous and elegant dinner in one of the two restaurant cars. For those who feel like socializing, the bar car has live piano music and a festive atmosphere.

We arrived in Kuala Lumpur just after 10 pm. The train stops at Kuala Lumpur for half an hour, time enough for passengers to disembark or board the train. Lisa got off the train to snap a few pictures of the elaborate Moorish architecture of the magnificent station building.

On departing Kuala Lumpur, the E&O travels on through the night up the Malay Peninsula, reaching Ipoh at 6:30 am on Monday. The town of Ipoh was built on wealth from the tin industry during the late 19th century. The railway provided a vital link between the tin mines and the sea via the Kinta River, and the station has a charming old-world feel.

We left Ipoh heading for the most scenic part of the journey through thick jungle and mountains where heavy rainfall ensures luxuriant vegetation. At the requested time, our cabin steward brought our breakfast trays. Hot coffee, delicious pastries, yogurt, fresh fruit, all on a silver tray with freshly starched linen. Now that's life.

On the way to Taiping, the railway track traverses a dramatic landscape, the narrow gorge at Bukit Berapit which is overhung by the rock of Gunong Pondock. At 10:00 am, we arrived at Butterworth. Everyone disembarked to take a ferry across the straits to visit the island of Penang, where we had time to visit a traditional Chinese family association building and take a quick tour of the town.

We departed Butterworth at 12:30 pm and settled in for lunch in the dining car. The railway stretches ahead across a vast flat valley, with steep rocks called the Main Range rising in the distance. As far as the eye can see the land is covered with bright green rice paddies. Farmhouses sit on islands in the paddy fields. Fish are laid out to dry in the sun. Cows wander freely. After Kedah the railway passes into Perlis, Malaysia's smallest state, and through Arau, the seat of the Raja of Perlis. Soon the town of Padang Besar marks the border with Thailand. The train arrives at 3:10 pm, and leaves at 3:00 pm (Thailand is an hour behind Malaysian/Singapore time).

The E&O passes into Thailand after immigration formalities. The differences are very apparent. Buddhist temples replace mosques. Portraits of Thailand's beloved King and Queen are displayed along the track. The very distinctive Thai architecture includes steeply pitched-roofs and houses built of unpainted wood on stilts above the paddy fields for protection from floods and snakes. This is a great time to take photos from the wonderful open-air observation car at the end of the train.

The first town in Thailand through which the E&O passes is Hat Yai. The station always buzzes with life, and any train which stops is mobbed by hawkers selling fruit and cooked chickens heaped on vast plates made from woven palm leaves balanced precariously on vendors' heads.

Next stop for the E&O is Surat Thani at 8:50 pm. Then, while we slept, the E&O continued its journey north through Thailand, stopping at Hua Hin on Tuesday at about 5:00 am. Hua Hin, 180 kilometers (112 miles) southwest of Bangkok, is a popular holiday resort for Thais.

After a 30 minute stop, we left Hua Hin for Bangkok. All along the railway line the day is beginning. Steam rises from the paddies warmed by the early morning sun as farmers make their way to their rice fields.

Once again, we enjoyed breakfast in the compartment and watched the scenery change as the train approached Bangkok's Hualamphong Station. We arrived at our final destination around 9:30 am, after a 41-hour journey through some of the best scenery we had ever seen, and then we stepped out into the heat and bustle of Bangkok.

Photo of the Day Archive for March 2005

Photo of the Day Archive for May 2004

Photo of the Day Archive for October 2006