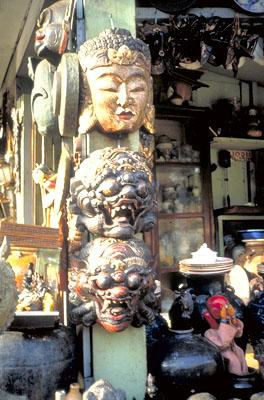 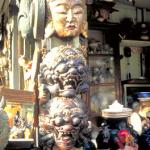 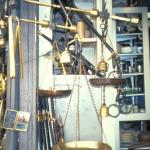 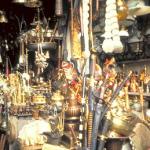 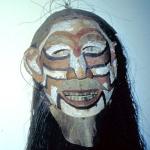 Of the many sobriquets tagged to Jakarta, "The Big Durian" is an apt metaphor. The thick and prickly skinned, football sized, fetid smelling fruit yields a fleshy meat thought by some to taste heavenly. Others find its taste to be worse than its smell.

Located on the northwest coast of Java, Jakarta is the capital and gateway to Indonesia, the republic of 14,000 volcanic islands sprawling some 3000 miles along the Equator.

First impressions are lasting. As the air-conditioned van from the airport neared the hotel, it entered a gridlock, edging forward, stopping, waiting, edging forward again, stopping, and then again waiting. Outside the insular world of the van, the air hung with humid heaviness. A motorcycle carrying a family of five, parents and three children, manipulated its way around the vehicles; heat waves danced above the asphalt. Honking was incessant; the smell of exhaust insinuated its way into the coolness of the van. Vendors walked from car to car selling magazines, newspapers, ice cream bars, and cold drinks to their captive customers. A vendor wearing one of the rubber masks he was selling peered through the tinted glass of the van, his tongue flicking like a snake through the mouth slit.

Present day Jakarta grew out of the harbor town of Sunda Kelapa where the Ciliwung River enters the Java Sea. Captured by the Dutch in 1619, Sunda Kelapa had already been a spice trading port for centuries. Renaming the port Batavia, the Dutch established a fortified trading post for the Dutch East India Company. Today the area is an inter-island harbor where dozens of tall masted schooners neatly wedged along the pier are loaded and unloaded by hand. Under the burning sun, thick, rough-cut lengths of teakwood from Sulawesi were carried two at a time on the shoulders of dockworkers who shuffled over long wobbly gangplanks that bellied with the weight. At times, the workers would have to shout breathlessly at thoughtless sightseers who wandered the dock, photographing the ships.

A group of sweating workers huddled on their haunches at a warung, a food stall shaded by a canopy of cardboard. Sharing the shade, the crouching men talked and laughed as they ate their chicken and rice from bowls and drank cold water from plastic bags. And then, they were back at work, earning their daily wage of two dollars under the brutal sun.

Sometimes a Jakarta taxi ride can seem like a scene from a play by Samuel Beckett. The absurdist drama began in the Glodok region, Jakarta's Chinatown, when we showed a cab driver the name of our hotel, written in both English and Malay. Puzzled, he sought the aid of a group of his colleagues who were gathered around a satay wagon. After much loud arguing and gesticulating, the driver returned, attempting unsuccessfully to appear self-assured. Spitting out a piece of betel nut, he motioned us into the taxi, his head nodding with false confidence.

Wedging into traffic, he mumbled something into his radio and, after much static, a voice speaking English replied in carefully measured words, "Where-do-you-want-to-go." With relief, we gave the name of our hotel. The driver chewed his betel nuts, sucking loudly through his teeth as he joined a motley assortment of buses, mopeds, cars, pedicabs, motorcycles and trucks. Again over the radio, the voice repeated, "Where-do-you-want-to-go," enunciating clearly and deliberately, with a pause between each word. Once again we hollered out the name of the hotel, speaking slowly and then repeating it for good measure. The driver sucked and chewed and honked as a young man on a motor scooter suddenly cut in front; sitting sidesaddle behind him, his girlfriend held a handkerchief over her mouth and nose. Over the static, the voice chanted its mantra,"Where-do-you-want-to-go. Where-do-you-want-to-go."

Our hotel was just ahead and we pointed it out to the driver who nodded vigorously as if he knew that was our destination, sucking loudly for emphasis. Unable to negotiate his way into the left hand lane for the turn into the hotel, he turned off the meter and with a frustration that seemed soothed through frequency, gestured by rotating his finger in the air that we would have to circle the block and try again. Again the anonymous voice recited the words, finding a poet's pleasure in their sounds and cadence, repeating them again and again, punctuated by static and honking and our driver sucking loudly through his teeth.

The sky darkened suddenly and then the rain poured down in a torrent. Within minutes, the streets were flowing like rivers. Motorcyclists fell; cars stalled. The few vehicles that were mobile sprayed a high fan of waves as windshield wipers fought uselessly against the onslaught. After seeking higher ground, street vendors huddled under plastic sheets and pieces of plywood. Abruptly, it ended and again the sun returned, blazing. The air was thick with mist and humidity. The catharsis was complete and for a time, the city smelled fresh and clean.

In contrast to the traffic, noise, heat and pollution of the city core, the Menteng region south of Freedom Square is a district of tree lined boulevards, foreign embassies, villas, and restored colonial mansions. Here, in the relative tranquillity of Jakarta's suburbs, is Jalan Surabaya, a street perhaps a half mile long that is lined on one side with over a hundred souk-like shops that are bursting with the chaotic clutter that brings joy to scrounging bargain hunters.

You will find intricately carved wooden statues, batik paintings, opium pipes, balance scales, masks, blow guns, chests inlaid with brass and silver, shadow puppets and old coins; you will find true antiques and replicas. You will be overwhelmed by the strange items that come from areas of Indonesia essentially untouched by modern civilization.

Haggling is necessary and although challenging, can be enjoyable as you interact with the shopkeepers, parrying preposterous initial prices with equally unrealistic offers. It is important that you raise your first price at least a little so that the vendor can save face and the sale can be finalized with a handshake and a feeling of bonhomie.

The shopkeepers manipulate their smattering of English in well practiced bursts; "Hello, Boss...Special price for you today, Boss...Look into my shop, Boss...." The rhythm of their litany is entrancing as they enact their various ploys honed by experience to elicit higher prices; "But Boss, this is very special wood imported from Kalimantan." They will beg and cajole and implore; "Please, Boss, make your price a little higher. Good for me, good for you."

One vendor, with an exaggerated clandestine air, nodded for me to move closer; as if he was going to share a secret, he leaned towards my ear and whispering behind his hand offered his lowest possible price, a gambit geared to give an impression that the price would cause him embarrassment should the other vendors learn how low he allowed his price to drop.

Across the street from the jam of shops, there are a few satay wagons and cold drink stalls. Here under the canopy of angsana trees, the vendors relax while awaiting buyers. Some play chess; others are vociferously involved in a domino type game that is played with much intensity and enthusiasm. The air hangs heavy with the aromatic smoke of kretek cigarettes, a uniquely Indonesian blend of tobacco and ground cloves. One vendor grinned hesitantly when seen aging metal replicas of antique irons with a propane torch.

Jakarta is a city that is perhaps best savored in retrospect, allowing time to temper its images before permitting their unreeling. Like the durian, Jakarta is an acquired taste.