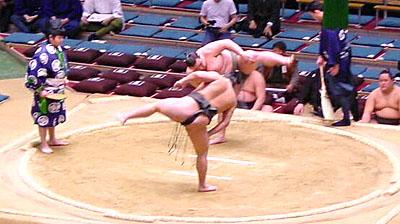 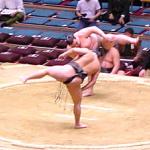 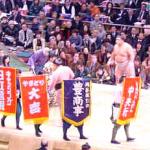 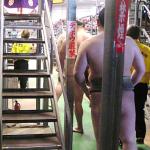 I went to see Sumo the other day. It took a lot of determination getting there but it was worth it.

Sumo and baseball are the national sports in Japan. Perhaps baseball is more popular, but Sumo with its ancient traditions and pageantry, resonates deeply in the Japanese soul.

Its not that everyone loves Sumo here, but even the people who claim not to like, still seem to know a lot about it.

There are 6 tournaments a year, 3 in Tokyo, one in Osaka, one in Nagoya, and one in Kyushu. The tournaments last 2 weeks. During this time the Sumo wrestlers have a match everyday.

Japan is very class conscious and in this sense Sumo reflects the society perfectly. Everybody, even the referees, have a rank. At the end of the 2-week period, each division has a champion.

His name (there are no women Sumo wrestlers at this time) is written at the top of a special scroll and then all the other Sumo's names are written afterwards in the order that they finished. So everyone knows their rank. As you go up in the ranks you pass through different divisions. The rank is reflected in the outfits that they wear, the way they wear their hair, and the movements they are allowed to make in the ring.

The Sumos live together in teams or stables. Perhaps most importantly, the higher ranked Sumos get to eat first in their stables. They always eat the same thing, a kind of soup called nabe. The more they can eat, the heavier they can get and then the more difficult they are to beat (move).

Since the tournament is only in Osaka, the big city closest to Kyoto, only once a year, these 2 weeks in March were my only chance to go. My boss called the arena and they said they were sold out except for 1 seat on Tuesday. I took it. However I had to go to Osaka on Saturday to buy the ticket. The train ride was about 1 1/2 hours each way and cost about $12 round trip. The ticket cost $67 dollars. But I was determined to see it, so I did whatever it took.

There are about 800 Sumo wrestlers right now. Most of them fight everyday. So there are a tremendous amount of matches. Most matches last only a few seconds. However like many things in life, we really do it for the anticipation and the memories. Sumo is perhaps the simplest of all sports. You merely have to push your opponent out of the 15 feet diameter ring or make him touch any part of his body other than his feet to the ground. However, if your opponent weighs 481 pounds, as does one of the 2 grand champions (yokozuna), Mushashimaru, maybe it's not so simple after all.

The lower ranked matches move along very fast. That's because they have to start wrestling as soon as they get into the ring. They face off and go down into a 4-point stance, kind of like what a football lineman does. As soon as all fists are on the ground, they go at each other full speed. There is a thud and then it starts. Like any sport there are intricacies. For example, there are 48 approved holds that you can use to throw your opponent. At the end of the tournament, in addition to the winner getting a trophy, anyone who beat one of the yokozuna gets a special award as well as the person who fought with the most style.

The higher ranked players get more time in the ring and they are allowed to perform certain movements. They do a kind of dance that looks like 2 birds in mating season. Then they go to their corners and grab some salt and throw it into the ring. This is said to purify the ring (in case the guy before them stunk it up maybe?) and drink a sip of water (also to purify).

Then they start slapping themselves all over real hard. Perhaps the most striking thing about them is the way they dress. They have this very thick belt around their waists (about the width of a minivan) and a piece of cloth the runs from the front along the gorge of their butts and connecting in the back. It sounds really gross doesn't it? But actually it wasn't gross. Of course I didn't look to closely (would you?) but after a while, I didn't even notice the thongs. In fact, almost everyone that I talked to (especially the women), said the same thing, "Sumos have really nice skin." The top Sumos are all very rich and are married to the most beautiful women in Japan. This and they get to eat as much as they like and have to actually work only minutes a day. What a job. There are some Sumos of other nationalities. There is an African/American/Japanese man who is highly ranked. Also there is an Argentinian/Japanese man. I wonder if I could be the first Jewish Sumo.

I arrived at the arena around 1:30 in time to watch some of the lower matches. Around 3 pm the higher ranked Sumos all paraded out and formed a circle on the stage dressed in their fighting outfits covered with a kind of colorful apron. Then they came out one from the east and one from the west and started to fight. By this time the arena started to fill up and the excitement was building. There was live TV coverage. The higher ranked referees came out. They were dressed in beautiful kimonos of the style of the Edo period (1600-1867).

The Sumos now had 4 minutes once they entered the ring to get going. This gave them time to do their bird dance (actually stomping to drive out evil spirits), throw salt on the ring a few times, and psyche out their opponents by delaying as long as possible. Each time they did this they would both have to go out of the ring and start all over. Then they would go down in their stance and bam it started. And bam it was over. You had to pay attention or you would miss it. After it was over they would go to their side of the ring, bow to one another and then the loser would sulk off and the winner would crouch down and get honored by the referee with a bow and a wave of the fan.

Most of the people were seated on the floor in little roped off areas big enough for 4 people. They sat on floor cushions, ate, drank tea, beer, and sake. I was sitting about as far away as it was possible to sit. However the box seats were sold only in sets of 4 and they went for about $400 for 4 seats. Most of them had been snatched up months ago.

The matches were fun to watch but kind of routine. Occasionally one of the Sumos would get thrown completely out of the raised ring. One of them got hurt and had to be helped off (by 3 attendants). One match however was different. Sometimes when they come out and they can't get a hold on the other one, they just start slapping one another. This is legal as long as you use an open hand. But really even if it is an open hand and that hand belongs to a 350 pound Sumo it's going to hurt.

This one Sumo got slapped and started bleeding profusely from the nose. They didn't stop the match though. I guess they were about evenly matched because they got in a deadlock and neither could push the other. They stayed locked like that for about 10 minutes. They looked like 2 dogs in heat. Occasionally one would move a little and you thought something was going to happen. But nothing happened. All the while the blood was flowing all over the place and the nice Sumo skin was turning red. Finally the referee stopped the match and the 2 wrestlers went back to their corners for a few minutes. The bleeding was stopped and then the match was continued where it left off. In the end the bleeder lost. Each fighter got a large round of applause.

The tension was mounting as people were waiting for the final 2 matches, the Yokozuna or grand champions. There are now 2 active grand champions, one of them is Hawaiian. As I waited, sometimes I would walk around the arena to see the fights from a different angle. You could go down to the ground floor where the fighters entered and waited for their turn to fight. However you weren't supposed to hang around there or take pictures.

But, I thought, what the hell, this is my only chance to see Sumos. So I walked down there and pretended that I had a seat that I was walking to. I stepped back and stood along the wall. I wanted to get a good picture of the 5 or 6 Sumos lined up waiting to get to the ring like jets lined up in the sky at an overcrowded airport waiting to land.

I heard a loud thump. I wheeled around and there standing in the corner was the largest man I have ever seen. He was about the size of a toilet stall and I felt one thing, fear. This man was like a bull and I was intruding on his space (not a difficult thing to do considering his size.) The man didn't look at me but I felt that he knew I was there and he didn't like it. One of the managers hurried over to me and let me know in no uncertain terms that I should go to my seat at once. I didn't argue. I got to my seat in time to see that man in the ring. He was an animal. He picked his 300-pound opponent up completely and threw him out of the ring. I was glad that I had left when I had.

Finally it was time of the Yokozunas to fight. The excitement of the hall was at a fever pitch. The Hawaiian dwarfed his opponent and had a bored look in his eyes. The 2 men squared off and got up a number of times and then they started for real.

They came together with a thunder. The smaller man held his own. It was hard to tell who the crowd was for. They tugged and grunted, the huge Sumo had rhino legs and he leaned his weight into the smaller man. He bore down on him. Then suddenly the smaller man swung around quickly and twisted the Yokozuna around until he lost his balance and fell to the ground. The crowd went wild.

This was an unusual event for a Yokozuna to lose. The people started to throw their seat cushions into the ring. It reminded me a 7th inning stretch of a Japanese baseball game. It was orchestrated pandemonium. This is the accepted way to show your excitement when this happens. After a few minutes the place settled down and the 2nd yokozuna came out. Amazingly he also lost. Again the cushions flew. People were talking about what an amazing day this had been because they couldn't remember the last time both champions had lost in the same day. So I guess I was lucky to see such an exciting Sumo day. Now we are into the 12th day of the tournament and I am hooked on Sumo. I watch the highlights on TV every night and I can't wait to see who will win. As far as changing my profession, I think maybe I'll wait until my next life and maybe if I'm born into a Japanese family with large bones, I will think about becoming a Sumo wrestler.