Surf's up as Hong Kong catches the wave 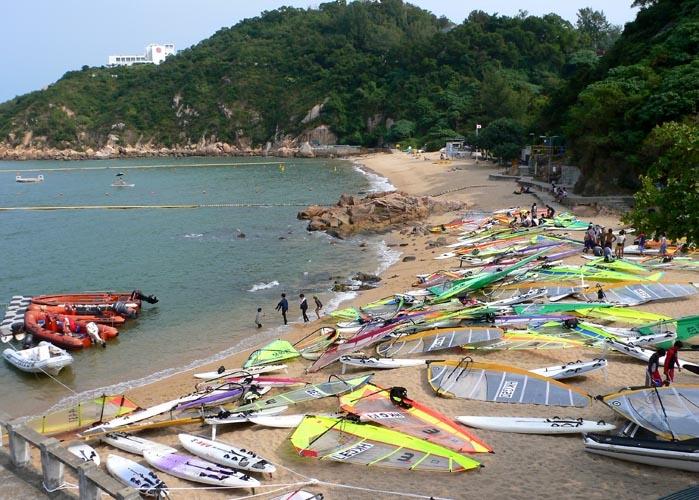 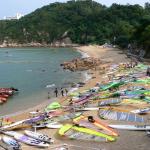 Hong Kong, December 2006 - The laid-back beach lifestyle seems light years from bustling Hong Kong but just a few miles from the city centre, an isolated beach is attracting a small but growing band of surfing enthusiasts.

On a recent Sunday afternoon, 60 surfers took on the swells of the South China Sea for top honours in Hong Kong's top annual amateur surfing competition.

"Every year we get more and more people taking part," said Ken Choi, organizer of the third Rip Curl Cup.

The kilometre-long (half-mile) Tai Long Wan beach in Sai Kung country park is accessible only by helicopter, boat or a rocky 45-minute trek from the nearest road.

"I reckon this is the best surfing spot in Hong Kong," said Choi, a 1982 Asian Games windsurfing bronze medallist and representative in the 1984 Olympics.

The competition in the southern Chinese territory attracted an international field, including surfers from the United States, Japan and Brazil.

One quarter-finalist in the Cup Challenge event, Bill Lee Chung Bin, estimates there are around 300 keen surfers in Hong Kong, most of them locals who are reluctant to compete.

"Maybe their technique is not quite good enough, or they're just shy. Chinese culture doesn't want you to show off in front of many people," he said.

Choi agrees there is less of an emphasis on competition in the local scene, noting: "I think (the locals) just want to surf and enjoy, not compete."

Surfing for both Chinese and expatriates was nearly banned in Hong Kong less than 10 years ago, when bathers objecting to surfboards lobbied the authorities.

Wanda Kennedy, an Australian veteran of Hong Kong waters, explained how the surfing community formed the Hong Kong Surfing Association in 1997 to fight the moves to evict them.

"Li Lai San had just won her gold medal," Kennedy said. "How did we know we didn't have a champion surfer?"

The argument was ultimately a persuasive one, and surfing remained legitimate.

For the past four years Kennedy has rented a small hut in Ham Tin village, a tiny hamlet tucked behind a headland on the edge of Tai Long Wan, which she visits every weekend for the waves.

"There are good opportunities, a good lifestyle here," she said. "You can live a quiet life or a busy life in Hong Kong. It's your choice."

Grant Robinson, head judge at the recent competition, says for the young people of Hong Kong, surfing offers "a lifestyle outside the mainstream -- plus, it's a sport that's very individual."

Robinson says Hong Kong beaches, which offer three to six-foot (one to two-metre) waves that can surge to 15 feet during a typhoon, compare favourably to those in other surfing hotspots.

"When it's good, it's as good as any beach break in Australia or America," he said.

But Choi says surfing is about much more than the waves for Hong Kongers -- the whole surfing scene with its designer gear is attractive in this style-obsessed city.

"It looks cool," he said. "This is why all the youngsters love it."
Now a new generation of Hong Kong surfers is on the rise.

"My mother didn't let me go surfing when I was a teenager," says Lee, who is from the sixth generation of a prominent south Hong Kong village family.
"Every time a typhoon came, she locked my surfboard in the storeroom. But I broke in."

Now Lee encourages his six-year-old daughter Chelsea and five-year-old son Marron to get involved in all kinds of sports. He says he doesn't mind if they don't take up surfing, "but for sure they will love the water".

Robinson is confident there will soon be more Chinese surfers in local competitions.

And Lee suggests the breakthrough will be made when hometown enthusiasts -- or more likely their children -- take up the challenge of competitions like the Rip Curl Cup.

"If you want to be good you have to be more international, more with an open mind. Share information, share technique," he said. "Then you can improve."