In Taiwan, baseball is the beautiful game - and cultural glue 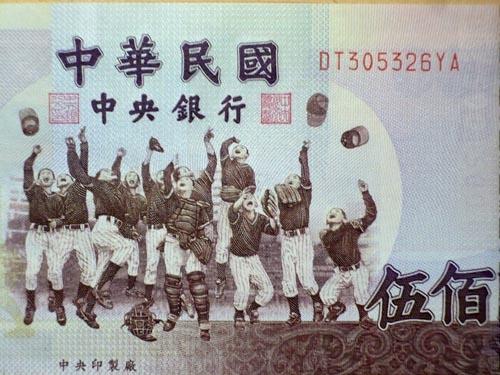 Detail of a Taiwanese 500 dollar bill. 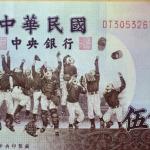 In Taiwan, 500-dollar bills carry the image of Little League baseball players in a moment of glory. That's how serious the island is about its favourite game.

At a time when Taiwan's professional baseball elite is shaken by game-fixing allegations, the island of 23 million stays devoted to its most popular sport because it is much more than just a pastime.

"Baseball is an important part of Taiwanese identity. People are proud of their baseball," said Scott Simon, an anthropologist at the University of Ottawa who has done extensive research in Taiwan.

Taiwan is a highly diverse society -- people speak one of three vastly different dialects at home -- but collective memories about baseball form part of the glue that holds it together.

"I remember when I was a little girl, perhaps five or six years old," said Candy Lin, now 40, about the 1970s heyday of the island's participation in the Little League, a US-based organisation that brings together players aged five to 18 from across the world for tournaments.

"When they were playing overseas, we'd get up in the middle of the night because of the time difference to watch our heroes live on TV."

Taiwan is not recognised by the vast majority of nations due to China's efforts to isolate it internationally, and in this situation baseball is a crucial way to make its presence known.

The theory is that no society that can win the Little League World Series 16 times can be a nonentity as claimed by Beijing, which considers the island part of its territory and wants it back.

The island split off from the mainland at the end of a civil war in 1949, and one of the darkest moments in the decades that followed came in 1971, when it was forced to hand over its seat in the United Nations to China.

"Whenever Taiwan won the Little League, it meant enormous national confidence," said Yu, who has written a book about the history of baseball in Taiwan.

When Taiwan was first introduced to baseball in the early 20th Century, it was not a direct import from the United States but came via Japanese colonisers.

The Japanese departed at the end of World War II in 1945, but they left behind baseball, much the way the British made cricket one of their lasting legacies in South Asia.

China's Nationalists, who took over from the Japanese, were eager to eradicate most vestiges of the colonial period but soon gave up on baseball, finding it too firmly rooted in the island's soil.

Even so, the lukewarm mainland attitude to the sport is reflected in the family backgrounds of most elite players even today.

"The majority of baseball players are Taiwanese, not descendants of people from the mainland (who fled to the island in the late 1940s)," said Yu.

Baseball underlines the differences between Taiwan and the mainland, unlike the other globally successful American sport, basketball.

"Baseball is especially Taiwanese. Basketball is the opposite, because it's also a big sport in the mainland. Basketball creates a commonality," said Simon.

For all its popularity, Taiwanese baseball has had a tumultuous history, and the suspected game-fixing driven by high stakes illegal gambling now rattling the sport is just the latest in a series of scandals.

Prosecutors last month began investigations into alleged game-fixing in Taiwan's professional league, the fifth time that a scandal of this type has emerged.

At least a dozen players have been named as defendants, while reports have pointed to links with notorious members of the island's criminal underworld.

A legalised sports lottery began in May last year and sales reached nearly eight billion Taiwan dollars (247 million US dollars) from January to July this year -- with 60 percent of that accounted for by baseball.

A scandal that erupted in 1996, the worst in the history of the sport here, led to the disbanding of the China Times Eagles.

Despite the wave of bad news, observers believe the sport still has a future in Taiwan, citing the way it continues to attract genuine enthusiasm at the grassroots level.

"You see townships organise baseball games for the villages. Everyone loves it. It brings the communities together in a meaningful way," Simon said.