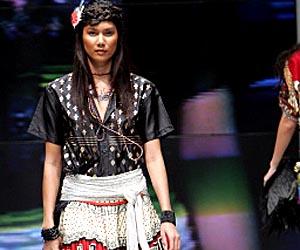 A model presents an outfit designed by Thai designer Medium-Rare as she walks the ramp at the Bangkok Fashion Week 2005, at Queens Sirikit Conventional Center in Bangkok. 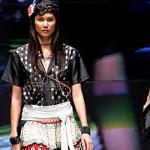 BANGKOK, Aug 17, 2005 - Thai fashion is more than just cheap silk and brand-name imitations, a group of designers from the kingdom hope to show the world.

Under a catwalk set up inside a white inflatable dome built on a lake in suburban Bangkok, models were to begin strutting out on Thursday at Thailand's inaugural fashion week event.

The 35 shows will feature original creations by 40 designers including locally well-known names like Metta Tantisajjatham and Chanita Preechawitayakul, who have already found some success overseas.

Running until Sunday, the event will also host runway shows at the Queen Sirikit Convention Centre and trade fairs promoting textiles and jewellery.

The fashion week event is part of a joint government-private effort known as "Bangkok Fashion City" that aims to put Bangkok among the world's fashion elite.

The government has given 1.8 billion baht (44.1 million dollars) and the private sector 488 million baht towards the project which organisers have said includes the creation of a fashion school at Bangkok's Chulalongkorn University.

"But if you don't walk forward, everybody will walk past our neighbours and accept them and we'll be left behind."

The week is also about combating the wide perception of Thai fashion being only Thai silk and cotton and imitation designs, added Tinakorn -- dressed in blue jeans and a white pin striped black jacket with black cloth flower and crocodile skin boots.

"We have a bunch of Thai designers who have brand identities, who have capabilities in production, and also have their own original designs," Tinakorn said.

The week will focus on this group, and aims to put more lines such as Chanita's Senada -- whom Tinakorn said he was proud to see in Los Angeles -- on overseas racks.

"The main concept of this event is we want to create the biggest fashion event ever in Thailand," Winai Chairakpong, executive creative director for the fashion week, said.

"We think it's time that Thai fashion should speak out louder to the fashion world."

Chaichon Savantrat, who has 21 years' experience and produces the Muse and Good Mixer brands for men and women, said he will show clothing inspired by Scotland's Loch Ness monster.

"Nobody knows what the monster looks like, but we each have our own idea about it," he said. "So just wait and see the show, because it will be mysterious."

Metta Tantisajjatham has spent almost 14 years in the design business and operates three boutiques of couture and ready-to-wear clothes in Bangkok under her Metta brand. She said she is ready to try cracking international markets again.

She tried once, in Paris two years ago at an exhibition, but said she believed her production quality was not ready because she was busy with her Thai uniform line that outfitted banks and hotel staff.

While used to mass production lines, Thai factories found it very difficult to produce the quality required for the export of high-end fashion by Thai designers, Metta said.

She regularly sent her own people to factories to teach staff "cutting, detailing, everything," she said.

"But this time, the government has tried to help them by sending expert people to develop the factories."

Metta, who prefers working with cotton, linen and Thai silk, sells about 20 million baht (48,900 dollars) worth of clothing annually. She said she will target Asian markets before trying further afield.

While she and others are seeking to raise the global profile of Thai design, Metta said it would still be some time before Thai designers are envied enough for counterfeiters to start producing knock-offs of their products.

"For Thai brands, maybe it's not worth it for them to do fake ones," she said. "It's only the beginning."