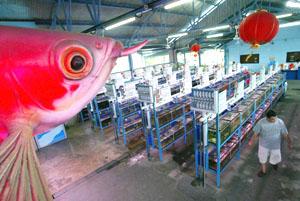 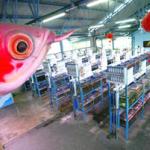 Few people would consider his business glamorous but Kenny Yap, Singapore's king of ornamental fish breeders, is not bothered at all because he has struck gold.

Last year, when many Singaporean companies were still struggling to shake off the island's 2001 recession, Yap's Qian Hu Corp posted an 84 percent jump in net profits of 3.82 million US dollars. Total sales for the publicly listed ornamental fish breeding company, whose specialty is the highly prized Dragon Fish, came in at 36.24 million dollars, a 52 percent surge from 2001.

Singapore is regarded as the export capital of ornamental fish, accounting for 30 percent of the world's supply. By the time the fish make it to household aquariums, the industry's annual value worldwide is estimated at more than 4.5 billion dollars.

On the same day that its 2002 earnings was released, Qian Hu also announced it was paying 4.45 million dollars for a 65 percent stake in Malaysian fish breeder Kim Kang Aquaculture. Qian Hu, which means 1,000 lakes in Mandarin, now has subsidiaries in China, Thailand and Taiwan.

The acquisition is part of 37-year-old Yap's bold ambitions to tap what he sees as a growing demand for lifestyle products as Asia's pool of middle class families increases in line with improved living standards.

"You need to take care of a few fundamental things first. Your food, your TV sets, your fridge, your washing machines," said Yap, Qian Hu's executive chairman and managing director. "Once you have done that, you come to enhance your life. This is a lifestyle product," Yap told AFP. According to Yap, ornamental fish are the world's most popular pets and caring for fish is the second most popular hobby after photography.

While Singapore will remain an important research and training hub for Qian Hu, Yap wants income from foreign markets to eventually overtake that of the island simply because of the huge consumer base in other countries. In the region, Yap has set his sights on China, Malaysia and Thailand.

"Singapore is still extremely important. It is the export center for ornamental fish," Yap said. "But all our overseas subsidiaries' mission is quite simple: to be bigger and better than Singapore's operations," he said.

China, in particular, is a "very exciting country," Yap said, referring to the explosion of middle-class and upper-middle-class families there as the economy of the world's most populous country continues to grow at a sizzling rate. "The biggest growth is in China," Yap said. "Last year, China created the most wealth to its people in the world so they created a big chunk of middle class," he said.

From Qian Hu's 2002 performance, it looks like Yap is on track to realising his goal. Of the 36.24 million dollars in sales earned last year, 45 percent came from outside of Singapore. Asia accounted for 12.77 million dollars of overall sales while Europe contributed 2.65 million dollars.

Apart from a shrewd expansion strategy, Asians' love affair with fish, especially among businessmen, has turned out to be a blessing and has proven to be immune to economic slumps, Yap said. "It's relatively recession-proof for many reasons," said Yap. "Most of the time (during bad times), they turn to geomancy and the geomancer will advise them to keep fish as keeping fish gives two good elements in our Asian culture," Yap said.

Fish represent wealth and surplus and it is not unusual to find many homes and offices in Asia, especially those belonging to ethnic Chinese, decorated with live ornamental fish as a way of enhancing one's harmony with the surroundings. The Dragon Fish, also known as Asian Arowana, is highly prized among Chinese entreprenuers who see it as a symbol of luck, wealth and prosperity. They can cost as much as 5,780 dollars each depending on the size and a special license must be obtained from the world governing body to breed the fish as they are officially endangered.

Yet Yap, who has won accolades for turning around his family's ailing business which initially bred freshwater guppy fish, is not content to rest on his laurels. "Every year, I want to treat it as a new beginning," he said. "What we can do is beyond my lifetime. I do not want 10 big customers. I want 10,000 small customers," Yap said.