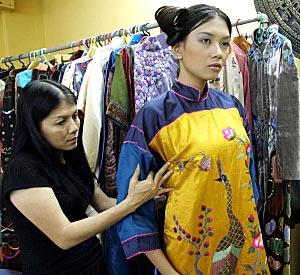 Designer Dang Thi Minh Hanh checks one of her creations with a model at her studio in Ho Chi Minh City, Vietnam. 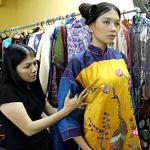 HO CHI MINH CITY, Aug 1, 2005 - When Anh Thu, a tall woman with black-rimmed glasses, walks into a designer boutique to choose a wedding outfit she knows exactly what she wants -- something bright.

Trying on a blood red silk rose-embroidered top, the 25-year-old secretary for a trading company in Ho Chi Minh City, says sedate hues would not be fitting for her big day.

"The style of the collection here is suited to my Vietnamese taste," she says.

Thu's fashion sense may stand out in this traditionally staid communist country but it lights the way ahead for Vietnam's fledgling fashion industry, both domestically and if it is to attempt to make its mark in the global market for haute couture.

The emerging industry is concentrated around Ho Chi Minh City with its growing population of trendy and relatively affluent urbanites.

Critics say most designers here simply copy or improvise Western and Chinese patterns. But a band of young designers in the southern business capital is seeking to assert a separate identity with works partly inspired by Vietnamese traditions that are catching the eye of foreign designers.

Nguyen Quoc Binh, 25, the designer and owner of the "QB Mode" boutique helps Thu tuck in a long, orange-coloured cloth beneath the top and lets it cascade in front of her.

The fabric will be turned into an ankle-length skirt and acquire some pink, blue and purple layers, setting Thu back 300 dollars.

In between attending to her customer, Binh tells AFP: "I like to mix many colours because I want to have fun and create the image of a happy life."

After nearly two decades of economic reforms and rising affluence, fun and a happy life are becoming affordable for many Vietnamese people.

"People have so far been used to wearing something that lasts long, synthetic fabrics," says Nguyen Kieu Thu, a prominent make up artist in the fashion industry.

"Now the living standards are upgraded and people care about what they wear. It is a good sign for fashion. They realise that silk or cotton or linen is good and they begin to use many different kinds of material and colours.

"But I think fashion in Vietnam is too young compared with other countries," she says.

Binh's design and those of another young designer, Nguyen Trong Nguyen, were recently displayed at a show in Hanoi which also featured Italian fashion company Erreuno.

The show was overseen by Dang Thi Minh Hanh, director of the Ho Chi Minh City-based Fashion Design Institute, who has had her works displayed on catwalks abroad.

Erreuno designer Sonia Speciale was impressed with what she saw.

"They are ready to be exported," Speciale says of the collections presented by Binh and Nguyen. "The only thing is that in order to be exported they have to have a proper organisation and a proper base of people working for them to get the best they want. But at this point, they can be exported, no problem."

Speciale marvels at the colour schemes preferred by Binh and Nguyen.

"What struck me was the eccentricity, especially for the skirts, they were using textiles which were like raw silk..."

The outfits the designers presented at the show are aimed at special evenings or parties and bring into play the tradition of embroidery and needlework in Vietnam.

"There were a good series of outfits which had orange and red as colours and it really struck me because it reminded me of fire," she says.

Nguyen, 27, has an approach similar to that of Binh.

Minh Hanh agrees with Speciale that Vietnam is producing talent and believes the potential is there for rapid growth.

She wants a three-pronged approach to boost the industry -- train designers, educate people about fashion and promote greater exchanges between Vietnamese and foreigners in the field.

"I think young designers have rich ideas ... they use a lot of embroidery and Vietnamese silk, it is very good but they don't have the basics of fashion techniques," Minh Hanh says.

Vietnamese people are unfamiliar with the concept of fashion and have little access to fashion magazines, books and academic courses, she says.

"We have a lot of factories which can make very good quality products but they don't have the designs. I think if we have more and more young designers, who have learned the basics of fashion, I think Vietnamese fashion industry will grow rapidly."

Thu, the make up expert, calls for greater maturity.

"The colour schemes are good on the catwalk, in fashion shows, but we should seek harmony with global fashion trends. In real life people like more subtle, more classical, more elegant colours."

But she shares Minh Hanh's optimism for the industry.