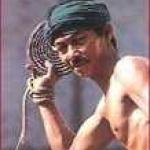 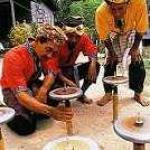 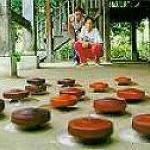 Malaysia is a land of many cultures and traditions. Over the years, many traditional games took its form. One of the favorites has got to be the gasing. A direct translation of gasing from the Malay language to English literally means, "tops". The spinning of tops is a very popular traditional game especially amongst the villagers in the state of Kelantan and Malacca. Each season after the rice harvest, several villagers will come together to challenge each other in an ultimate test of skills. It is also during this time that you'll find many people, tourists and supporters alike, coming to the villages by the busload to cheer for their representatives.

A top-spinning contest is basically a friendly game. There are two kinds of matches. The first is the "spinning contest" and the second one is called the "striking match". In the "spinning contest", the one who can spin his top for the longest time wins the match. Once the top has been launched, the top is carefully scooped off the ground using a thin wooden bat. It will then be transferred to a little wooden post with a metal surface and left to spin for as long as possible. The trick here is to ensure that the top doesn't topple during the transit. Tough as it may seem and unbelievably so, the current record stands at two hours! The "striking match" is far more exciting than the first. At least you won't need to stand there for hours watching a top spin and spin and spin. The "striking match" is as the name suggests. Each contestant must try to hit their opponent's tops so that the already spinning tops will topple and loses its balance and speed. It's quite an interesting spectacle.

Main gasing or giant top spinning is more of a game for adults than children. The ones used by adults are much bigger in size and can spin for a longer period of time whereas the ones played by kids are much smaller. This ever-popular game is also a man's game as strength is an essence here. Gasing is split into two categories - one is for ornamental purposes while the other is for playing. Erase your mind from the general perception of a gasing. There are actually five different shapes of gasing found in this country, namely the plate-shaped, heart-shaped, flat-top, egg-shaped and berembang-shaped. Berembang is a fruit of a seaside tree. And from these designs come the material used for the making of a gasing. The gasing is made out of wood, iron and lead. One of those huge tops from the state of Kelantan actually weighs about 4 to 5 kilograms while a smaller top is about 0.1 to 0.5 kilograms. The big guys can come up to the size of a dinner plate. Do you also know that by driving a nail into the bottom of a guava fruit, you can have your own gasing within minutes? Well, the answer is yes. It is not difficult to come up with a makeshift top but a true professional one requires skills.

Although it may not be that easy to come up with a winning top, you can try your hand at spinning a top. Now, that's easier said that done but nonetheless, nothing is impossible! To make a spin, you need to first use a string, coiling it at the top part of the gasing. Next, hold the gasing with one hand ensuring the string coil is facing upwards. You need to tighten the other end of the string on your wrist. Then, get into a standing position and throw the gasing toward the floor. Quickly pull the string backwards to generate the spinning effect. To be able to spin well will take quite an amount of skill, timing and strength.

If you're a tourist and is interested in watching a few rounds of top spinning matches, you can come over to Bandar Hilir (Hilir Town). You'll find either a demonstration or contests at the gasing playground each weekend at this town. It has proven to be quite an attraction for gasing lovers and passersby. Top spinning is almost like a magical performance. To watch someone make that perfect spin with strength and skill is something not to be missed!