White is beautiful in Vietnam 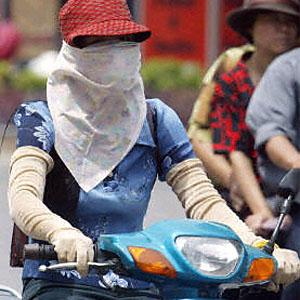 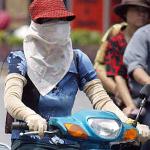 White is beautiful. Or at least it is in Vietnam where skin-whitening creams sell like hot cakes and women wrap themselves up like mummies whenever they venture outside. Arm-length gloves made of a combination of lycra and cotton are essential accessories for women across the country as they zip around city streets on their motorbikes. Hat, sunglasses and a colourful handkerchief tied gangster-style across the face complete an outfit fashioned to beat the skin-browning rays of the tropical sun.

Today, as has been the case for centuries, beauty in the minds of most Vietnamese woman means white skin -- a symbol of femininity, pureness, sophistication and high social class. Dark skin, on the other hand, still conjures up images of poverty and peasants toiling in paddy fields, exposed to the unforgiving elements.

"I want my skin to be white because I think it is beautiful," said Dang Thi Ngoc Nga, a 31-year-old office worker at a state-run company in Ho Chi Minh City. "But I also want to protect myself from the from the sun and its ultra-violet rays which are dangerous," she added before zooming off on her scooter at a busy intersection in the southern business capital.

Since the late 1990s, middle-class women throughout Vietnam have adopted similar protective measures as rising household incomes enable them to spend more time and money on their personal appearance. More recently, government warnings about skin cancer and the exponential rise in pollution levels due to the millions of motorbikes on the roads have further encouraged the trend to cover-up every inch of exposed flesh.

But Vietnamese women are not alone in their desire to achieve a perfectly white complexion. Throughout Asia, from Japan to India, pale skin is considered a sign of beauty. Indeed, skin considered too dark can often be enough to derail potential suitors in arranged marriages among middle-class families on the Indian sub-continent.

Kim Loan, director of the Japanese-owned Chao Spa salon in Ho Chi Minh City, says the desire for white skin has yet to be affected by the country's rapid exposure to western culture and fashions. "In Europe and other western countries, tanned skin is considered healthy, beautiful and a sign of expensive living, but here most people still want to have white skin," she said.

Even for those fortunate enough to have access to a swimming pool, heat-relieving dips are unthinkable until the sun has begun its late afternoon descent. There are, however, signs of change.

In trendy cafes and bars in Vietnam's fashion-setting metropolis, some women are turning heads with their dyed blonde hair, and golden tans. Tran My Hanh, a 24-year-old amateur model and fashion shop owner, recently died her hair back to a more conservative brown colour from a daring honey blonde. But her skin remains tanned.

"We women all like to have a fair complexion, and that in Vietnam means white skin. But these days there are more and more girls with tanned skin like me. It is not because we don't like white skin, but because it is easier to get brown than white," she said. "I had to choose between off-white skin that looked unhealthy and tanned skin which I think looks healthy. I much prefer being tanned."

But she concedes there is a fashion statement to be made too. "It is stylish to be different, and besides, Westerners like it."