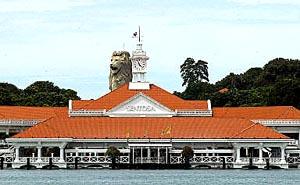 Sentosa, a resort island in Singapore plans to open the world's first restaurant allowing diners a view of wildlife, including lions, as a permanent part of the dining environment. 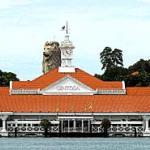 A resort island in Singapore plans to open the world's first restaurant allowing diners a view of wildlife, including lions, as a permanent part of the dining environment, its management said Thursday.

Wildlife will not feature on the menu, however.

Rimba Sentosa will cost 15 million Singapore dollars (8.57 million US) to develop and is billed as a "three-in-one lifestyle hub" where visitors can eat and shop. They may also encounter wildlife up close, or from a safe distance.

Sentosa island already has beach, golf and spa facilities as well as an aquarium and mini theme parks.

Rimba Sentosa will be located in a lush four-hectare (10-acre) plot nestled on the edge of the island's green belt. It is expected to open by July 2004 and will target affluent consumers with a pro-environment theme.

"It is a convenient jungle retreat where people can uproot themselves from city life and plant themselves in the midst of nature to soak up food for the soul," said Rimba's chief executive officer Bernard Harrison, who was responsible for the development of the renowned Singapore Zoo. "It also showcases the fragility of the forest, and we can and should be mindful of the environment when going about our everyday lives," he added.

Visitors will experience primal sights, sounds and smells in Rimba -- which means "deep forest" in Malay -- as they dine in an air-conditioned restaurant or various al fresco areas. The menu will be dominated by barbecued dishes. The attraction will feature 2,000 trees and house 500 animals from all over the world, including lions, cheetahs and gibbons, in an open-concept environment where visitors can see them from across a lake or behind a glass barrier.

Rimba Sentosa wants to promote conservation and its staff will receive at least a month of training about the animals and their habitat. Diners can also choose to donate service charges to local and regional conservation funds. "It is about empowering the individual... knowing that it will have a direct impact on the environment and the animals they want to save," Harrison said.

The attraction is part of a plan aimed at rejuvenating the resort island, which is gradually seeing the return of visitors after the Severe Acute Respiratory Syndrome (SARS) epidemic ravaged the city-state's tourism industry earlier this year.