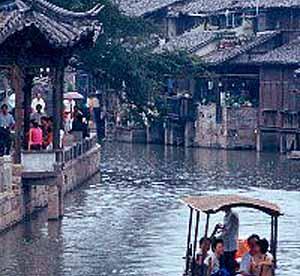 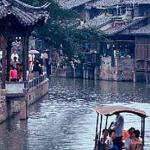 In the tranquil little village of Wuzhen, the light hangs over the Dong Shi River in a soft summer pallour, as though the clouds are making a deliberate effort to protect the residents from sunburn. Along the river, a select group of day-trippers enjoy a cruise aboard a pole-steered barge. I'm highly privileged to be visiting the very last of China's ancient "water towns" to be opened to visitors.

When the authorities opened the 1,300 year old riverine settlement of Wuzhen to visitors in early 2001, they were determined to avoid the tacky mix of tourist restaurants and kitsch souvenir shops that has swamped other estuary towns such as Zhouzhuang (which also lies in the Yangtze River delta). Wuzhen's old buildings, an architectural symphony of stone, wood and tiles, have been preserved rather than restored, and lovingly maintained rather than tarted up. The result is a place that is a sheer joy to explore on foot.

At first, it was as though the authorities gave a town and nobody came. But as word has gotten around, the initial trickle of visitors has now swollen to become a torrent (particularly at weekends). But like the river itself, the steady stream of guests flows gently through the town and then quietly departs.

Wuzhen is still a living town, where daily life goes on life goes on as it has for the last thousand or so years. Coppersmiths, wood-carver and silk-spinners work at their age-old crafts. Bicycle rickshaw drivers exchange stories as they wait for passengers. People cart water, cook meals, and tend their gardens, each flower-plot the size of a postage stamp.

The townsfolk of Wuzhen gather in the town square around mid-day - talking, smoking or playing mah-jongg. They seem laidback and contented. Most of all, they seem to enjoy observing the passing parade, which provides a constant source of amusement. I started to wonder whether it was the town or the strange foreign visitors like myself that was the main attraction. Western visitors are still a rarity here.

Wuzhen lies in the far north-east of Zhejiang province, about 90 minutes by road from Shanghai. The name "water town" is especially apt; besides lying on the Grand Canal, the settlement is completely encircled by two rivers - the Dong Shi and a smaller tributary, which meet at a T-junction. No matter where you stand, water provides the backdrop, the raison d'être of the whole town.

About 250 families used to live in the old quarter of Wuzhen. However, following the "restoration" of the town, many townsfolk have been moved out to the "new" Wuzhen, an attractively landscaped but otherwise characterless apartment block 15 km down the road towards Shanghai. Those who remain are mainly the elderly and craftspeople. While I was assured that there is nothing to stop new residents moving into the old town, young people nowadays seem strangely absent.

Among the craftspeople working in the village, one who stands out is an old lady who sits patiently all day long. spinning silk from a seemingly endless supply of freshly-boiled cocoons. Opposite her workshop, a fabric workshop produces block-printed blue-and-white banners, which flutter in the wind like long flags.

The old wooden shops of Wuzhen look ageless and immovable, as though their timbers have totally defied the ravages of time. At first, one suspects that the custodians of the town have tried to cover up the decomposing processes of nature. But look more closely and you find slow rot setting in around the bases of the doorframes, and splinters breaking away from the lintels. What little restoration has been done is so inconspicuous as to be totally indistinguishable from the original.

All the buildings in Wuzhen are in Ming or Qing Dynasty style. One palatial establishment is the "Double Happiness" Marriage Shrine. Twin hearts are joined in a nouveau-Chinese character in gilt upon a flaming crimson background, presumably depicting the inseparability of marriage - perhaps the Chinese know something that we Westerners don't.

Wuzhen also has some unique attractions, including Yu Liuliang's Coin and Paper Money Exhibition. Nearby (would you believe) stands a Pawnshop Museum, as if to prove that usury is universal. (Maybe fortunately, Wuzhen has the only such establishment I've ever come across). I tried looking for a Qing Dynasty DVD player in the pawnshop, but was sadly disappointed.

No fewer than eight stone bridges cross the Dong Shi River, the grandest of them being the Fengyuan Double Bridge. The bridge is separated into two parts by a wooden sluice gate. Cyclists carry their bikes across the high arches of the bridges, which are designed to let boats pass underneath without difficulty.

Maybe the finest building in old Wuzhen is the "Water Pavilion", built on a wooden platform atop stone pilings sunk into the riverbed. The Pavilion overlooks the Grand Canal, that magnificent waterway running a full 1800 km from Beijing to Hangzhou. While parts of the Canal north of the Yangtze River are now silted up, the 500 km section on which Wuzhen is situated is still in continual use, with a constant stream of barges carting wood-chips, building material, passengers and other cargoes.

Back in the main square, the elders are still hanging out. On the village stage, a performance of Peking Opera is underway. Across the square, a master puppeteer entertains visitors with a shadow-play of the type known in Java as wayang kulit. But while the Javanese version of shadow puppetry is subtle and refined, the Wuzhen style has the protagonists attacking each other with the ferocity of tigers.

It is hard to leave Wuzhen. As the evening mists start to roll in across the town, the lights go on. A luminescent glow hangs over the river, like a torchlight shining through a glass of buttermilk.

Whether by accident or design, this town seems to have been dropped into its watery setting by a master town planner from another galaxy. A more perfect location for a settlement would be difficult to find. It is fervently to be hoped that tourism will augment rather than destroy the unique ambiance of Wuzhen.

Getting There: Wuzhen is in the north-east of Zhejiang Province, about 90 minutes by road from Shanghai. Shanghai Tourists Centre (3200 Xietu Lu, near Shanghai Stadium, tel +86 21 6626 5555) has a daily tour bus to Wuzhen. The bus leaves around 8 am (seasonal: check exact timings) and returns by 6 pm. Alternately, take the bus or train to Jiaxing (90 km from Shanghai), from where a minibus connects to Wuzhen.