31-year-old Bangladeshi 'professional traveller' and anti-drugs activist Mohammed Ashrafuz Zaman has cycled around the globe for seven years, and now he is tackling Southeast Asia on foot. 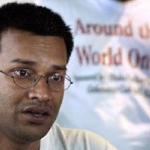 Singapore, April 22, 2004 - For seven years Bangladeshi "professional traveller" and anti-drugs activist Mohammed Ashrafuz Zaman has cycled around the globe, and now he is tackling Southeast Asia on foot.

The 31-year-old Dhaka native arrived in Singapore two weeks ago from his homeland for a stroll around the island-state and flew Wednesday to Bangkok, from where he will walk through Thailand, Cambodia, Laos and Vietnam.

"I want to explore all the different kinds of travelling. And since this region is quite small, I thought maybe I should walk," Zaman said casually when asked why he decided to give up his bike and pound the pavement.

Zaman has so far cycled around 44 countries since 1997 to spread his anti-drugs slogan: "Unity, Strength, Love... No Drugs."

He got the idea to merge his two passions for travel and activism from his work with the Young Tourist Club of Bangladesh, which promotes environmental awareness, drug abuse prevention and travel.

"When I got involved with the Young Tourist Club in my country, I felt an interest in drug abuse prevention, so I thought, why not carry the message," he said.

Zaman meets with volunteer organisations and anti-narcotics associations in every country he visits to share knowledge and experiences and broadcast his message.

"Usually these organisations have their own publication or newspaper, so it makes it easier for me to spread my message through them," he said.

He also visits the local branches of French cultural organisation Alliance Francaise, which help him with finances and accommodation and give him contacts who can help him with his campaign.

For someone who travels with only two pens, a notebook, a few t-shirts and a camera in his bag, the handouts are a necessity. With no regular work to support himself, he has to be extremely thrifty.

Before visiting a country, he searches on the Internet for the cheapest accommodation there. Sometimes he stays in the homes of Bangladeshi expatriates or immigrants whom he meets through the embassy.

"Before I came here I was recommended these places," he said, showing a list of budget hostels in Singapore charging seven to 10 Singapore dollars (four to six US) a night.

"But these were not in my price range, so I found a Bangladeshi community guest house here and I'm paying five dollars a night."

Zaman says travelling around the world after the September 11 terrorist attacks on the United States has become more difficult, especially trying to pass through border checkpoints.

"I was travelling before 9/11, and I am travelling now, so I can compare. Being a Muslim, and from a Third World country, sometimes I get into bad experiences over the visa," he said.

But Zaman insists this is a minor obstacle, and he has not let it affect his passion for travelling. What will change his travelling habits, however, is a wife.

"I plan to get married this year. I will still travel, but not so often. And, you know, with a wife you cannot stay at five-dollar hotels anymore," he said.

But until that happens, he is focusing on the journey ahead. After walking through Southeast Asia, he will take a flight to Australia to begin a cycling trip around the Pacific countries, including New Zealand, Fiji and Tahiti.

He also has a photography exhibition coming up in Spain this year and is awaiting approval for an immigration application to Canada.

Zaman's travel photos and writings can be viewed at www.mohaphoto.com.