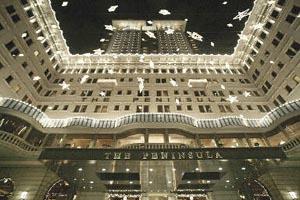 The Peninsula Hotel in Hong Kong, still the 'finest hotel east of Suez'. 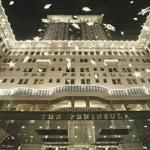 HONG KONG, Dec 9, 2003 - A survivor of colonial Asia now surrounded by the buzz of Asian modernity, Hong Kong's Peninsula Hotel on Thursday celebrates its 75th birthday striving to maintain a once mythic reputation as the "finest hotel east of Suez."

The hotel was inaugurated on December 11, 1928, and still figures today in all the guidebooks to Hong Kong as a sight not to be missed, along with the Peak, and the fabulous shoreline of sky-scrapers which it faces from across the bay. "There are many great and famous hotels in the world, but so far as I know only one is habitually known by its nickname. Mention 'The Pen' to world travellers in any continent, and they will know at once that you are talking about the Peninsula Hotel, Kowloon, Hong Kong," writes British journalist and author Jan Morris.

The attractions of the Peninsula, which counts among its regional rivals Raffles of Singapore and the Oriental of Bangkok, have so often been cited they are nearly cliches.

Today one still sees liveried staff in white gloves rushing discreetly to help guests from the Rolls Royce, one of the hotel's fabled fleet, which has just brought them in from the airport or chauffeured them about town for business or sight-seeing. Another way of making a grand entrance is to arrive roof-side, by helicopter, an added luxury, though one which is not out of reach for clients ready to pay up to 39,000 HK dollars (5,025 US dollars) per night for an exclusive suite.

"We are the oldest, the most expensive, and the last colonial hotel in Hong Kong," says Public Relations Director Sian Griffiths, speaking from the cream-and-gold pillared lobby where society matrons or eager tourists come to partake in the afternoon ritual of high tea, almost an institution within an institution.

The brightest star of the hotel group headed by Michael Kadoorie, scion of a dynasty of Iraqi Jews originally from Baghdad, the Peninsula began life as a gamble. Opening a hotel on Kowloon early last century meant instant exile from the bounds of colonial society, then ensconced on Hong Kong Island. But Kowloon was the last stop on the trans-Siberian rail link bringing travellers from Europe. Passengers arriving by ocean liner also disembarked onto its quais.

Later the location of Kai Tak airport was to be an additional factor in its success. A flair for innovation, an unabashed quest for luxury, a devoted staff (the highest staff-to-guest ratio in Hong Kong) and Hong Kong's own accelerated economic growth did the rest.

Even the hotel's darkest hours have helped in building the legend. It was in room 336, on Christmas Day of 1941, that the British colonial authorities surrendered Hong Kong to the Japanese. And just last spring, as Hong Kong struggled with the SARS epidemic, the "Grand Old Lady", as it is known, was nearly deserted. "We were down to nine guests," said Ms. Griffiths. But since then business is back and the Pen is preparing a gala evening Thursday to mark its 75th anniversary.

Modernized and expanded, with the opening in 1994 of a 30-storey tower built in the original style, the Peninsula remains a "very luxurious caravanserai," in the words of Jan Morris. It houses "Gaddi's," Hong Kong's fanciest French restaurant. On the 28th floor it has added "Felix," a restaurant-bar-discotheque designed by Philippe Starck, where the panorama from the men's restroom urinals is unparalleled, with only a floor-to-ceiling plate of glass separating you from the cityscape.

Moving along with the times, the Peninsula's guests are today dressed in casual clothing, and shorts can be seen in the lobby.