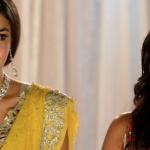 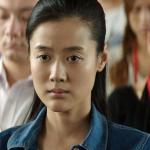 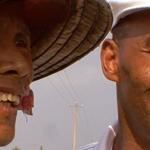 Celebrating its 25th year, the Cinequest Film Festival, held annually in San Jose, Calif., always offers a unique glimpse into the world of independent films on a global scale. Each year, ThingsAsian posts my reviews of Cinequest's Asian and Asia-related entries. This year, only three of the Asian films were available for pre-festival review: Miss India America, Factory Boss, and Healing a Soldier's Heart. In each of these films, a transgression has been committed, and whether trivial or grievous, the characters, both fictional and actual, find closure in atonement.

Lily Prasad is an over-achiever: confident, driven, and...a colossal narcissist. But what she lacks in self-awareness, she more than makes up for in well-intentioned ambition. In Lily's mind, all of life's choices and endeavors are a means to an end; and hers have been meticulously mapped out, from graduating valedictorian of her high school class, to engineering the perfect future with her boyfriend Karim, and becoming a world-class brain surgeon. Failure is simply not an option, and the slightest deviation from her master plan is unthinkable. So imagine Lily's dismay when Karim announces that he wants to travel for a year before starting college.

Amid Lily's tempest in a teacup, her best friend Seema, a young woman of far less grandiose expectations in life, drags a reluctant Lily along to a meet-and-greet for Miss India Golden State, a California beauty pageant that Seema plans to enter. There they meet a few of the potential contestants, as well as Reshma Mathur, Miss India Golden State, and the reigning Miss India America. Afterwards, the two girls head to a nearby park where Seema has volunteered for community service, only to find Lily's boyfriend Karim in a paddle boat on the lake with none other than Miss India America. The ensuing emotional meltdown impels Lily to compromise her values and risk all that she holds dear for a chance to become Miss India America, in hopes of putting the pieces of her perfect life back together.

At Cinequest 25, Miss India America is Ravi Kapoor's directorial debut, as well as the World Premier of his film. And in what could have been just another gratuitous romantic comedy, Ravi Kapoor has raised the bar on the genre. His well-crafted characters are anything but stereotypical, and the actors who play them do so with the kind of ease that makes them believable and endearing, not in spite of, but because of their flaws. The subtle humor is even-handed and engaging. Cinematography is concise yet playful. And with its kaleidoscope of gowns and saris, costume design is dazzling. A winner in every category...Miss India America deserves a tiara all its own.

This tense drama offers its audience a glimpse into the world of China's mass production industry as Lin Dalin, founder and CEO of a doll factory tries to pull off the impossible at the expense of all involved, from the humble assembly workers, up through the ranks to his right-hand man. With public outcry over working conditions, and the dwindling demand for Chinese-manufactured exports, Lin Dalin must rob Peter to pay Paul if he wants to keep his sinking business afloat. Toward that end, he reluctantly agrees to produce a massive order with a short turnaround by any means necessary, and at little or no profit to show for it on his bottom line.

Regardless of the fact that his formerly loyal and diligent employees haven't worked in six months, and are due substantially delinquent back pay, they are grateful for the chance to return to work in hopes of getting the company back on its feet and collecting what they're owed. But Lin Dalin is soon up to his neck in quicksand as fiscal expenses come due, and a cadre of building inspectors and work ethics investigators descend upon his impending catastrophe. Just when it seems things couldn't get any worse, an undercover journalist leaks the truth about what's really going on inside the walls of the Dalin Doll Company.

Although painful to watch, horrifying even, Factory Boss is an unflinching look at the inner-workings of an industry with exploitation at its core. From the suppliers of raw materials, to the factories that produce superfluous products, to the wholesale importers and retailers who fuel their production, to the consumers who purchase them, everyone is guilty of something; and the workers, desperate to keep rice on their tables and shelter over their heads, are the ones who pay the ultimate price.

In a unique approach to healing Post Traumatic Stress Disorder (PTSD), Dr. Edward Tick guides Terry Bell, Michael Broas, Bob Reiter, and Larry Turner, four Vietnam Veterans, on a journey inward to the source of the trauma they have carried with them for more than forty years. Throughout this visceral process, Dr. Tick asks these men to recall the horrors they witnessed, as well as those they caused, and to own their part in it. He encourages them to speak candidly about the lingering effects of PTSD on their lives, including isolating from family, depression, drug use, alcoholism, and thoughts of or attempts at suicide.

And then he takes them on an actual journey: back to Vietnam, to the scene of those events that haunt their nightmares and gnaw at their souls. There they face the victims of that war as flesh-and-blood human beings rather than as simply: The Enemy. And amid the boundless blessings of compassion and forgiveness, these four veterans are given the chance to confess their remorse, to bestow gifts of goodwill, to enact meaningful and cathartic rituals, and to return to their lives with a sense of closure and renewed hope for a future they never dreamed possible.