Bamboo - A Valuable Resource for Asians 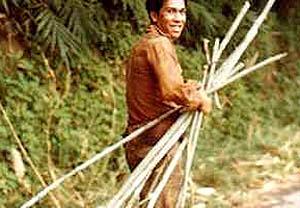 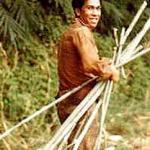 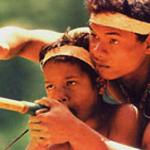 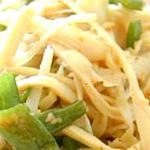 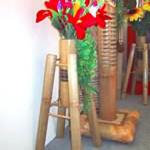 The bamboo plants that have become an important part of the Asian culture and tradition over the centuries, are still a resource rich enough to be weaved for their commercial value. With depleting natural timber trees, bamboo seems to be a viable alternative. Its life habits are enthrallingly eccentric. It reputedly grows faster than almost any other plant - at time, it is actually possible to see it grow...for the bamboo has been known to grow more than four feet in a day. The beauty about the bamboo is that fact that it grows easily in any type of soil, as long as it is not in swampy or saline areas.

A tall-tree-like perennial grass of the family Gramineae and the sub-family Bambusoidae, bamboo is found from tropical and subtropical areas to mild temperate regions, with the heaviest concentration and largest number of species in South East Asia and on the islands of the Indian and Pacific Oceans. It is also found in Taiwan, China and Japan. Although it thrives in the tropical climate, it cheerfully survives frost, ice and even snow.

So different is this grass-tree that botanists even give it special terminology. Instead of a trunk, it has a culm - which defines the bamboo's hollow stem and characteristic joints. Moreover, the more familiar roots and shoots are supplemented by rhizome, which connects the fertile network of underground shoots from which new sprouts grow. Its culms often form a dense undergrowth that excludes other plants and range in length from 10 to 15 centimetres to more than 40 metres. The foliage leaves have stalked blades and are borne on branches. Most bamboo plants flower after years of vegetative growth and reproduction. And such flowers usually herald a plant's death. Nobody knows exactly how or why this occurs.

Bamboo's practical uses are unequal. The first paper made by the Chinese was from bamboo, and during the Maharaja days in India, it was used to make newspaper and writing paper.

Today, bamboo is used to make joss paper and high-quality Chinese painting paper. Highly prized Chinese caligraphy brushes still uses a bamboo handle! In the Philippines, especially the poorer regions of southern Mindanao, the giant grass is highly prized by the poor who use them to build their homes. Houses with bamboo flooring and walls are common in villages and major towns like Zamboanga, Jolo, Bongao, Isabella and Puerto Princessa, to the extent it is considered as "wood for the poor".

So varied are its uses for the traditional indigenous community have weaved tales about the uses of bamboo. If you are ever ambushed by a wild tiger or even a raging elephant in the jungle look for the nearest clump of bamboo and hide yourself among its hardy reeds ... thus goes the advice of Orang Asli (indigenous people of Malaysia) elders to young men who are about to journey on their first hunting expedition.

By itself, a single bamboo reed is weak and brittle. But the bamboo plant offers strength in numbers and even an elephant's force is useless against it, say Asli elders. For the Orang Asli in general, the bamboo, with its numerous uses, is perhaps one of the most revered of all plants in the Malaysian jungle, and over the years it has become a part of their culture.

Some tribes carve blowpipes using the toxic type of bamboo, while others use various types of bamboo as building materials. The bamboo is also important in the construction of rafts, houses, water pipes, music instruments, kites and traps for animals and fishes. The valuable bamboo shoot is a delicacy among many Asli tribes.

Among the modern community, this humble plant is still very much in demand all over Asia. In the steaming jungles of Borneo, the Dayaks still use it to carry water. In Beijing and Bangkok, its shoots are a valuable addition to many dishes. In Japan, nimble-fingered craftsmen fashion it into fans, flutes and other lovely handicrafts. It is even imported to the United States, where interior decorators use it to trim elegant flats, giving it a "tropical touch".

Yet in the midst of all these practicalities, bamboo is sumptuously intertwined with the roots of Oriental culture, with its legends and history, its poems and paintings. In the mists of prehistory, the Chinese have already honored bamboo as one of the revered Four Plants: the orchid, the plum tree, the chrysanthemum and the bamboo.

Bamboo symbolized the divine Buddha for some communities, others personify philosophers Confucious and Lao Tzu (Sun Tzu). As a group, they represent the three most influential concepts in Chinese history.

Apart from man, several species of animals, birds and insects have struck unique relationships with the bamboo plant. Several species of rodents are known to live in dead bamboo poles. Most of them bore tiny holes that they fit into with great difficulty. This

they do to protect themselves from predators such as large snakes. Larger jungle rats thrive on bamboo shoots, and these yellow-furred creatures can frequently be found in bamboo forests.

The wild bamboo is also home to a species of tiny tropical bat which enters the stem through thin slits. Among birds, woodpeckers are fond of the bamboo plant and are known to construct nests in certain bamboo species. The porcupine is another tropical animal that favours the bamboo plant, and it can be seen foraging for food in bamboo forests.

Several species of insects have a special fondness for the bamboo. Beetles, or the bamboo borer (dinoderus minutus and the less popular dinoderus drevis) feed on the starch found in the walls of processed bamboo poles.

Apart from its value to certain species of wildlife, the larger bamboo species supply poles which make excellent material for the control of soil erosion. Bamboo, which is planted on slopes somehow manages to hold the soil together.

Upright in its straightness, flexible in its pliancy and redoubtable in its strength, the bamboo is gifted with all qualities of a perfect person. As practical as wheels and as useful as the caveman's first stone adze, the bamboo brings together a tantalizing and unique microcosm of talent, esthetics and plain charm.