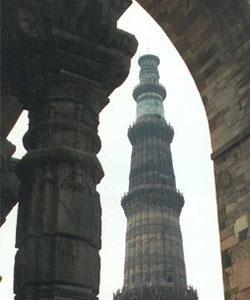 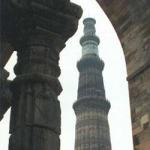 From the distinctive aroma of Indian curry, the colorful array of sarees and the exotic array of culture and heritage, India is a country that evokes all your senses. With its more than one billion population, culture and history is certainly something visitors can enjoy a lot of in this subcontinent. Our first sight of India was a tad deceiving -- while taxing on the runway at the Indira Gandhi International Airport in New Delhi, the capital of India appears crisp and modern like any other top cities...not much character one would say. That was what we thought until we stepped out of the modern airport complex right into the streets of India.

The initial step was getting over the shock of seeing people everywhere...little children wrapped in a cloth and tied to their mother's back, old men sitting along the pedestrian walkway begging for money and women dressed in colorful sarees peddling by the streets -- selling everything from exotic tea to cheap perfume and flowers. The next thing to get use to was the smell that wafts through the air --- a strange blend of spice, flowers, coconut oil (which many Indians use as hair-cream) and human sweat. Yes, it took just five minutes to see that India's population tops one billion!

In the midst of what appears to be chaos at first glance, you will soon understand that there is a system in the midst of the confusion. Cars and buffaloes move steadily enough through the throngs of people --- many who venture beyond the pedestrian walkways onto the roads. As our cab moved through the busy streets in downtown New Delhi, we begin to see the beautiful historical buildings in the city.

Delhi can trace its origins through the "beginning of times" so to speak, way back to the times of the ancient days of the Mahabhrata war. This city has certainly stood the test of time for since 1450BC when it was known as Indraprashta, Delhi has stood strong through invasions and colonizations, braving through various religious, social and cultural revolutions over the years. With the invaders and colonizers came the different styles of buildings Delhi is known for.

From Lal Kot, Qutb-ud-din-Aibak, Siri, Tughalakabad, Ferozabad, Delhi Sher Shai and eventually ShahJahanaBad, these were all the capitals of the Indian empire by the different rulers of India. These cities are all located in what is known as Delhi today --- a combination of both Old Delhi and New Delhi. There have been at least eight capital cities around modern Delhi. The city has seen the life and death of many empires and have resisted many attempts by invaders to destroy her. In the 12th Century, the Chauhans, a Hindu dynasty, made Delhi the center of the Hindu religion. Later on Qutb-uddin-Aibak occupied the city and this marked the beginning of what turned out to be six and a half centuries of Muslim rule, including that of the mighty Moghuls.

In 1739, Delhi was invaded by Persian warload Nadir Shah, who made off with the Peacock Throne. The Peacock Throne is a fabulous gold chair that has been sat on by the Iran monarchy since the days of Nadir Shah. The Peacock Throne is one of seven thrones ordered by Shah Jahan. This chair is 6 feet by 4 feet and is made of gold and encrusted with diamonds, rubies and emeralds. The diamonds were noted to be 10 to 12 carat diamonds, and the rubies -- over 100 in all, are between 100 to 200 carats. A jeweled ornamental peacock on the top of the throne is made from blue sapphires, gold inlays, a arge ruby and a 50 carat pearl. Today, part of the throne is on display in a museum in Tehran, Iran.

From the rocky hills of Aravalli in the south to the Yamuna River tracking northwards, Delhi's intricately carved forts and historical buildings blends nicely with the lives of its inhabitants -- all eight million of them.

One of the most striking buildings in Delhi is the incredible Qutb Minar, which was built by slave-turned-king Qutb-ud-din-Aibak, who built the monument in the honor of his master in 1199. Its architecture is of early-Afghan period...with an ornate tower made from marble and sandstone. A year later, another ruler called the Firoz Shah Tughlaq renovated the tower and added a fifth storey to the original four storey structure. Today, visitors to Qutb Minar can also see the remnants of destroyed structures of the earlier Hindu dynasties (the two rulers mentioned above were Muslim rulers), such as the Iron Pillar dedicated to Hindu God Lord Vishnu and friezes dedicated to another Hindu God, Lord Ganesha.

In another part of Old Delhi, a great mosque known as the Jahan Numan can be found. This was the last structure built by Mughal Emperor, Shah Jahan before he was overthrown and imprisoned. It is another symbol of both architectural excellence and opulance...this huge mosque, the largest in India, took over 6000 laborers, engineers and sculptors to build. Simple yet striking like the Taj Mahal (it is postulated that the same engineers and architects were hired to built both structures), the Jahan Numa Mosque consists of three gateways, four towers and two minarets standing 40 metres high, with walls built from alternating red sandstone and white marble.

Along the serene environment of Yamuna River lies the Mahatma Gandhi Memorial. This memorial is to reminisce the struggles of Mahatma Gandhi, who led a mass movement of passive and peaceful protest against the British rule. A black marble platform marks the spot where Mahatma Ghandi was cremated after his assasination in 1948.

Another highlight in Old Delhi is the Humayun Tomb. Humayun second Mughal Emperor, who ruled briefly before he was overthrown. This tomb was built by his Persian wife, Hamida Begum. It took eight years to complete and its architecture is almost entirely Persian. This is the first known Indian building to use the Persian double dome design. The most notable Indian elements are the small chatris on the roof of the tomb. Apart from this, the Humayun Tomb is noted for its intricately inlaid tiles and carvings combining both Indian and Persian designs. The Humayun Tomb is regarded as the prototype of the famed Taj Mahal due to its combination of white marble and red sandstone used to build the external walls.

There is a gate separating Old Delhi from New Delhi. These gates are known as the Lal Qila or Red Fort, originally built in 1648 by Mughal emperor Shah Jahan. The fort itself contains all the luxuries typical of the Mughal government, complete with huge halls, domed marble palaces, posh private apartments and elaborately designed gardens within the fort. At the entrance to the fort lies the Lahore Gate (as it faces Lahore, now part of Pakistan).

The Lahore Gate holds great significance for Indians as it was here that freedom fighters and national leaders of India deliver important speeches. In fact, Jawarhalal Nehru, the first Prime Minister of India, unfurled the modern Indian flag here on 15 August 1947 to mark the end of the British rule in India. The Red Fort also houses the Hall for Audiences, where the Mughal Emperor used to sit on the Peacock Throne while granting private audiences.

This is the same Peacock Throne taken by Nadir Shah to Iran when he attacked Delhi during the later stages of the Mughal Empire. The Red Fort separates the Royal City of ShahJahanaBad from the rest of the city. However, Shah Jahan, more renowned as the emperor who built Taj Mahal as a symbol of love to his wife, only reigned for six years in ShahJahanaBad as he was ousted by his son Aurengzab and imprisoned in the Agra Fort in the old capital of Agra.

Eventually, British colonized Indian in 1803 and made New Delhi the capital of the British Indian Empire in 1911. Hence, outside the gates of the Red Fort in New Delhi, travelers can see Victorian-inspired buildings such as the India Gate, Connaught Place and the Parliament House.

The Connaught Place is the heart and pulse of New Delhi. Here is where shops, bazaars, restaurants, offices and hotels are located. This is the shopping center for travelers --- where almost everything can be gotten for a price: textiles, jewelery, antiques and handicrafts from streetside vendors, bazaars and classy emporiums. An underground mall near the Connaught Place known as the Palika Bazaar has a variety of higher quality goods. However, just like anywhere else in Delhi, one must bargain hard in order to obtain a good deal.

Next to the INA Supermarket in downtown New Delhi, there is a culture and craft market known as the Dilli Haat. This craft market features craftspersons from different regions in India showcasing their local handicrafts, thus providing travelers an interesting insight into the richness and diversity of Indian culture. It is spread over an area of approximately six acres. Apart from the crafts, there is also a section featuring the main cuisines of the different states of India.

Delhi today is truly the melting pot of India, and the main gateway to one of the most fascinating cities in the world. From its historical forts and monuments, to its high-technology industries and hypermarkets of the modern world, Delhi is certainly one interesting destination, bringing within its fold people of all ethnic groups, each with their unique traditions and cultures.