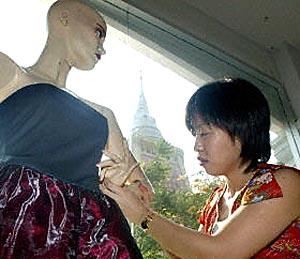 A Thai design student works on a creation during her fashion course at the Wat Dammamongkol temple in Bangkok. 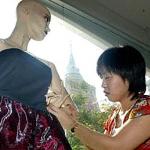 Bangkok, March 28, 2004 - Thailand's quest to become the fashion hub of Asia has found a champion in the unlikely guise of an octogenarian Buddhist monk who has set up an Italian design academy in his Bangkok temple.

"I got the idea about eight years ago, when I met two Italians who came to sculpt a jade Buddha image for this temple. It was very different from others in Thailand, the Italian design was so smart, bringing the statue to life," said head monk Luangphor Viriyang Sirintharo.

For the past three years, the 84-year-old who himself eschews fashion in favour of his faith's traditional saffron robes, has watched over Thailands only internationally recognised fashion school at the Wat Dammamongkol temple.

"I am a Buddhist monk, but I am also a Thai person and I love my country and if I can help I will. Around Thailand no one has set up a top 10 design school for students and I want Thai design students to have the very best."

The temple, which houses the worlds largest jade Buddha, looks set to play a key role in Prime Minister Thaksin Shinawatras 1.8 billion baht (456 million dollar) campaign to transform the capital into the Paris of Asia.

The "Bangkok Fashion City" initiative, which aims to revamp Thailands reputation as a haven for fake versions of Rolex, Gucci and Louis Vuitton designs, was launched in February with shopping centre extravaganzas and a fashion street parade big enough to shut down the centre of the teeming city.

The government hopes to open its own Bangkok fashion school later this year, but until that happens, budding Thai designers will continue to get their only foot-up in the industry from Luangphor Viriyang and his team.

"About 50 or 60 years ago all education in Thailand was done in the temple, so there is no problem about teaching fashion here, but some designs we cant do in the temple and also female mannequins so we have a classroom just outside for those things," he says in his humble office at the temple.

The school is run by the Accademia Italiana design institute, which sends teachers from its Florence headquarters to instruct Thai students in fashion and interior design.

Some 100 students are split between the two courses and the cream of the crop are sent to complete their masters in Italy, where one has already taken second place in the prestigious Italian design competition, the Echi di Luce.

The 2,500-dollar annual fee is high by Thai standards but a fraction of the cost of going abroad, and the temple academy tries to subsidise needy students.

Accademia Italiana director Vincenzo Giubba, who negotiates between meditating Buddhist devotees to reach the classroom door, says the goal is to promote a unique design sense, capturing the creativity which abounds in Thailand.

"We just teach them design. Not Italian style or design, but techniques which I hope will inspire them to create hundreds of different and original styles," he says.

"When you say 'Thailand', people think of fakes (counterfeit designer clothes), so what we want to do is harness the high level of craftsmanship and quality material here with original designs."

In Thailand, temples play host to everything from AIDS hospices to tiger sanctuaries, so a fashion school housed next to the worlds largest jade Buddha has raised few murmurs of disapproval.

"Its very quiet and peaceful and you dont have any distractions like department stores in the city, so you can concentrate and stay focused," says 22-year old interior design student Manapiti Ramasoot.

"I think we can get a lot more original design coming out of Bangkok because the head monk Luangphor Viriyang Sirintharo was ahead of his time in seeing Thailand as a home for great designers and brands."

Academy graduate Choengchaichan Meesanka -- who plans to run his own design business after gaining more experience in the industry -- says the temple is a blessing for design buffs.

"Before the school was opened design lovers like myself could find no place to develop and this school gives designers a chance, a first step if you want to be a great designer."

The teachers say that, surprisingly, while the monks and students settled into the situation readily it was they who had to work hardest to adapt to working side by side with saffron-robed seekers of non-materialism.

"I was the first fashion teacher to come here and the students didnt even talk to me for three weeks and I had to be very creative. The first semester was very tough," said German fashion instructor Bianca Konhauser Scheer.

"But I think the monks got used to us foreigners and the teachers coming now dont have any problems adapting."

Sheer says one drawback may be that the atmosphere of Buddhist serenity surrounding the course is very different from the cut-throat world of international fashion.

"There will be for sure some good designers coming from this school, but I really encourage the students to get out and do a lot of work experience in the industry because what this school cannot teach them is what a really, really tough world the fashion industry is to survive in."